Did you know how Dara Singh was chosen to play Hanuman in Ramayan?

Ramanand Sagar could not think of anyone else other than Dara Singh when it was the question of who would play the role of Lord Hanuman. 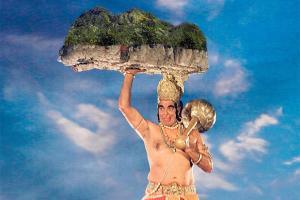 
Ramayan, the immortal tale of Lord Ram is entertaining millions as its telecast on India's leading GEC StarPlus. Ramanand Sagar's cult classic enamoured the entire nation with its heart touching rendition of the mythological saga. With an engaging storyline and impeccable performances of Lord Ram, Laxman and Sita essayed by Arun Govil, Sunil Lahri and Dipika Chikhlia Topiwala the show marked a special place in the hearts of viewers. Another noteworthy performance was of Hanuman essayed by veteran actor – Dara Singh. It's a little-known fact that he was the only choice to play the coveted role.

Dara Singh's son Vindu Dara Singh shared, "It's a fantastic moment for all of us to watch Ramayan together as a family. My father, Dara Singh essayed the role of Hanuman in this classic tale and we are proud of him. I am also happy that today's younger generation is getting an opportunity to watch this beautiful series and it shall also instill good values amongst children. Interestingly, my father had essayed the role of Hanuman in a movie titled 'Bajrang Bali' which was a hit. Ramanand Ji was like our family member and one day he called my father for a meeting and said that he had seen a dream wherein my father was playing the role of Hanuman in the series and he won't take no for an answer. The rest as we all know is history."

The part of Hanuman in Ramayan is one of the most exciting bits as he is a steadfast devotee of Lord Ram and plays a major part in the battle against Ravan. Tune in to the epic mythological tale of Ramayan at 7.30 pm everyday only on StarPlus.