Amid news that Naagin 4 was being cancelled and its cast shown the door, Nia Sharma has backed producer Ekta Kapoor in the matter. 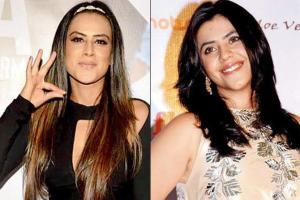 
There has been a lot of buzz surrounding Ekta Kapoor's popular TV show Naagin 4 - that the show was being shelved and its actors were being shown the door. In such circumstances, producer Ekta Kapoor took to Twitter to explain the situation once and for all.

In a video she posted yesterday, Ekta Kapoor clarified that they are not shutting the fourth season abruptly and, in fact, they have something significant planned for the show. Naagin 4 will have an ending post the lockdown, which will immediately be followed by Naagin 5.

Ekta also heaped praises on the cast of Naagin 4 including Nia Sharma, Vijayendra Kumeria, Jasmin Bhasin, and Rashami Desai. "I messed up a bit (and) hope to make up to you all soon. Till then let's give everyone the best season 4 finale ever," Ekta added.

To this, Nia Sharma took to Twitter and wrote, "Someone of your Stature owes no explanation! Yet you've been so considerate to have taken it upon yourself, said things that mean the most for us at this moment. I immensely respect your gesture! 'Ekta Kapoor'"

Someone of your Stature owes no explanation! Yet you’ve been so considerate to have taken it upon yourself, said things that mean the most for us at this moment. I immensely respect your gesture!
‘Ekta Kapoor’ ðu00c2u009fu00c2u0099u00c2u008f https://t.co/TLcwFIKMi7

So, if you've been a fan of this supernatural series, you will still have something to look forward to after the lockdown is over!

Next Story : Did you know how Dara Singh was chosen to play Hanuman in Ramayan?