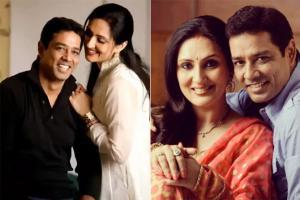 
It's actress Juuhi Babbar Sonii's birthday today. The actress, daughter of Raj Babbar and Nadira Babbar, turned 41 this year and her husband-actor Annup Sonii had one adorable birthday post for her. The Crime Patrol host took to Instagram to share a video, a compilation of some romantic pictures with his wife.

Take a look at the video:

Annup Soni was earlier married to Ritu. The couple, who has two daughters, ended their six years of marriage in 2010. In 2011, Annup married actor-turned-politician Raj Babbar's daughter Juuhi Babbar. It is said that Juuhi and Annup met while working in Juhi's mother Nadira Babbar's play.

Before marrying actor Annup Sonii, Juhi was first married to filmmaker Bejoy Nambiar, a screenplay writer, best known for films like Shaitan and Wazir. She married Nambiar in 2007, but after a two-year courtship, they divorced in January 2009. Annup and Juuhi have a son - Imman, who was born in 2012.

Next Story : Telly Tattle: Fire on sets of Kumkum Bhagya