Anita Hassanandani and Urvashi Dholakia went down memory lane to reminisce some good old days from the shooting of their show Kabhi Sautan Kabhi Saheli which aired 20 years ago. 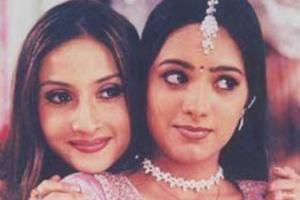 
Indian Television's most popular vamp ladies Urvashi Dholakia and Anita Hassanandani recently got together for a fun and candid chat on the latter's ongoing digital talk show 'Trending Now'! Amongst all the girly talks, Anita and Urvashi went down memory lane to reminisce some good old days from the shooting of their show Kabhi Sautan Kabhi Saheli which aired 20 years ago! The two girls went candid in a chat show on Urvashi's Youtube channel. The latter shared a snippet of it on her Instagram handle.

One with our gorgeous #Naagin which she is for all of u but for me she is my Saheli ðÂÂu00c2u009fÂÂu00c2u0098ÂÂu00c2u008daka @anitahassanandani ! To check out our fun chat go to my youtube channel! Link in the bio! Don't miss this one out for sure! . . . @trendingnowwithurvashi #LinkInBio #TrendingNowWithUrvashi #ChatShow #UrvashiDholakia9 #EpisodeEleven #TalkShow #WebShow #YouTube #YoutubeShow #CheckItOut #AnitaHassanandani @youtubeindia @youtube

While that show helped form a strong bond between the two, Anita also revealed that there was a time when she was so much in awe of the way Urvashi presented herself back then, that she would literally stare at her like a hawk when Urvashi did her makeup and hair for scenes!

Check out the candid video between Urvashi Dholakia and Anita Hassanandani:

Anita even went on to tell Urvashi that over these years whatever she has learnt about dressing herself up is all inspired by Urvashi's way of doing it all so well!