Bobby Deol shares another video of Aashram, to release on this date 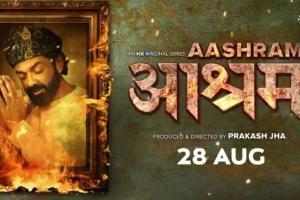 
Ever since the last two years, after the release of Race 3 and Housefull 4, Bobby Deol is back to signing multiple projects. He already has Class of 83 coming up on Netflix, where he essays the role of Dean Vijay Singh, he now has another show coming up that looks promising.

Produced and Directed by Prakash Jha, the series is called Aashram, and it's all set to release on August 28 on MX Player. Prakash Jha and MXPlayer want to avoid controversy and have issued disclaimer before trailer launch.

Have a look at the video right here:

And that's not all, in case you missed it, he shared another video of the show a few days back. Here it is:

Here is the first look of #Aashram, i am looking forward to seeing it together with you all on August 28, 2020 only on @mxplayer directed by #PrakashJha @prakashjproductions @iamroysanyal @aaditipohankar @darshankumaar @adhyayansuman

Talking about Jha, the man is known for making political dramas and films that are driven by reality and robustness. After exploring the theme of family dramas in Rahul and Dil Kya Kare, Jha changed the language of his filmmaking with films like Gangaajal, Apaharan, Raajneeti, Satyagraha, and Jai Gangaajal.

Coming to Deol, he made his Bollywood debut with Barsaat in 1995 and went on to star in films like Gupt, Soldier, Kareeb, Badal, Bichhoo, Ajnabee, Humraaz, Apne, and Yamla Pagla Deewana.