The shoot of Made in Heaven 2, which was to kick off next month in Europe, postponed after government's temporary suspension of travel visas. 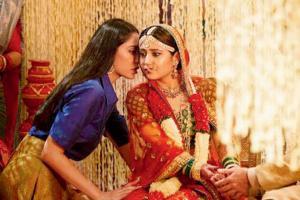 A still from Made In Heaven


With the count of coronavirus cases rising to 73 in India, the ripple effect can well be felt in showbiz. Even as the makers of big-ticket summer films have begun deferring their releases, several shoots are being cancelled in the wake of the pandemic. Among the many projects affected is Zoya Akhtar and Reema Kagti's much-loved series, Made in Heaven. mid-day has learnt that the second season of the Sobhita Dhulipala and Arjun Mathur-fronted show, which was to go on floors next month, is now postponed. This development comes in light of the government's suspension of almost all travel visas starting today in its effort to contain the spread of COVID-19.

Turns out, the second season of the wedding drama was to be shot in Europe, with plans afoot to head to the locales by the first week of April. A source close to the production reveals, "This time, the script was designed to include more destination weddings. The unit, headed by Zoya, Reema and Nitya Mehra, were planning to shoot in different parts of Europe, including Spain and Italy. However, given the lockdown in certain countries in Europe and the latest suspension of visas in India, the schedule remains cancelled till May. Only after May will the team take a call on when they can resume work."

A unit hand informs that the team was contemplating kicking off the filming with a schedule in North India, thereby not losing out on time. "But everyone agreed that given the current scenario, it's safer to postpone the shoot altogether until the situation gets better." Naturally, this move will impact the show's release. Initially slated to drop online in January 2021, the makers are apparently now eyeing a mid-2021 release.

mid-day reached out to Amazon Prime and Akhtar, who remained unavailable for comment.

Next Story : Hitlist Web Awards postponed due to Coronavirus outbreak