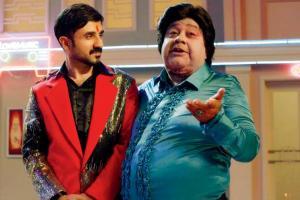 No, this is some kinda joke, right? Sure. That I'm unable to get? Evidently. What should, in the very least, be funny about this show still — given that it features a bunch of Hindi stand-up comedy sets/acts, over about 300 minutes, of a ten-episode run?

They had one job. Not even one joke — intended or otherwise — could manage to draw out from my permanently morose face even a modicum of a smile, forget a vague grin. The only thing seemingly faker than this floundering series is the canned laughter for audiences watching the stand-ups within it.

Or, maybe, that's deliberate too. Perhaps there is some seriously deep Rushdie/Marquez style magic realism running underneath — with a dead man walking, talking, and living folk (like us) watching all of this totally puzzled on screen, and dying out of exhaustion. Or could it be that some nut/bolt from Martin Scorsese's King Of Comedy has gone missing, but simply doesn't fit?

Watch the trailer of Hasmukh

The only sense I could make of this series is from its tagline. And that could well be its log-line. It goes something to the effect of how the lead character, a stand-up comedian, has to "kill off-stage, to kill [it] on stage." How clever. You also don't need further explanation. The sentence is implied/applied absolutely literally.

Lead character Hasmukh has stage fright. The only way for him to get over his nervousness, and deliver third-rate jokes for small-town morons sitting before him, is by killing a human being, before he gets on stage. Otherwise he can't get the "feel". You can't, even when he does. Eventually this man-eating boy moves to Mumbai.

Frankly if this was really the concept-note handed over before starting off, one can't even blame the writer/s. How does one contain an already 'phailaoed' (spread) raita? My sympathies equally lie with the director, who must do what else, besides ensure the series is competently shot, and reasonably well-enacted.

And that it is — even while we go from nowhere, towards nothingness. No knock on leaps of faith. Since this isn't quite a comedy, is this a zombie series? Could've been, since the serial killer for the protagonist is impossible to empathise with — let alone relate to, anyway.

Just seems like something that's been 'chipkaoed' (slapped on) for the sake of it. Which is true for so much of what on occasion flies for Indian content on Netflix. Whether that be the juvenile Jamtara (2020), the last desi original, also set in a small-town, that I watched on the platform. Felt like a poor man's version of Prime's Mirzapur (if that's even possible).

Or the Hindi film House Arrest (2019), that I could only finish over five instalments, wondering if it can get worse; sure it can. Speaking of fiction done/directed by stand-up comedians per se, even series like Biswa Kalyan Rath's Laakhon Mein Ek or Zakir Khan's Chacha Vidhayak Hain Humare (that I'm streaming right now) on Prime, seem so sorted in comparison.

And yet on paper there is nothing wrong with a bunch of top producers lending heft to Hasmukh. It stars Vir Das in the lead. As a really sharp, astute stand-up comedian — being one of only six in the world with three Netflix stand-up specials up already — he might well be better-known among the platform's international viewers than say Shah Rukh Khan, maybe?

Back home he's without doubt the Nawazuddin Siddiqui of the alternate comic scene. He's done quality content — all of it deeply rooted in the Indian (urbane) milieu. A lot of which has found appreciation abroad. As Hasmukh, he plays a hardcore, gareeb UP-ite, born and raised in dark boondocks called Saharanpur, where life's cheap, and bullets cheaper still.

His uncle's a torturer, and his aunt from ALTBalaji's Gandi Baat, who can't have enough of him. Does he even look the part; forgive, for a second, how he sounds? Honestly, it's a lot like watching Nawaz do a Netflix stand-up special (in English). Have listed reasons above why I was excited about this show. Bro, you lost me at hello.

Next Story : Anushka Sharma shares a glimpse of her first OTT venture, don't miss it