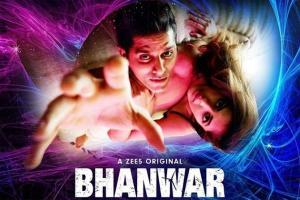 
Actor Karanvir Bohra's brand new web series Bhanwar is all set to take over the screens with its unique conceptualization, interesting storyline written by director Deepak Pachori and out of the box performances. Not only will Karanvir be seen acting in this upcoming ZEE5 series, but it also marks his debut as a director for the project.

Speaking about the show's concept and exploring the directorial side through Bhanwar, Karanvir talking to mid-day.com said, "Bhanwar is a show that we had shot through the lockdown, which was shot with just 4 people, comprising of Priya Bannerjee, myself, a girl from the production team and my cameraman Raju Gauli along with Teejay and Mantra. The show is based on time travel, and what makes it stand out is that no show has been made on similar lines. It marks my directorial debut with it. All these years of being in the industry, working as an actor and even getting to explore what goes on behind the camera really helped me, so it's one project I am very excited to showcase to the world." Bhanwar is set to release on August 18 on ZEE5.

Karanvir Bohra was last seen in the web series The Casino. 10-episode series tells the story of a rich yet humble boy, Vicky, who is the heir to his father's multi-billion-dollar casino. It is set to unfold a world of mystery and conspiracy in high society. It also stars Sudhanshu Pandey, Mandana Karimi, Aindrita Ray, Dhanveer Singh, Mantra and Sudhanshu Pandey in pivotal roles.

Karanvir, who is best known for his role in Shararat, got married to Teejay in 2006. The couple shares two twin daughters, Bella and Vienna. The actor started his career on TV with Just Mohabbat and became a household name with shows such as Kasautii Zindagii Kay, Dil Se Di Dua... Saubhagyavati Bhava?, Qubool Hai and Naagin 2 among others.

Next Story : Akshay Kumar's digital debut will go on floors by second half of 2021