Why did Vidya Malavade get emotional while shooting for Flesh?

While shooting for Flesh, actor Vidya Malavade got emotional and this was the reason behind it! 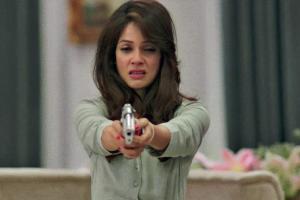 Vidya Malavade in a still from her upcoming web-series, Flesh/Picture Courtesy: PR


Eros Now recently launched the trailer of Flesh and it has already garnered huge appreciation. Viewers will be taken on a journey that will see characters going deeper into the murky world of human trafficking. Actress Vidya Malavade who plays the role of a doting mother in her upcoming web series Flesh says it was a unique experience for her to play such a physically and emotionally strong character.

Over the years, the actor has given stunning performances including Chak De! India. She has a cheerful personality but while shooting for Flesh, Vidya Malavade shared that she almost went hysterical. Although everyone on the team always tried to keep the atmosphere as light-hearted as possible, Vidya became emotional.

It happened during a schedule where Vidya had to beat up a man. Vidya said, "Filming the scene proved to be incredibly emotionally triggering for the entire cast and crew. The scene evoked a lot of intense emotions in everyone on set because the topic itself is very sensitive. There's no doubt that a lot of the other dramatic moments in the series hit the cast members hard but there was something about that scene that was a little more intense. It was a tough role to play. Beating up someone and to hold on to the emotions of rage and pain was a challenging task because inherently I’m not the kind of person who would lash out on anyone."

Flesh is a crime-thriller based on human trafficking. It also stars Swara Bhasker in the lead role along with Akshay Oberoi and Mahima Makwana. Flesh is written by Pooja Ladha Surti and is directed by Danish Aslam. The series will stream on Eros Now from August 21.

Next Story : Karanvir Bohra writes an open letter to his audience, makes a plea