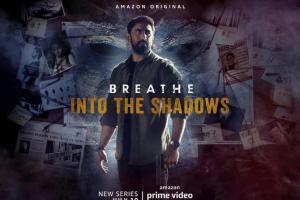 
Amazon Prime Video's 'Breathe: Into The Shadows' released on the 10th of July and received rave reviews for its engaging storyline and thrilling content. The series sees Amit Sadh play the role of Inspector Kabir Sawant and in a recent interview, the actor opened up about his character, the response that it received and much more.

Talking about the response to him reprising his role as Senior Inspector Sawant, Amit shared, "I have always believed that character is more important than screen time. Kabir's character is not just my success - it is the success of the whole team. I am glad to see that the audience is loving my character on the show. The credit for the phenomenal character Kabir Sawant goes to all those who have worked very hard and done a fine job of shaping the character. If I can be selfish for a second, I would say I am extremely thankful, touched and numbed to see this kind of response. In all honesty, I have never received such an overwhelming response to my performance in my 14 year career span since my television debut – it is a humbling experience."

Talking further about taking up roles that are 'quiet but strong', the actor further added, "There is no preference towards a silent role as such. Personally, I am mad about acting and it brings me pure joy to come in front of the camera and play the role created by so many geniuses behind the screens with conviction. With Kabir Sawant though, the way he intertwined with my personality and resonated with the audience was special. The dark and gripping character is what attracted me towards this rollercoaster ride."

Amit opened up about working in films, TV and OTT and his experience transitioning between the different formats. The actor shared, "It was never a cake walk for me to enter the Hindi film industry and experience this transition. However, Breathe is a show that I will always hold close to my heart. I have been connected to Breathe for four years now. I believe, there's no difference in the three platforms in terms of performance because the entire process is the same. It's never like we do less for OTT or do slightly more for films. We equally put our 100% irrespective of the medium. The difference can be seen in terms of the audience reach and ultimately, It's good to be part of different spaces so that you are engaging with different kinds of audience."

Created and produced by Abundantia Entertainment, the all-new psychological crime thriller sees Bollywood superstar Abhishek Bachchan make his digital on-screen debut as he plays a doting father in search of his missing daughter. This show also features one of South India's leading actors, Nithya Menen, who makes her digital debut as well. Actor Saiyami Kher also joins the cast in a prominent role. Prime members in India and over 200 countries and territories can now watch all episodes of Breathe: Into The Shadows, in multiple Indian languages such as Hindi, Tamil and Telugu.

Next Story : Hrithik Roshan to give desi twist to Night Manager?