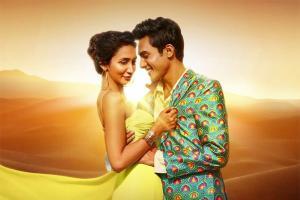 
Amazon Prime Video's latest musical drama finally released today and has been recieving appreciation from all across, changing the game and releasing something different in terms of its concept and storyline- a musical drama.

The makers, before the release had released songs back to back, the various BTS of the songs, the fun on sets and how it had been a beautiful magical journey to shoot this musical drama which had been loved by all which also fuelled up the excitement for the release. The musical trio of Shankar Ehsaan Loy have worked their musical skills and truly captured the minds with their knowledge as music is the essence of the series.

The layers that every character has unfolded, as the series proceeds is sure to keep you glued to the screens for understanding their next move. The precision and depth of every character has given a great polished detailing to the storyline and that's what keeps one going.

The story is about Radhe and Tamanna who are united by music but torn by legacy. What happens next? Will music keep them united or will legacy play destiny and drift them apart forever?

Produced and created by Amritpal Singh Bindra and directed by Anand Tiwari, the all-new Amazon Original Series follows the love story of two young performers from very different musical backgrounds. Watch it now as Bandish Bandit is out!