The newest track from Bandish Bandits titled Sajna Bin is out!

sajan bin is composed by Shankar Ehsaan Loy and voiced by Shivam Mahadevan and Jonita Gandhi. The lyrics for the song are written by Divyanshu Malhotra. 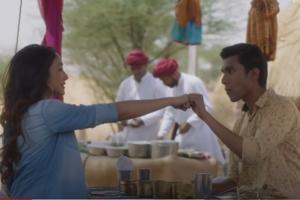 Sajan bin is composed by Shankar Ehsaan Loy and voiced by Shivam Mahadevan and Jonita Gandhi. The lyrics for the song are written by Divyanshu Malhotra.

Speaking of Bandish Bandits Shankar Ehsaan Loy said, “Bandish Bandits is special for us in more ways than one. Not only does it mark our digital debut, the soundtrack also allowed us to experiment with contrasting musical genres ranging from Rajasthani folk and Indian Classical to Pop and combine them to create something wholly unique. We’ve worked with artists from across the country for Bandish Bandits and we’re confident that the soundtrack has something for everyone. It’s truly exciting and we hope the audience enjoys it as much as we enjoyed making it.”

Check out the jukebox here:

Bandish Bandits follows the story of Radhe and Tamanna. Radhe is a singing prodigy determined to follow in the classical footsteps of his grandfather. Tamanna is a rising pop sensation desperate to become India's first international pop star. Radhe's world is turned upside down when he falls in love with Tamanna. Torn between helping her achieve superstardom and staying true to his own music and his family’s legacy, will he succeed in juggling both at the risk of losing everything he has?

Next Story : Ameesha Patel and Prateik Babbar to start shooting in UAE