Night out with the bats

They are not blind. Don't brand them as bad omens. Vampire bats are not found in India. We bust these and other myths as BNHS mammalogist Dr Bandana Aul takes us on a delightful fact trail of these mammals, especially since now is the ideal time to spot a few in Mumbai 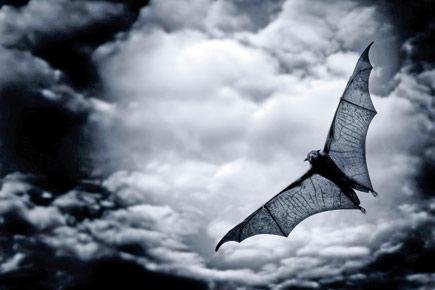 
Believe it or not but Mumbai is actually a great place to spot bats! Before we get into how to spot these mammals, here's a backgrounder on this species. 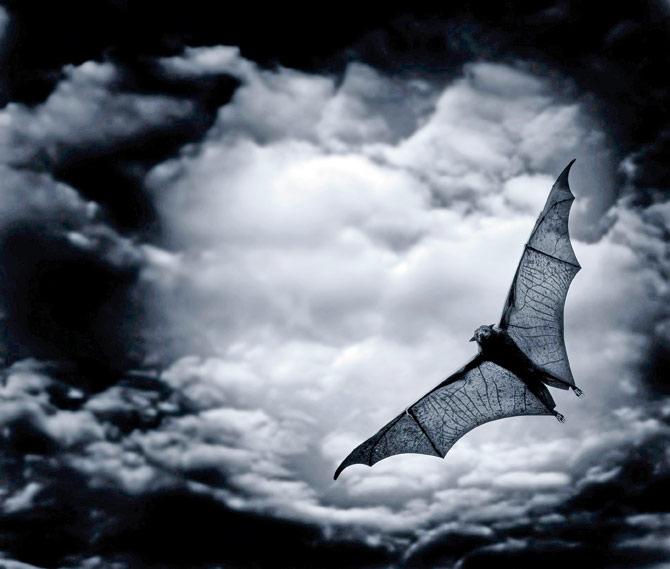 Bats are found in tropical, temperate and desert areas throughout the world except in extreme desert and artic regions. Bats are the second most diverse mammalian order after rodents in India, with approximately 120 species. Here's a list:

1. Old World Fruit Bats (Megachiroptera):
These are the fruit eating species and seen around human settlements. The most common one is the Indian Flying Fox commonly seen on Ficus trees in large aggregations during the day. A roost close to the Hornbill House, in the premises of the CSMVS, can be seen easily during the day. These form the group of Mega-bats. They have large eyes, small ears, large bodies, and have a dog/ fox-like face and so are frequently referred to as Flying Foxes. They either eat fruit or drink nectar from flowers. They have been misunderstood to be farmer's pests; on the contrary, they are pollinators of economically important species in forests, including cash crops such as mango, cashew, balsa, agave, and bananas. They are roost-loyal, and rarely change roosts unless disturbed. 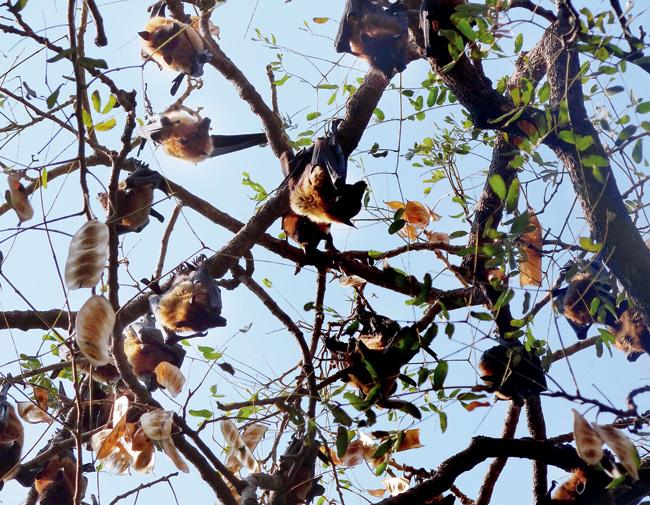 3. Sheath Tailed bats (Emballonuridae):
These are the high canopy fliers and roost in the tiniest of crevices. BNHS has spotted T Melanopogon in Kanheri Caves. It also roosts in abandoned buildings and forts. 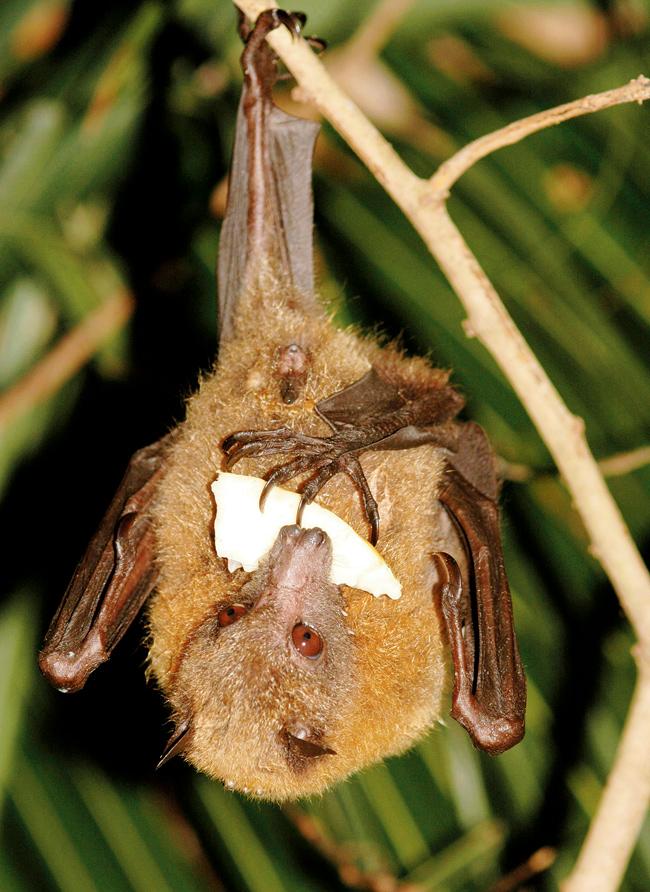 4. False Vampire bats (Megadermatidae):
These are carnivourous bats and feed on frogs, snakes, lizards and bigger insects. They stay in groups of 10-15 and can roost in caves, and tree hollows. They have been recorded by the BNHS on Elephanta Island.

5. Horse Shoe bats (Rhinolophidae):
These are ordinarily forest dwelling species and have not been seen in areas where disturbance is more prominent. They have not been recorded in Mumbai presently. 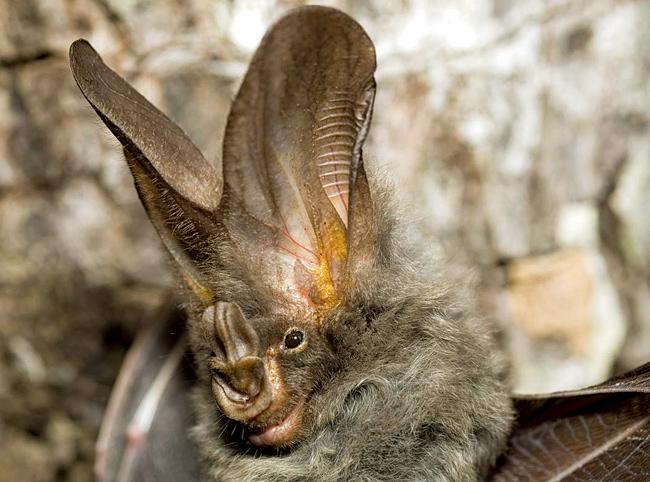 6. Leaf Nosed bats (Hipposideridae):
They are commonly seen near habitation and appear to adapt to surroundings, and can stay in abandoned buildings, caves and forts. They seem to adapt to the disturbance around them. 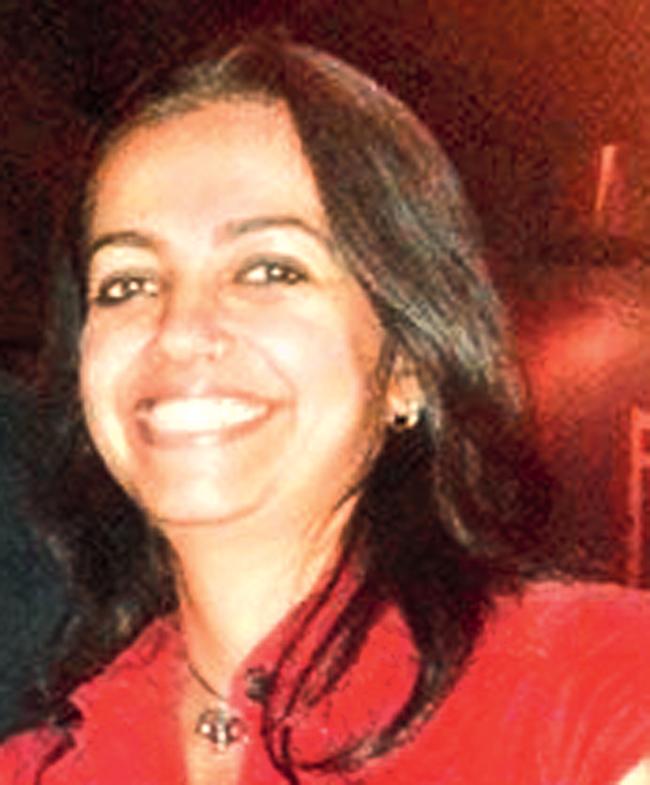 7. Evening Bats (Vespertoinidae):
These are large in numbers and are seen to be the first to come out for feeding in the evenings. They stay in buildings, abandoned areas and caves. Small in size, they are swift in flight.This list of species includes those recorded all over Maharashtra, and not only Mumbai. Five species were listed from Kanheri and Elephanta with records dating to the 1980s but lack of monitoring and follow-up studies have created a gap in species patterns. This coupled with developmental activities has changed the previous roosts and so they could not record any species from the Kanheri Caves. They recorded three species in Elephanta Caves with one of the species vacating the cave in the dry season. Overall, BNHS has been able to record the following species in Mumbai through field and direct observation:

Next Story : Ideas for Mumbai's spaces