Walk amongst the Stars at Mumbai's Filmcity 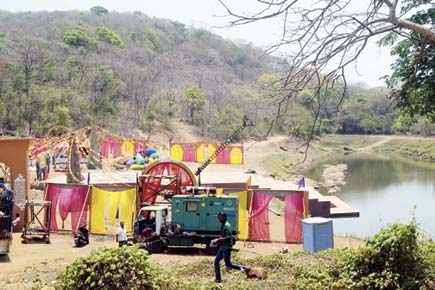 It is 11 am on a blazing hot morning. Undeterred by the searing heat though, there is a crowd of anxious people waiting to go on the Filmcity tour. A mix of senior citizens, children and youth are amongst the 25-odd people. By 11:15 am, the bus is ready and as per the bookings people are allowed entry. 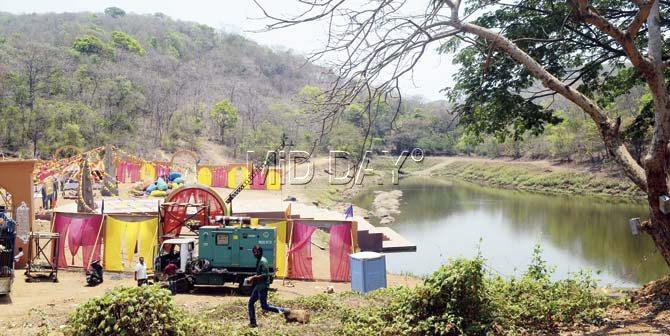 The air-conditioned bus with broad windows is perfect for a tour of Dadasaheb Phalke Chitranagari. Prior to the day of the tour, frequent reminder SMSes are sent if you have done online booking. 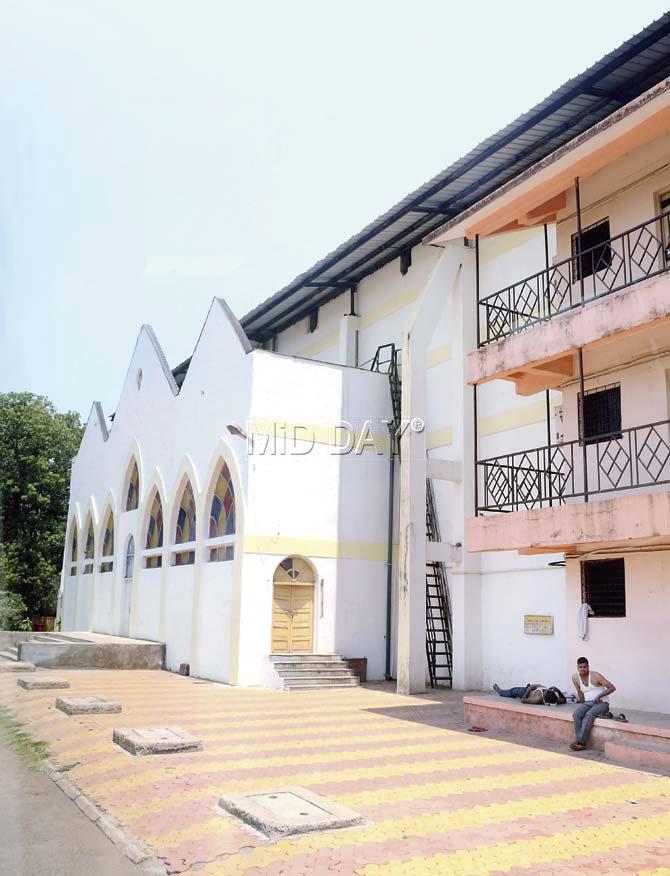 This one set houses three iconic structures a church, chawl and court used in many films

Through the gates
A bottle of water, a packet of chips and an identity card that reads ‘tourist’ is given to all onboard the bus who are instructed to wear it at all times. A video of the History of Bollywood is shown as the tour commences. 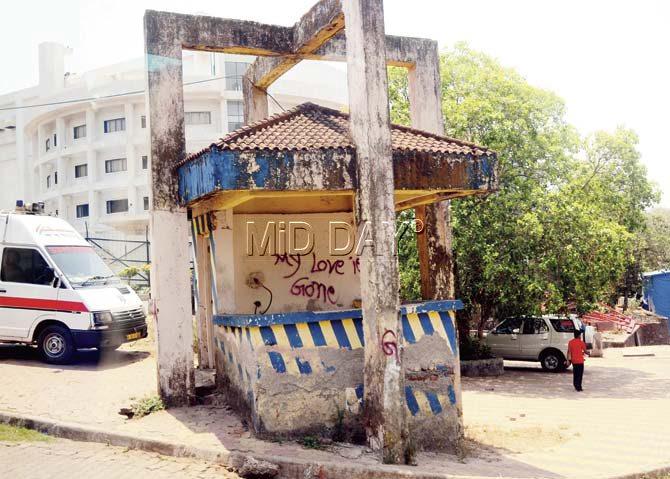 Guide Aram Sandesh takes the mike as he talks about how the video will aid him in explaining the history and geography of Filmcity. As the bus slowly begins to move, excited tourists are all ears. Sandesh informs, “The world has been made to come alive at Filmcity with sets of Thailand, Goa and Gujarat all made within the 520 acres of Goregaon. 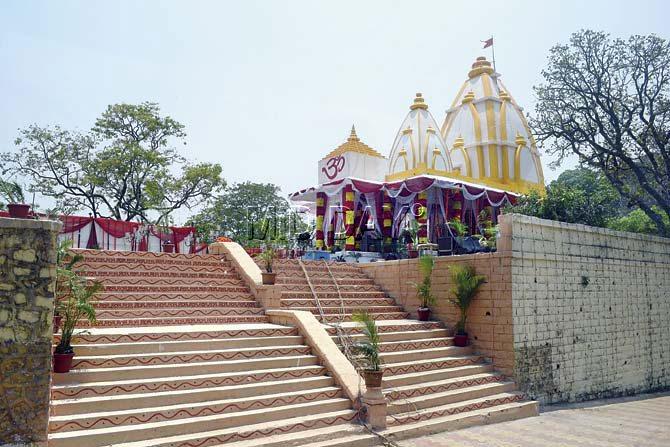 The first film to be made in Filmcity was Barsat Ki Ek Raat.” As he explains this, a clip from the film is played to help remind everyone of the film. The first stop the bus makes is at Sai Maidan which is named after the film Sai Baba that was shot there. 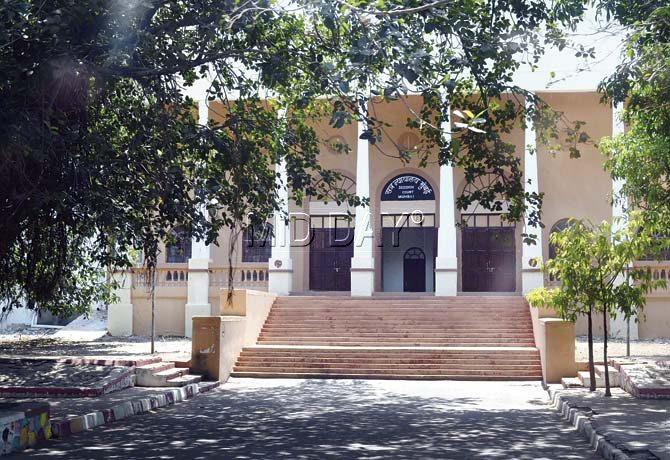 The seat of justice, this structure has been high court or Supreme Court in many films and serials

Welcome Maidan comes next, where the film Welcome was shot. “Mathura for Happy New Year, Roy and Madhubala was created on the ground,” says Sandesh. He goes on to say, “For a film to get clearance from the censor board at least some part of it has to compulsorily be shot at Filmcity.” 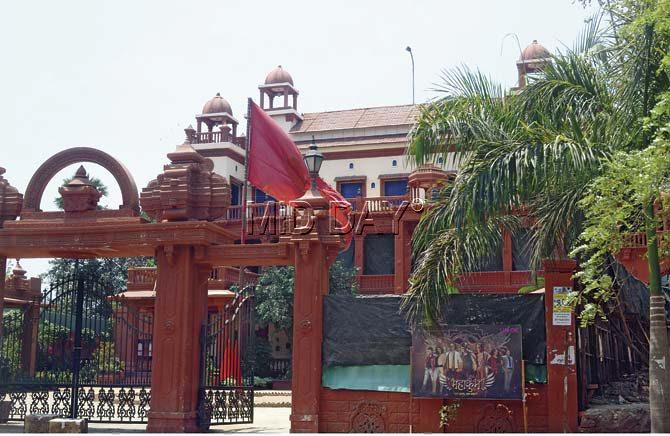 A television serial set at Filmcity 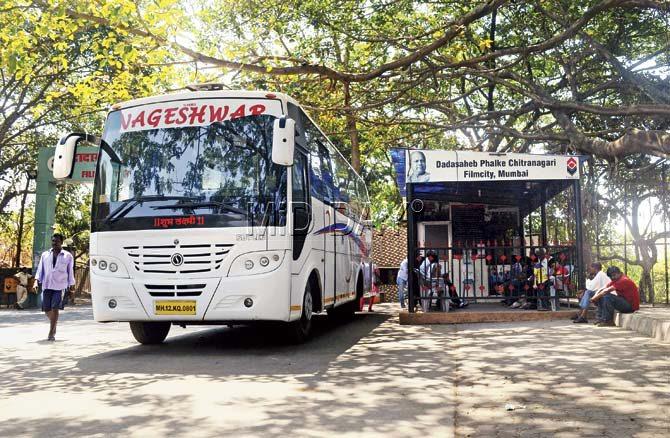 From there the bus proceeds to Josh Maidan where the film Josh was shot and Goa was recreated. Sandesh says, “Art directors are masterminds who design the world in Plaster of Paris (POP). The camera does the trickery of making the unreal seem real.” 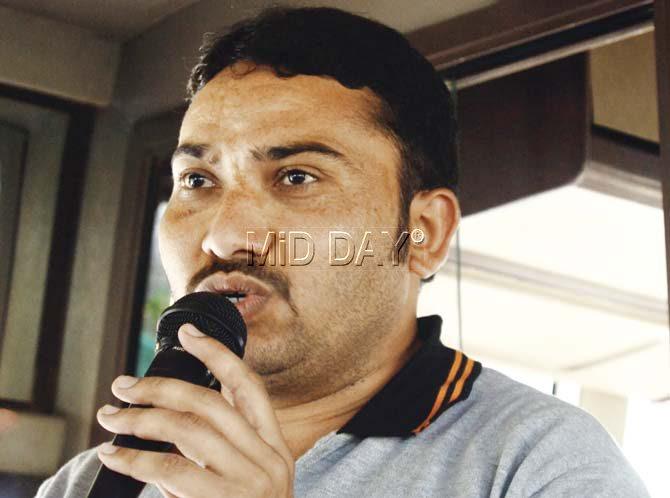 Whole new world
The bus slowly moves to Joker Maidan, the Akshay Kumar-starrer was filmed here. Besides that Shah Rukh Khan’s upcoming film Raees was also shot there. Opposite that is Abucha gaon which was the set of BR Chopra’s Mahabharat. The location also is home to most village sets in Bollywood and regional films.

Sandesh says, “As soon as the shooting of a film or serial is over, the set has to be broken down. If that is not done, the production house has to pay a huge sum of money to the government. Most sets are made of POP with colours used to make them attractive.

Next, the bus passes the set of Saraswatichandra which is currently being used as the set of Mahakumbh. Opposite this magnificent set is the Udaan set where child artiste Spandan Chaturvedi was having her make-up done. She waved to the bus, much to the excitement of those who follow the show closely.

A lady was heard saying, “At least we saw one celebrity. Now a days, television actors are the real stars. They don’t have airs which is refreshing.” The bus next goes past Kaalia Maidan named after the Amitabh Bachchan film that was shot there. The haveli for Ragini MMS was also made here.

Breathtaking buildings
“Subash Ghai’s Mukta Arts building is the set of many banks, hospitals and hotels,” Sandesh says as the bus passes by. Next the bus passes the set of Yeh Rishta Kya Kehlata Hai. Serial faithfuls remark, “We thought the serial was shot in Udaipur.

So this is where Singhania Sadan is.” The bus next, passes a court which guide Aram Sandesh says is a permanent structure, “It is where justice is denied or given in serials and films.” Adjoining the court set is a church which was used as the set in Amar, Akbar, Anthony and in Ajab Prem Ki Gajab Kahani.

Adjoining the church is a chawl which was the set of Hera Pheri. There is great excitement at passing Studio 7 set of Comedy Nights with Kapil. Anxious fans hope to catch a glimpse of Kapil Sharma, but shooting wasn’t on, sadly.

The bus passes a tank which Sandesh points to and says, “Sholay’s famous suicide tank scene was shot here. As was Bobby Doel’s reenactment of it in Yamla, Pagla, Deewana. Though it looks very small, the cinematography (camera work) made it look high, big and like a real suicide spot.”

BR Chopra’s house, where he stayed when Mahabharat was made was used as the Bhootnath house; Sandesh says as the bus pass by it. Near that are steps where a song from Ready was shot. “The steps look dilapidated, but some painting made them look like a foreign location in the song,” explains Sandesh.

Super security
The bus stops and the tourists get down and walk to a lake where a set of a fair has been laid on its banks. “R... Rajkumar, Mission Kashmir, Rishton ka Mela were shot here on the banks. The lake was used to shoot the iconic Devdas scene where Shah Rukh Khan empties his alcohol bottle in the water and tries to drown.

The trees and forests in Filmcity were used in dacoit films for action sequences,” explains Sandesh. Despite the heat, tourists were excited about discovering Bollywood as they visited the sets. The bus passes a check post which was the set for Force, Gangajal and used as a location marker and road forking set for many films and serials.

The bus heads to a scenic location from where the Powai Lake area can be seen. No Entry, Ek Tha Tiger and Hum Dil De Chuke Sanam were shot here. The area also has a helipad that has been used in many films and serials. The bus passes Echo Point which looks like a place out of a hill station and has been used as the location of many films.

“The iconic song Disco Bhangda was shot here,” Sandesh tells us. The bus next passes a temple, which has been the set of many serials and films. Sandesh says, “The temple has no fixed deity and every day the god or goddess keeps changing here. Jagga Jassos, Deewar, Hasee Toh Phasee were shot here.”

The bus passes the house used in Bhagbhan which was also the set of the school in Singham. The adjoining garden was used to shoot scenes in Sauten, Jab We Met and many serials. The bus next goes past Khandala Bridge where action sequences of films and serials are shot from Machhis to CID to Savdhaan India to Rohit Shetty films.

More sets ahead
Next we pass the Campus where Krantiveer was shot. The space has been used as the sets of universities, schools and colleges as well as airports. “All Filmcity administration is done from here,” says Sandesh.

The bus next makes a stop near Gokuldham Society the set of Tarak Mehta ka Ooltha Chasma where shooting was on behind a wall. Excited fans were trying to get a look at their favourite stars from the restaurant where the bus stopped for a break. There were toilets here and also people could have some refreshments.

Post the break, the tour ends with the bus coming out of the Filmcity gates back to the spot outside from where it started. The video also ends as tourists are asked to return their id cards and alight from the bus. A crowd of excited people ready for the next tour batch wait expectantly.

The tour is very informative and offers a close view at Filmcity and the world there. Also, the secrets of film and television are unravelled. The guide speaks in filmi language saying dialogues from a number of films and gives a lot of in-depth information.

However, the tour website says the tour is in English and Hindi, but the guide speaks only in Hindi with no English used at all. On the whole, the Filmcity tour is a good experience for fans of Hindi television and film. It offers a chance to meet the stars and see the world of fiction and fantasy from close quarters.

Next Story : Landscapes through the lens