When the Louvre Pyramid in Paris was 'transformed'

French artist and photographer JR covered the Louvre Pyramid in Paris, France with a giant photograph of the Louvre Museum on Thursday 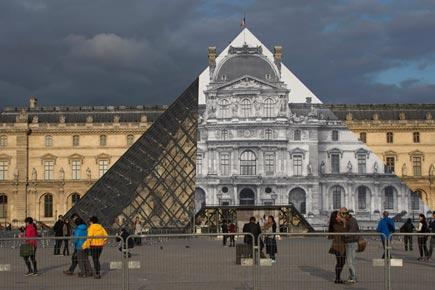 Louvre Pyramid covered with a giant photograph of the museum by French artist and photographer JR in Paris, France


French artist and photographer JR covered the Louvre Pyramid in Paris, France with a giant photograph of the Louvre Museum on Thursday. 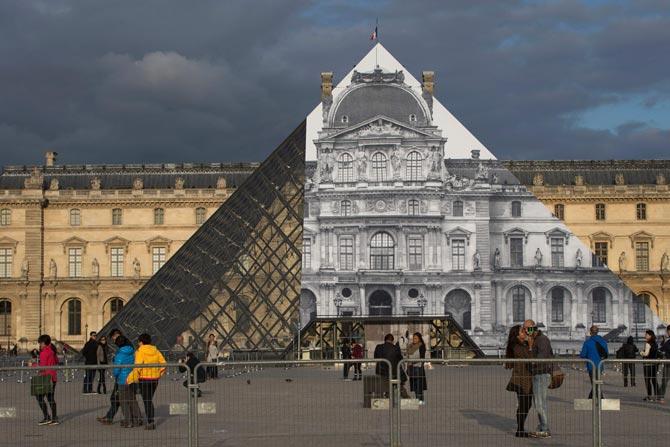 Invited by the Louvre, the artist intends to tranform one of the Louvre’s symbols, the Pyramid, 'with a surprising anamorphic image', according to museum sources. 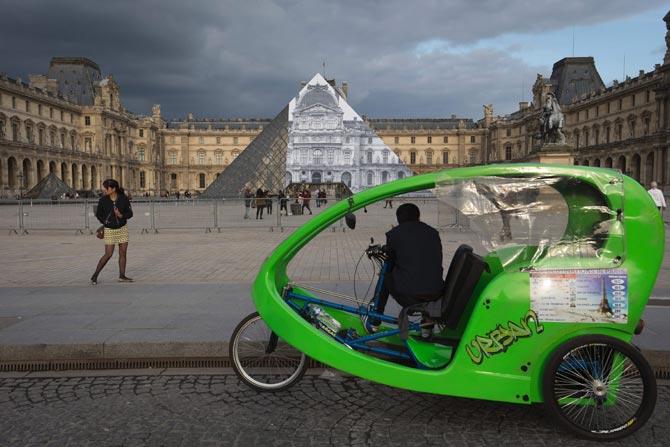 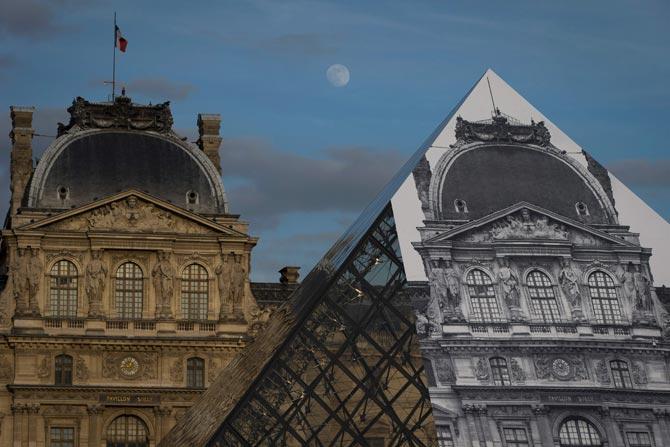 The artistic rendition became quite a sight attracting several onlookers. Street vendors, tourists, visitors at the Louvre museum, passersby and many others gathered at the spot to view it.

Completed in 1989, the pyramid serves as the main entrance to the Louvre Museum and has become a landmark of the city of Paris.

The Louvre Pyramid was commissioned by then President of France, François Mitterrand, in 1984. Architect I. M. Pei, who the Miho Museum in Japan, the MasterCard Corporate Office Building in Purchase, New York, the Rock and Roll Hall of Fame Museum in Cleveland, Place Ville Marie in Montreal, and the National Gallery of Art (East Building) in Washington, D.C. among others is responsible for the pyramid's design. 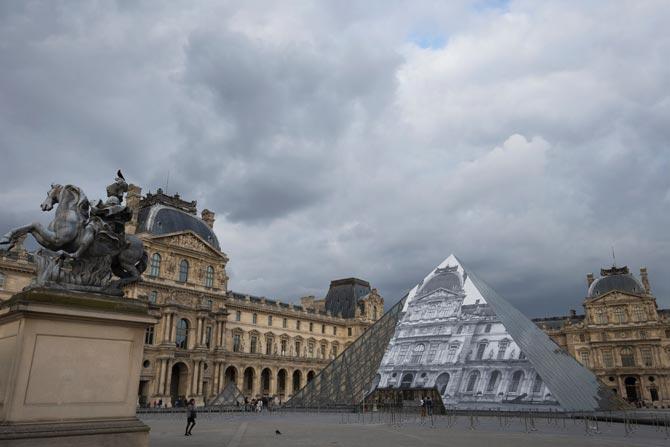 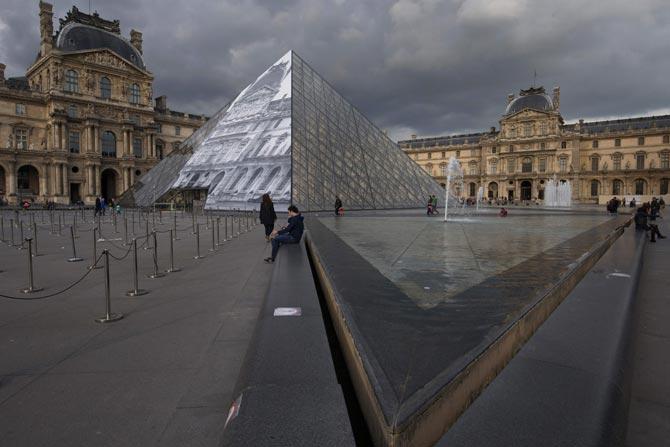 The Louvre Pyramid's construction created controversy with several naysayers criticizing the aesthetics said it was "sacrilegious" to tamper with the Louvre's majestic old French Renaissance architecture, and called the pyramid an anachronistic intrusion of an Egyptian death symbolism in the middle of Paris. But despite this, many consider the juxtaposition of contrasting architectural styles a successful merger of the old and the new, and applaud the transformation of the Louvre's main courtyard from a dismal parking lot to a grand public gathering place.

There is an urban legend that the glass panes in the Louvre Pyramid number exactly 666, "the number of the beast", often associated with the Devil.

A skylight was constructed in the Carrousel du Louvre shopping mall in front of the Louvre Museum called the La Pyramide Inversée (The Inverted Pyramid). It looks like an upside-down and smaller version of the Louvre Pyramid. 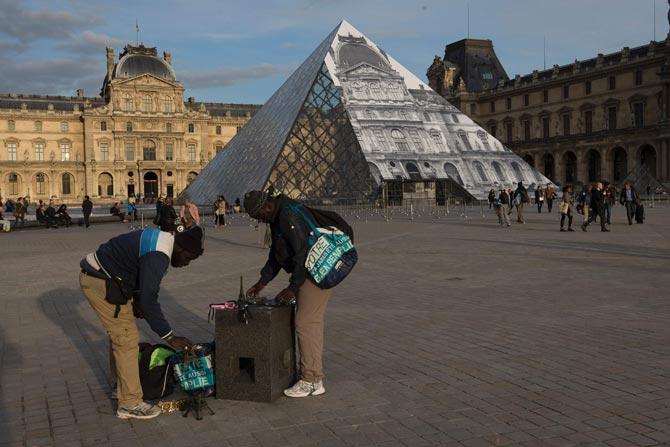 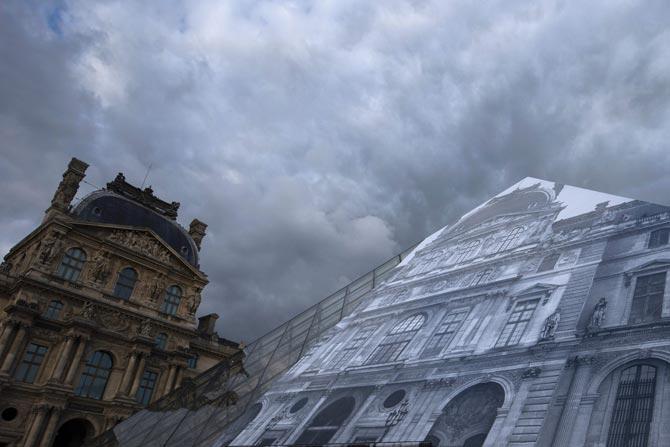 Between 2014 and 2017, the layout of the foyer area in the Cour Napoleon beneath the glass pyramid is undergoing a thorough redesign, including better access to the pyramid and the Passage Richelieu. This is due to the Louvre's attendance, which has doubled since 2014.

The Louvre Pyramid's structure, which was constructed entirely with glass segments, reaches a height of 21.6 metres (71 ft). The pyramid's square base has sides of 34 metres (112 ft) and a base surface area of 1,000 square metres (11,000 sq ft) and consists of 603 rhombus-shaped and 70 triangular glass segments. 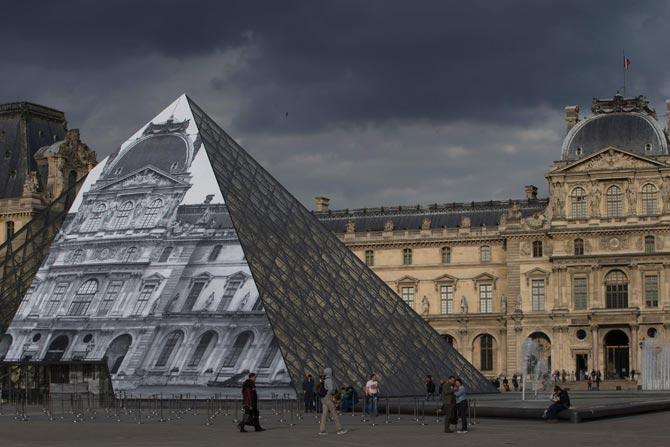 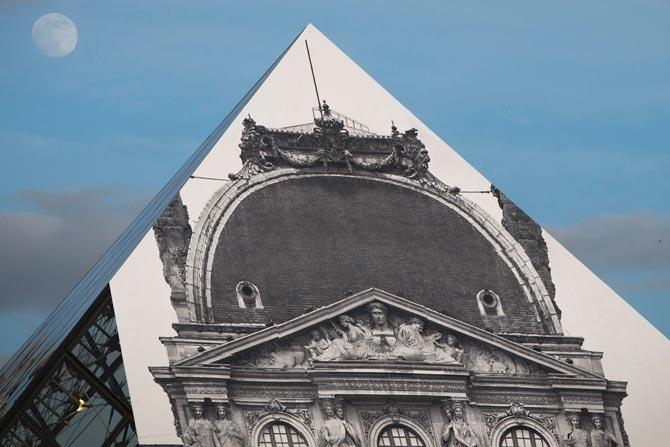 The Louvre Pyramid and the underground lobby beneath it were created because of a series of problems with the Louvre's original main entrance, which could no longer handle the enormous number of visitors on a daily basis. Visitors entering through the pyramid descend into the spacious lobby then re-ascend into the main Louvre buildings.

The Museum of Science and Industry in Chicago, the Dolphin Centre in London and other museums have duplicated this design concept of the Louvre Pyramid.

Next Story : Five iconic ad campaigns that scripted the 'era of change' in India