Having given the top-notch mantra of #Thinking Rich, he proved his skills and capabilities by asking people to get financially educated and not only financially stable. 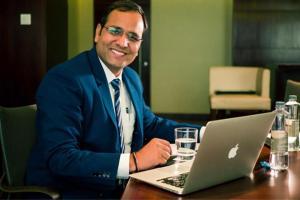 By giving the top-notch mantra of #Thinking Rich, the ace motivational speaker Bhupendra Singh Rathore has proved to be one of the finest speakers the country has ever seen. An individual with dynamic yet diverse thoughts, he is a great influential speaker and one who mediates through thoughts and not through words! It is his calibre and capacity to influence people in the right direction that have brought him so much attention and success. His efforts and eminent initiatives to drive the citizens in the right direction have not only brought him recognition but loads of experience that make him the best among all!

Having given the top-notch mantra of #Thinking Rich, he proved his skills and capabilities by asking people to get financially educated and not only financially stable. His words and thoughts have given the power to the hopeless and he has helped over 1000 companies and 1.25 million people. In order to make his country rich, he has been going vocal with the same thought and aspires to influence more people in the time to come. A very humble and respectable individual, he connects with people and possesses the power to bring a positive change in their mind-sets. It is because of his prowess and perception that he has followed his dreams and pursued his passion.

A person of high interests and polite nature, he has been persistently working towards his goal. The only motivational speaker to represent India at the United Nations, Bhupendra Singh Rathore (BSR) has a renowned portfolio. His speaking skills have won him hearts and those who listen to him aspire to become like him. With his name attached to many national initiatives and international events, he is repeatedly winning the stage by presenting the best of his thoughts and ideas. A creative person by nature, he has not only to innovate perceptions for the betterment of the country but also has the energy to implement them at the ground level. It is this enthusiasm that makes him the best among his contemporaries.

Due to his unstoppable achievements, he also runs a very successful virtual conference in the pandemic times. This not only provides him a way to reach the youth and workforce of the nation but also offers his leisure time to those in desperate need. Recognized and renowned for his overall work, his unbeatable strategies and tactics have paved the way for people to become financially enlightened and enriched. In light of this statement, Bhupendra Singh Rathore (BSR) not only emphasizes on becoming rich but also pays equal importance to #Thinking Rich! This helps an individual to sustain his/ her financial stability and in turn, aim for long-term investments. Willing to help many more people in the long run, his achievements alone attract 1000s and inspire them to follow in his footsteps. By providing real-life examples and instances, he offers substantial learning and prosperity of the country.

Perhaps a responsible citizen of the country, he is doing his ultimate bit by educating several in one go!