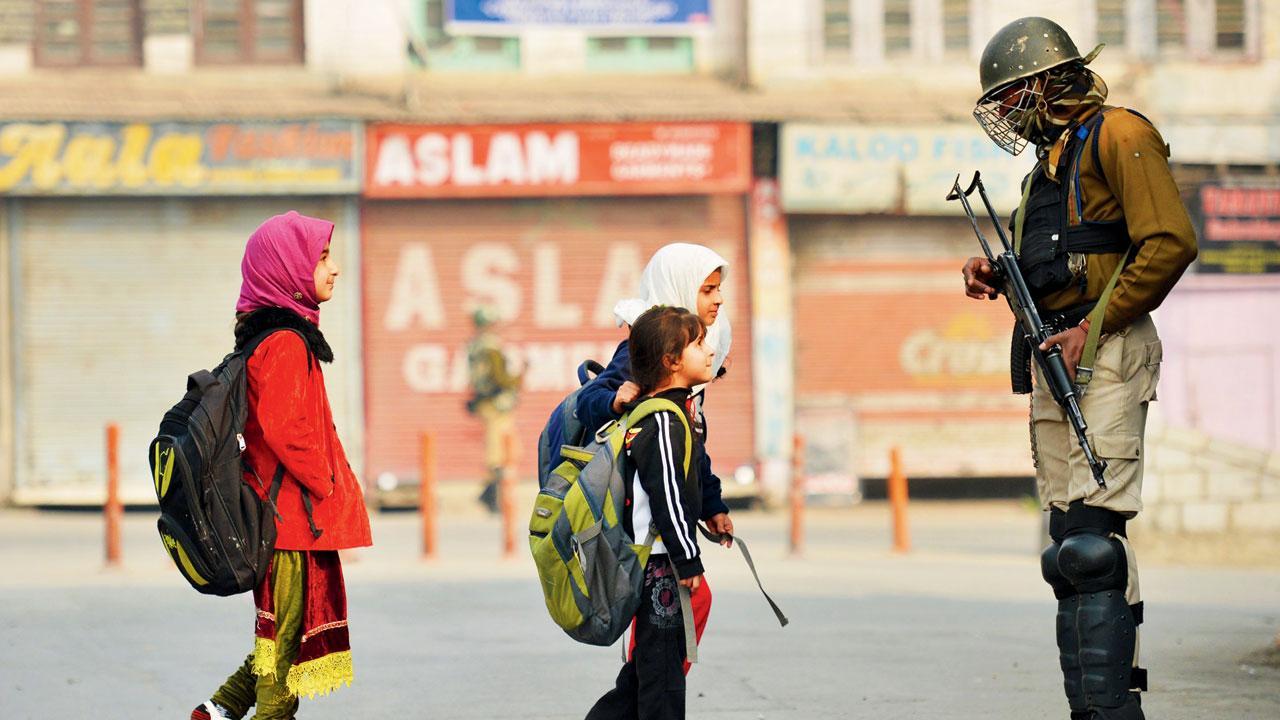 The book explores how children navigate surveillance and militancy in the state, while trying to achieve their dreams. Pics/AFP


In 1984, Deepa Agarwal first visited Kashmir, a place that was then more synonymous with holidays and honeymoons than with human rights violations. Her second visit was a little over two decades later to a translation camp - a decision that was met with hesitation by her family. “You could see the amount of security at the airport. It was depressing. But I got an opportunity to talk with locals about how their lives had been affected by the militancy, army and continuous conflict,” she recalls. Come 2021, and the Delhi-based writer, who has over 50 published books to her credit, has released Kashmir! Kashmir! (Scholastic India).

The title is not totally inspired by her travels to the state but rather is one that factors in the hopes, dreams and courage displayed by Kashmiri children, now trapped in a place ridden with conflict and bloodshed, in nine, vividly detailed stories. Agarwal acknowledges that she is very much an outsider, yet asserts that the role of an author also implies being an observer and a commentator. And as a grandparent, she couldn’t ignore the plight of these kids.

This is a children’s book with unabashedly political underpinnings. When asked about how she tackled the depth of these narratives for young readers, Agarwal says that it was important to dwell on both the aspirations of Kashmiri children, and the fact that these aspirations are sheltered in a turbulent state: “They are questioning, ‘Why is this happening to us?’ As an author, I’m trying to get under the skin of these characters. I also visited Srinagar for the literature festival, Bookaroo, which was held at a school. The children were so enthusiastic. I remember speaking to a girl who was in the 11th grade who revealed her plans to become a doctor; I’ve added this bit to Humra’s character in the story titled Lockdown.”

The idea for the book came about in January last year at the World Book Fair in Delhi when Agarwal struck a conversation with Scholastic India’s publisher Shantanu Duttagupta. She was due to go to Srinagar for a school visit, too, but the plan didn’t materialise as the lockdown commenced. So, Agarwal began writing during the first phase of the lockdown; it all started with making outlines for each story. “It was difficult because not only did I have the lockdown weighing on me but also a deadline to complete the book,” she shares.

As part of her research process, Agarwal read a lot of blogs by Kashmiris, and books, including titles by Chandrakanta, Mirza Waheed, Basharat Peer and Sanchit Gupta. Some fictional narratives stemmed from news reports that she says, “stick in your head”; for instance, the first story, Run, Zainab Run is based on an incident reported in October 2019, when two apple truck drivers were shot dead by militants.

In music, people commonly associate a major key with a happy sound, and a minor with a sad sound. Reading through 130-odd pages of this children’s book is like hearing a piece of music in both a major and minor key overlapping each other. Except that at the end of it all it hits you that the cost of this sadness is incalculable — it cannot, in any way, be compared to, that feeling of sadness a kid from Mumbai experiences about not being able to visit a playground because of the lockdown. And thus, the book begs the (rhetorical) question: how can we let this happen?

Next Story : How good is it?