Mumbai gets its first comic book store, and it endeavours to forever enchant fans and engage young readers in playful discovery 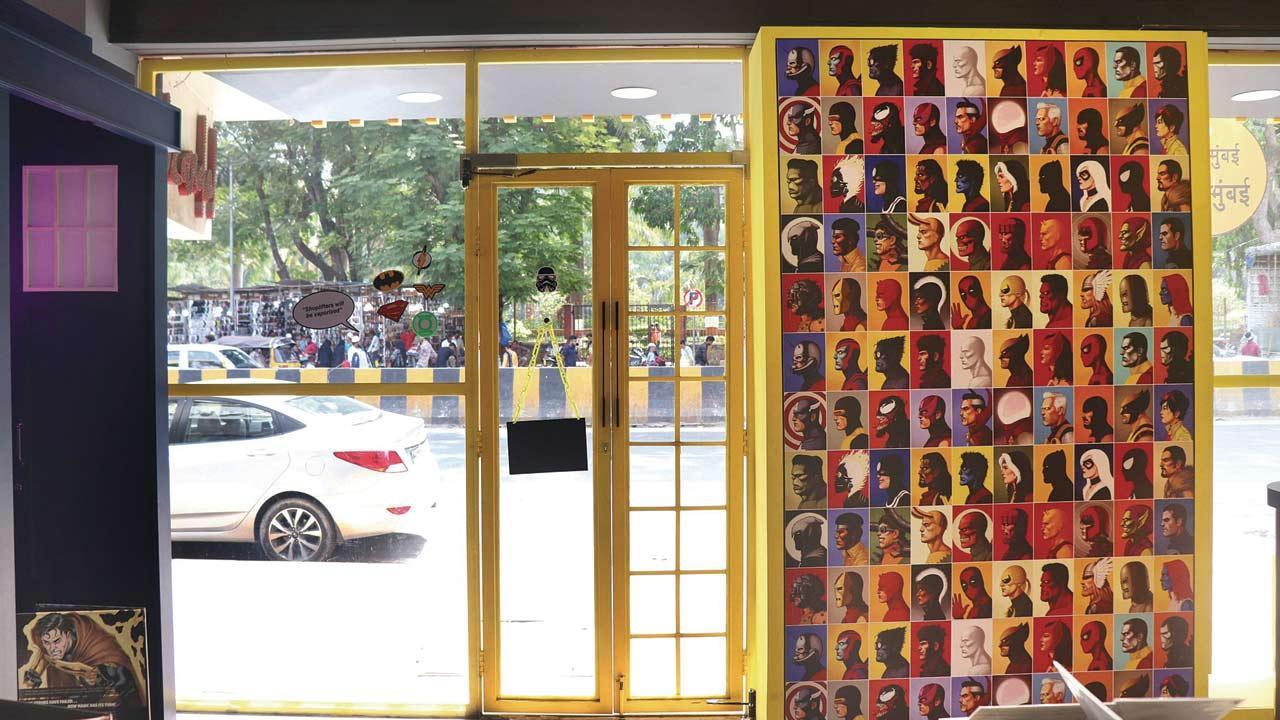 The superhero photo-op wall was a later addition to the interiors of the store that Sayed envisioned. Pics/Anurag Ahire, Sammohinee Ghosh


A bright yellow visual on a sweltering day isn’t the kind of escape this writer seeks. But this time, it was special. It was like answering a call from the funnies — those columns in English dailies she would devour as a child. While Captain Haddock, Peppermint Patty, Snoopy, Calvin and Dennis kept her company at the time, at some point ‘literary’ readings interjected the flow. This writer supposes the break resulted from the genre being considered ‘flippant’ by many. So, when the city got its first physical comic book store, it was important to rekindle that passion. 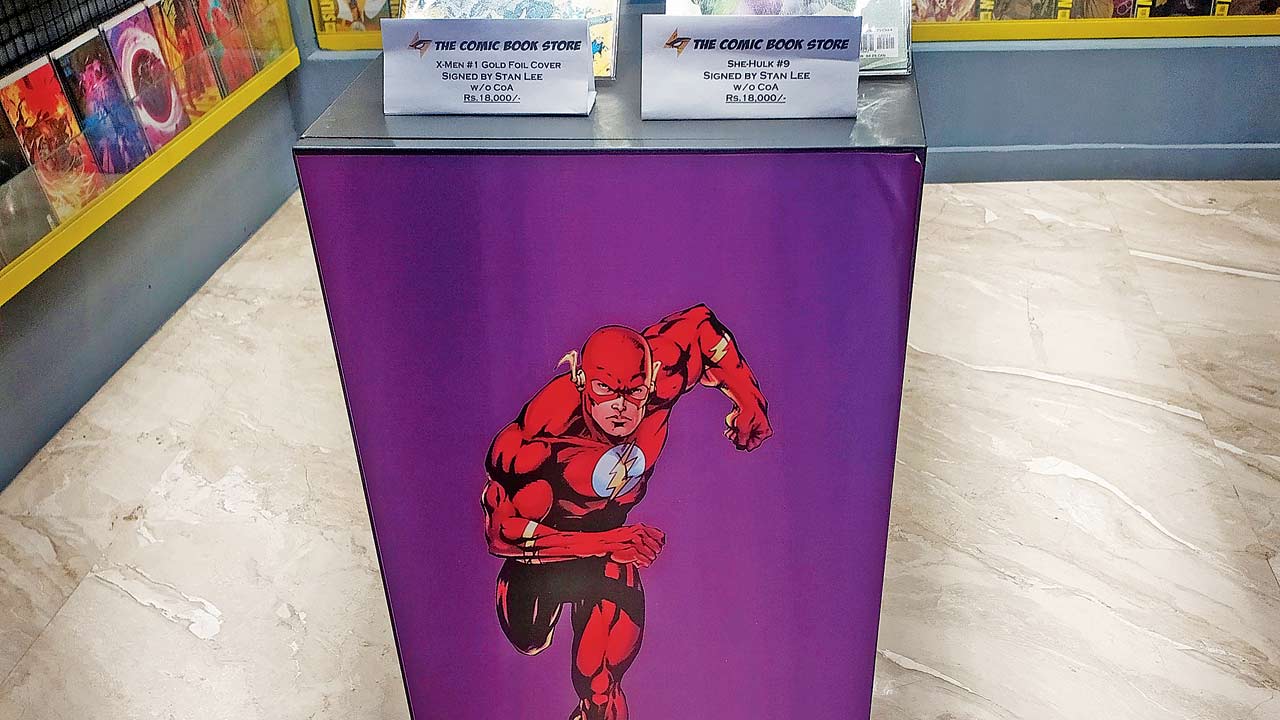 As stalls on Linking Road go about their daily business, a vibrant space titled The Comic Book Store stands out in yellow and green. When we walk in, it reminds us of a familiar place from the American television sitcom, The Big Bang Theory (TBBT). Fans might be teased to look for Stuart Bloom, who ran The Comic Center of Pasadena on the show. This store, a near exact reflection of that hangout, is Hamza Sayed’s baby. 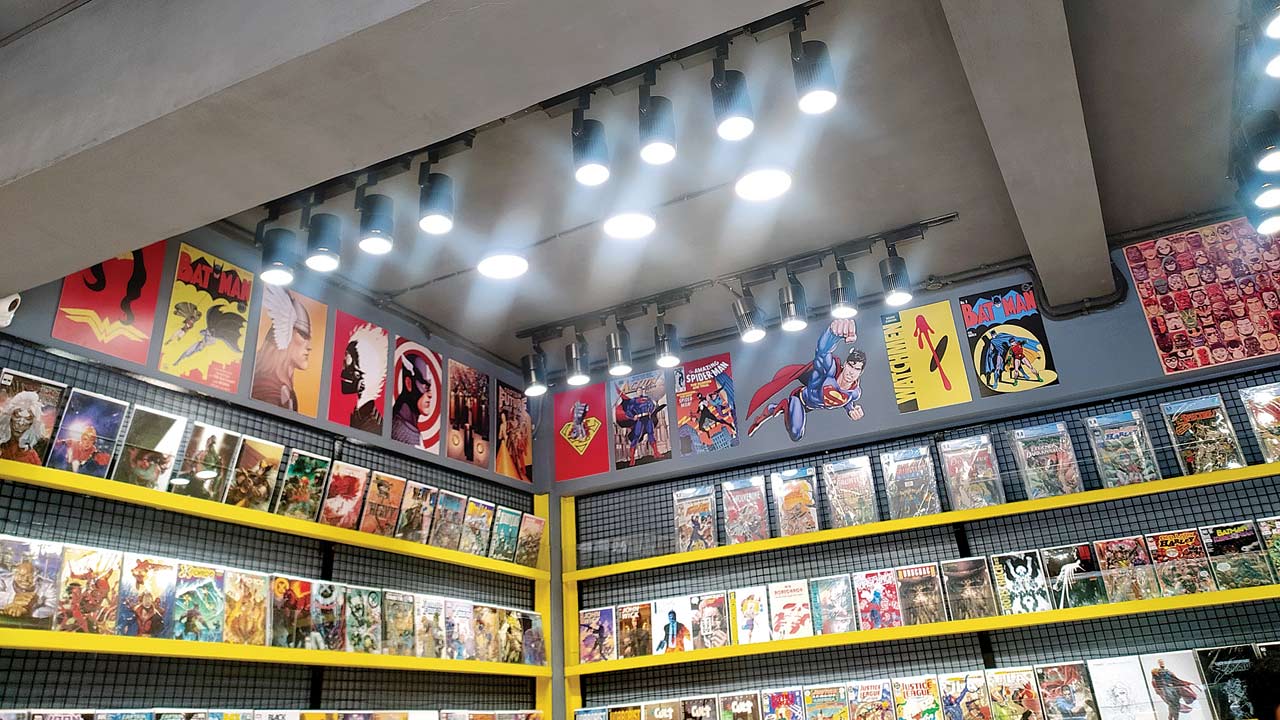 The Tardis escorts us in, a superhero photo-op wall guards our entry, grey shelves with wire-mesh backs await carefree browsing, and posters of our fictional heroes lord over us. For the 25-year-old, it was his dream to create a common point for fans to discuss and engage about their favourite titles. “This spot is perfect — it’s an upscale suburban neighbourhood that can be accessed from most parts of Mumbai. Since we are presenting popular culture to make it mainstream, the TBBT connection was involuntary,” he adds, pointing at a sticker that reads: “Shoplifters will be vaporized”. 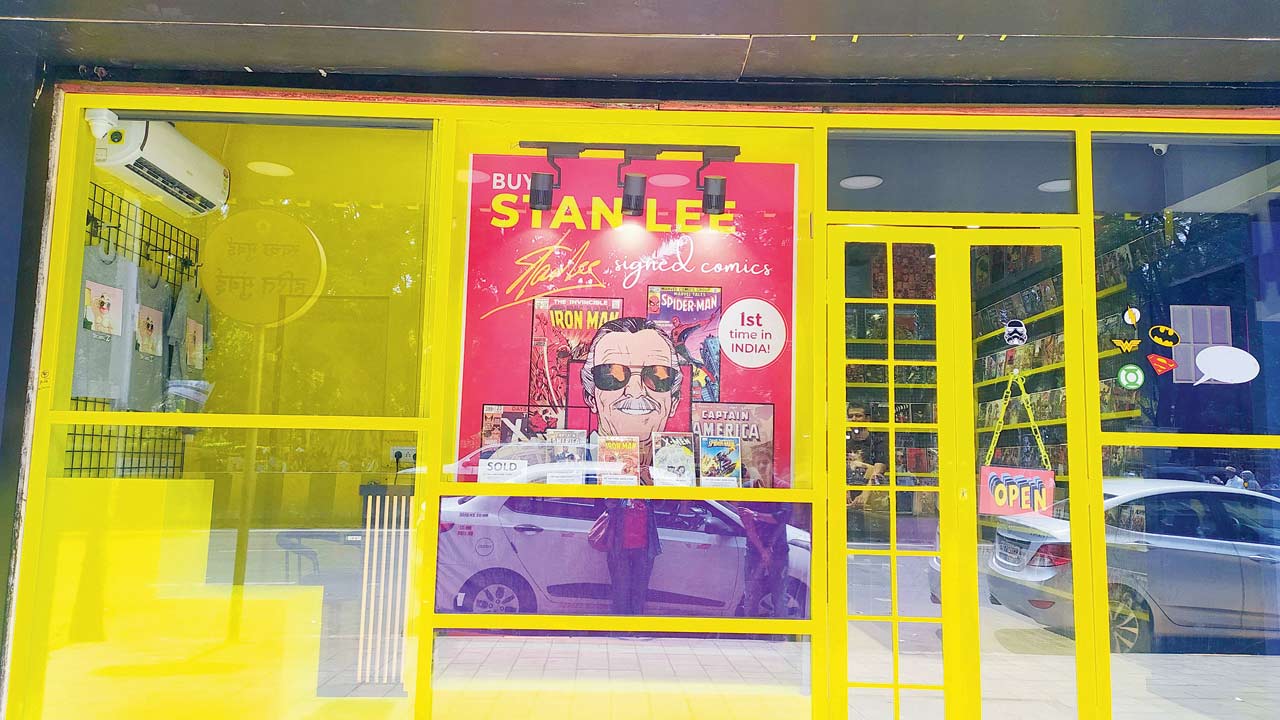 Stan Lee says hello to visitors from the window display

Sayed, who found comic-land as an alternative to being a loner, has a clear business model, “I didn’t find any sponsors; it was heartbreaking that investors weren’t aware of the culture and community these works wield. I funded my dream project with the clear idea of not mixing comics with graphic novels or merchandise. 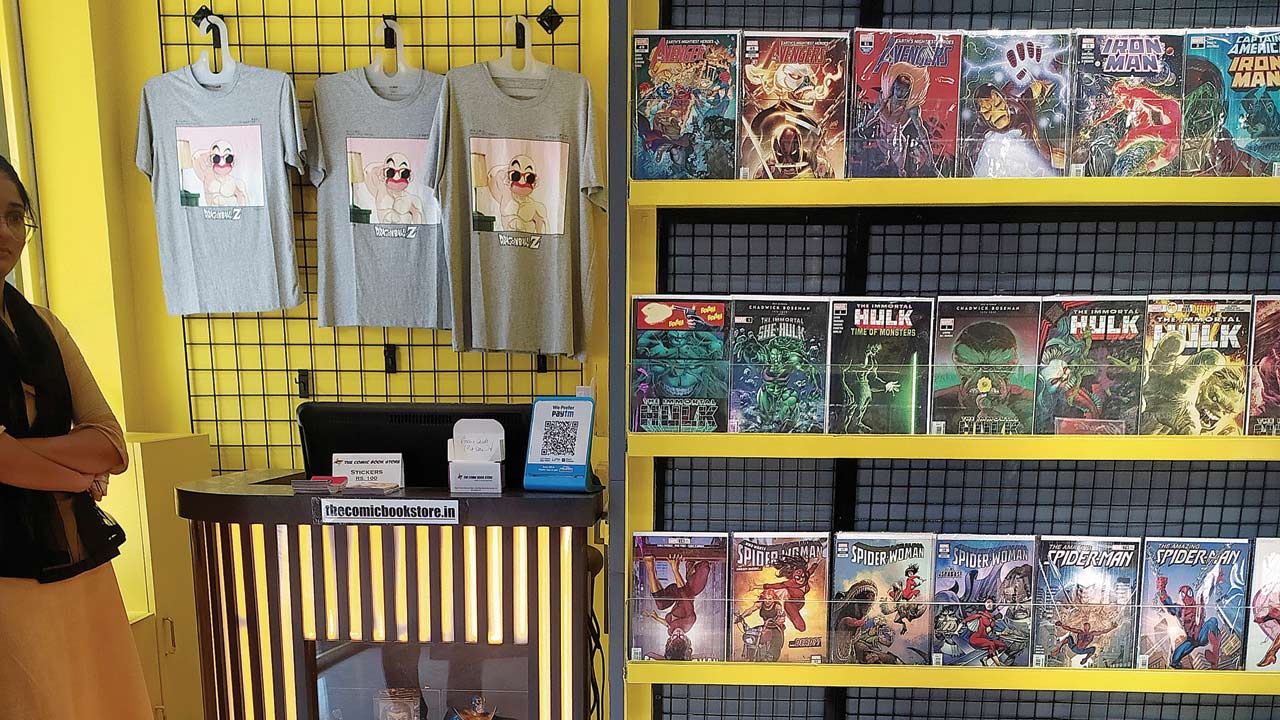 We stock some T-shirts and notable graphic narratives, but we are committed to single-issue comics.” We surmise it’s the mint-in-box feel that can be compromised with combined categories. Located near National College, students seem to have found a new adda at the store. Apart from teenagers and young adults who are target readers, older customers also visit; other curious folk stroll in to check out the shop’s appeal and click pictures in the Tardis. 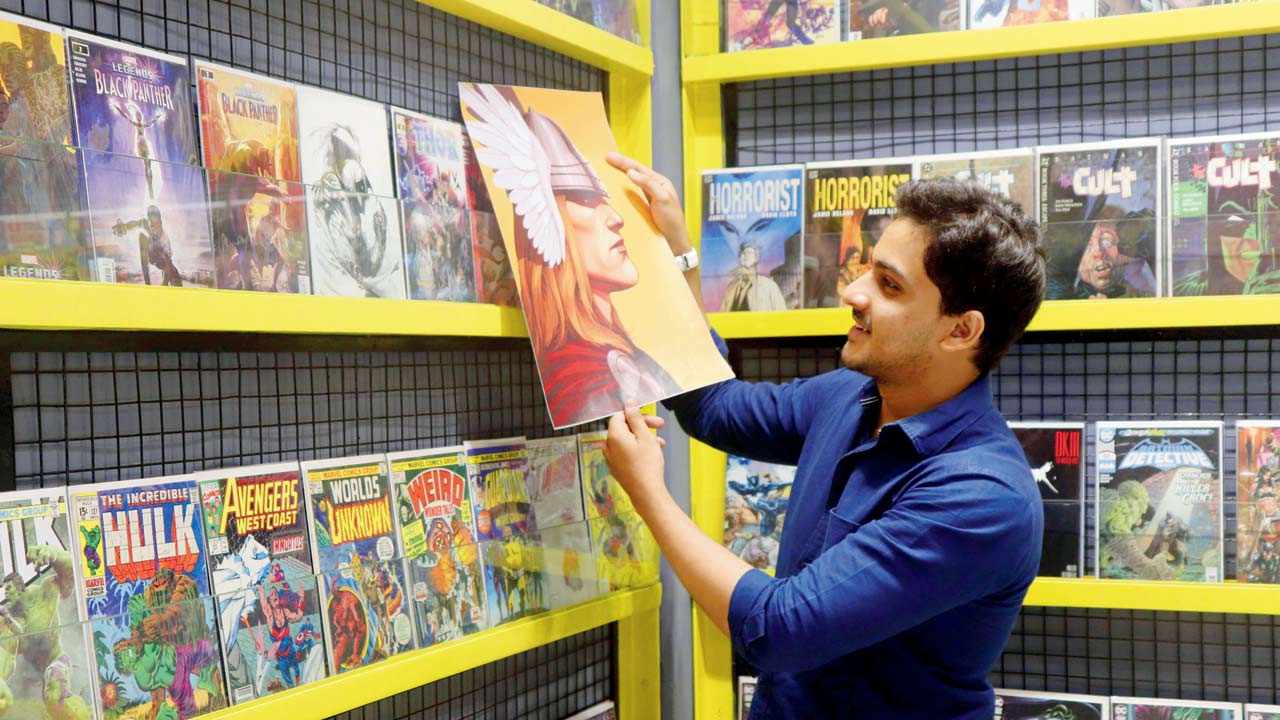 Hamza Sayed holds a Thor poster alongside a Thor #19 comic

Our eyes scan a 1936 volume of Tip-Top comics, before moving on to Batman Catwoman, Something Killing Children, Nightwing, Old Lady Harley, BRZRKR and Crimson. The stretch of our gaze ends with The Immortal Hulk, Iron Man and Avengers. Sayed sources his stock from distributors in the US. “Some vintage or novelty items have been acquired through comic stores and collectors around the world,” he reveals, adding that parents who accompany kids are often shocked at their prices. Comics are expensive, but the point of such an initiative is also to familiarise people with a multi-layered format of literature. As we walk out of this local comiket, we drool over the window display that reads: Buy Stan Lee-signed comics.

Time: Monday to Sunday, 11 am to 11 pm
At: Linking Road, Bandra West
Log on to @thecomicbookstore

>> It’s Cosplay time: Sayed tells us a Cosplay convention has been on his mind for long, but he’s waiting for the right time. “Whenever that happens, we will award the most fascinating costume players with prizes [within our range] such as a comic book of their choice,” he regales. 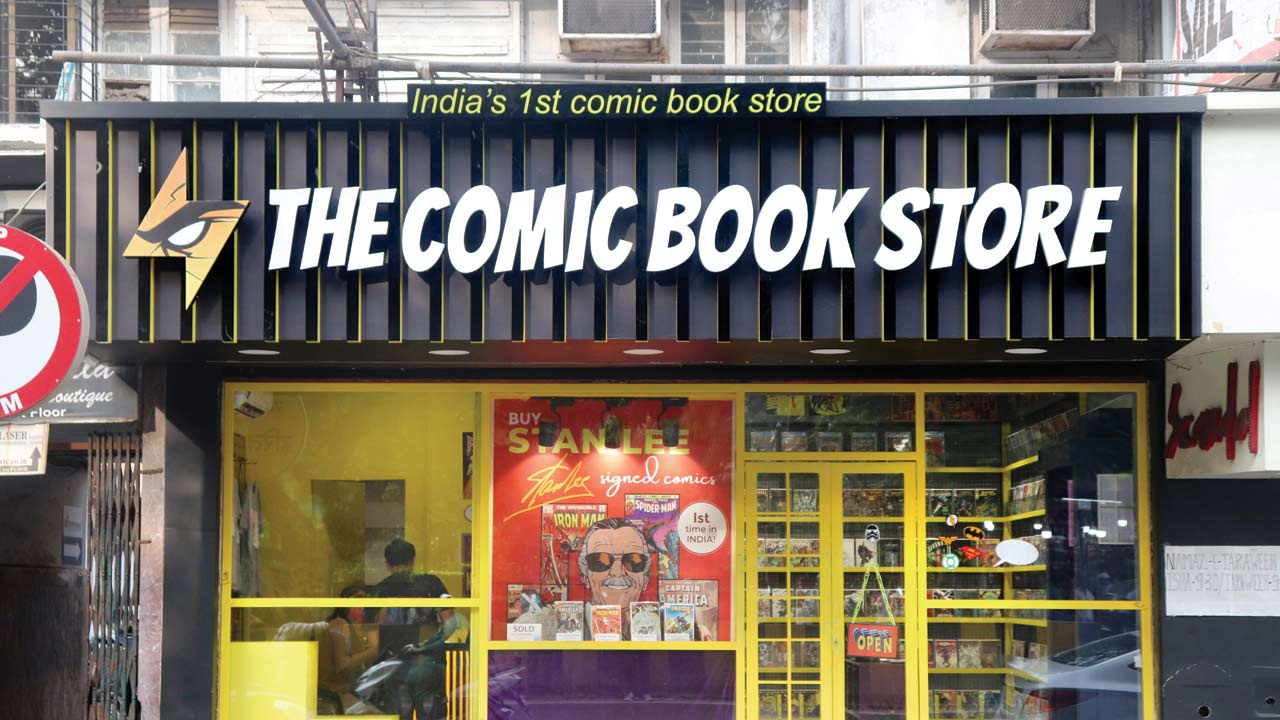 >> Free subculture: Free Comic Book Day is an annual promotional concept in the community of comic book readers. When things pick up, it will be a monthly affair at the store.

>> The Excelsior Acquisition: Remember that one time when Sheldon couldn’t meet Stan Lee at a book-signing event in Stuart’s shop? With that special episode etched in our memory, expect a similar experience. Artist-illustrator Anand RK, who has won an Eisner for his work in image comics, might drop by for a signing session soon. Sayed shares, “He lives in Mahim, and I have already approached him; he has agreed to send across some of his books, too.”

Next Story : Create your own forest