Altogether, Sushant was a director in three companies. The third registered in Gurgaon did not involve Rhea and her brother 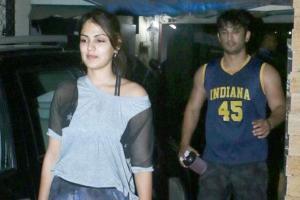 
Late actor Sushant Singh Rajput, whose mysterious death is being investigated, was a director in two companies along with his girlfriend Rhea Chakraborty and her brother Showik.

This clearly shows the convergence of business interests between Sushant and his girlfriend and her bother. Some of the allegations now being made by Sushant's family members, who have filed a case of abetment to suicide against Rhea and others, may well find resonance in the business dealings between the two actors who were in a relationship.

Investigators will now start examining the size, scope and magnitude of the business dealings and whether the relationship led to the deceased actor's financial ruin.

Altogether, Sushant was a director in three companies. The third registered in Gurgaon did not involve Rhea and her brother. The three companies were set up fairly recently in the period between 2018 and 2020.

It is involved in other computer related activities (for example maintenance of websites of other firms/ creation of multimedia presentations for other firms). Its registered address is Flat No. A -503, Sai Fortune, Plot No. 15, Sector 8, Ulwe, Navi Mumbai, PANVEL Raigarh, Maharashtra.

Interestingly, intended or not, this company's name has Rhea in it.

Front India For World Foundation was incorporated very recently on January 6, 2020. It is involved in social work activities. Its authorised share capital is Rs 100,000 and its paid up capital is Rs 100,000. The firm had two directors, Rhea's brother, Showik Shakraborty and Sushant Singh. The registered address is the same as for Vividrage Rhealityx.

The third company where Sushant Singh was a director was based in Gurugram and did not have Rhea or her brother on the board. Innsaei Ventures Private Limited is a private limited company incorporated on April 26, 2018. The other directors were Varun Mathur and Saurabh Mishra. It is involved in other service activities.

Sushant and Rhea were in a relationship before the actor's alleged suicide on June 14. Sushant's father has levelled various allegations against Rhea, including taking money from his son and also threatening him to disclose his medical reports to the media. Sushant's family has also accused Rhea of keeping him away from his family.

After Sushant's father lodged an FIR against Rhea in Patna, accusing her of cheating and threatening his son, the actress on Wednesday moved the Supreme Court seeking transfer of the investigation to Mumbai.

Sushant made his Bollywood debut in 2013 with the movie "Kai Po Che". He was appreciated for his performance in "Detective Byomkesh Bakshy!", "MS Dhoni: The Untold Story", "Sonchiriya" and "Chhichhore".

"Dil Bechara", his last movie which was released online on July 24 on Disney+Hotstar, has drawn praise from the critics.