Grander Ram temple in Ayodhya as per Vastu Shastra

The temple will be built in Nagara style, following the principles of Vastu Shastra 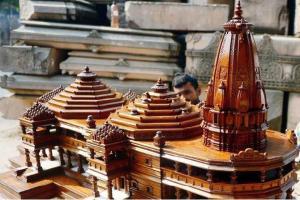 A model of the proposed Ram temple at Ayodhya


The Ram temple that will come at the Ram Janmabhoomi site in Ayodhya in Uttar Pradesh will be on a grander scale compared with one proposed earlier -- it will now have five domes and one tower, increasing the temple height by 20 feet to 161 feet.

The temple will be built in Nagara style, following the principles of Vastu Shastra. The temple design finalised in the 90s had visualised a double-storeyed structure with three 'mandaps' or domes and one 'shikhar' or tower.

According to architect Ashish Sompura, a son of project's chief architect Chandrakantbhai Sompura, the original design had three 'mandaps' -- the 'garbh griha' or the sanctum, and 'kudu mandap' and 'nritya mandap'. But the new design has 'rang mandap' which will be towards the temple front, a 'kirtan mandap' and 'prarthana mandaps' on both sides as well.

Ashish said that since the height of the temple height and floors has been increased, the temple has to be extended on the sides to balance out the design aesthetically.

The columns, which in the original design were 212, have now been increased to 360.

"In the older times, 'nritya' and 'rang mandaps' were used for dance by 'devdasis' (temple dancers). But now the same space would be used by people to have 'darshan' of Lord Ram from three sides," he explained.

Temple chief architect Chandrakant Bhai Sompura, whose grandfather Prabhakarji Sompura had designed the Somnath temple, said that the temple design is based on 'Vastu Shastra'.

The 77-year-old said: "My grandfather had written several books on Vastu and for generations we have been using the art in our designs."

"The Nagara style Ram Mandir is designed keeping the specifications of Shilpa Shastra in mind. All calculations are very particular. For instance, no dimension can be bigger than the sanctum and the direction of the same has to be as per Vastu specifications," said Ashish. According to the architects, the temple construction will take around three-and-a-half years.

Almost 50 per cent of the work, based on the original design -- 106 columns, walls of the sanctum and marble 'chaukath' -- had been done. But since the design is now for a bigger temple, more stone carvings will have to be done.

Besides, four smaller temples will be built around the main structure. The temple trust plans to meet the construction cost through crowdfunding.