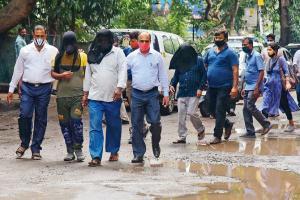 A file picture of TRP scam accused who were produced at the Esplanade Court. Pic/Suresh Karkera


The SIT of the Mumbai Crime Branch (CB) probing the TRP scam, has received an interim forensic audit report of 800 pages. It has confirmed various financial irregularities of accused channels including Republic TV. The Crime Branch has also recorded the statements of four cable operators in connection with the use of dual frequency of Logical Channel Number (LCN) and LCN promotion.

The CB claims that the findings of the forensic report are crucial and supporting evidence to the ongoing probe of TRP manipulation. The report stated, "Increased TRP had resulted in giving power to ARG Media Outlier (the company which owns Republic TV and Republic Bharat) to bargain for higher revenue. Further, it has also valued its share at exponentially high premium by projecting high revenues for future years.(sic)" The forensic report further stated, "The CCPS (compulsory convertible preference shares) of face value of Rs 10 each were valued at a premium of Rs 12,990 each in 2016 before the launch of channel, Rs 32,813 each in Nov 18 and Rs 36,560 each in Dec 2019. ARG also indulged in artificially increasing its share value and collecting investments and routing some of these funds in purchasing its own shares through its parent company at 300% higher value.(sic)"

"Further, certain funds received against the share capital money were routed through its director, namely Arnab Goswami's personal account, which were in turn used in paying off one employee of SARG Media Holding Pvt Ltd, namely Ajay Garg, who subsequently resigned from the directorship,(sic)" the report states. The report has mentioned how each channel including Republic TV, Maha Movies and Fakt Marathi were manipulating the TRPs. The forensic audit report will be included in the supplementary charge sheet which the Crime Branch is expected to file by the end of this year.

The CB is recording the statements of four cable operators from across Maharashtra after they found how Republic TV was manipulating LCN to get more viewership. Two others have been summoned. The manipulation of LCN came to light after the arrest of Republic's distribution head Ghanshyam. The SIT arrested Republic's CEO on Sunday based on a WhatsApp chat where he was found discussing the manipulation of LCN promotion.

A team of Mumbai police led by API Sachin Vaze had gone to Delhi over the weekend to pick up the owner of Republic TV but did not find him. The Maha Movies owner was also not found there. The CFO of Republic TV, Shiva Sundaram, and two other employees have filed an anticipatory bail application which will be heard today.

The Maharashtra State Human Rights Commission (MSHRC) on Monday directed a DCP of Mumbai police's Crime Branch to appear before it on December 16 after a complaint was filed claiming "illegal and indiscriminate" arrest of Republic Media Network's CEO Vikas Khanchandani.