Beleaf it or not

With the lockdown upending their jobs, two pilots pivot to growing vegetables on a terrace using water-based technology 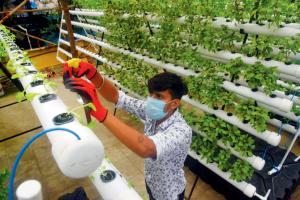 The Chembur facility is equipped with A-frames that can hold up to 432 plants. Pics/Atul Kamble


In 2017, pilot Harsh Parekh was surprised to see a woman harvest coriander and other greens near the railway tracks at Kurla. Since then, he has been admittedly concerned about where the vegetables he consumes are grown. "Around that time, Benjamin Netyanyahu, the Prime Minister of Israel, had come down, and introduced hydroponic farming to PM Modi. Since then, I had been keeping track of developments in this sector," he tells us.

Hydroponics is a method of growing plants in a water-based, nutrient-rich solution. Instead of soil, the root system is supported using an inert medium such as perlite, rockwool, clay pellets, peat moss or vermiculite. 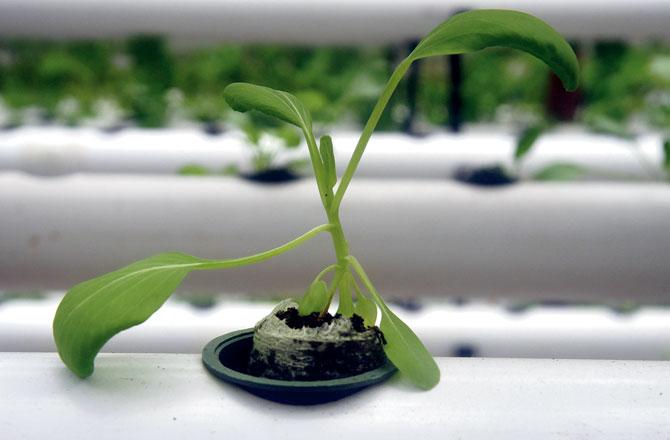 In April, Parekh and fellow pilot Ishan Modi, along with their partners, Garima and Soumya Banerjee, launched FarmJet. Modi says the premise of hydroponics is to allow the roots to come in direct contact with the nutrient solution, while also having access to oxygen. "Since Ishan and I used to fly a lot, we were always living out of a suitcase. Due to COVID-19, we suddenly had a lot of time on our hands. Which is when we thought of setting up the farm."

To supply vitamin-rich veggies to consumers during the pandemic, they began with growing kale, iceberg, lollo rosso, romaine, pakchoi, Italian basil, red basil, baby spinach, rocket arugula and Swiss chard at a terrace farm in Chembur. The terrace proved to be the perfect choice since growing the plants indoors would mean providing them an artificial source of energy instead of sunlight, using LED lights, which would've upped the project's carbon footprint. "In a country like ours, where sunlight is available in abundance, we wanted to go as clean as possible," explains Modi. He says the technology can be used anywhere in the world, at any location. 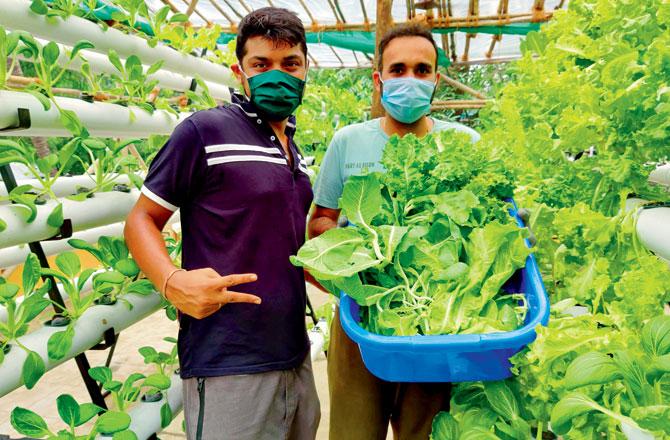 The facility is equipped with A-frames or A-shaped structures of metal, about 6-feet tall with 12 to 20-feet UPVC pipes resting on them. Each A-frame can hold up to 432 plants. Depending on the seeds, the germination process takes around three to seven days, before they can be transplanted into jiffy bags. Jiffy bags are lightweight growbags made of coconut husk and filled with nutrient solution. "They hold the plants and support the roots, making them stronger. But, the key to getting it right is sourcing the right nutrients, in the right combinations, and choosing the right quantity of nutrients to be added in the tanks," says Parekh.

The team spent a fair bit of time experimenting with veggies to ascertain the right seeds that would thrive in the given set-up. "It's awfully expensive to set up a facility such as this, especially with UPVC pipes which cost more than double PVC pipes. On a larger scale, a polytunnel is needed which, again, is expensive. The technology also needs daily monitoring and planning," says Modi.

The advantages, however, outweigh the cons. "It's insecticide and pesticide-free, and because there's no soil needed, there are no weeds and, therefore, fewer pests and diseases. We end up using 11 times less space to produce as much, and only 10 per cent of the water used in conventional farming, which is later recycled," says Parekh.

Well past the concept stage, they now hope to make people aware of this niche technology. "What we really need to battle is the lack of awareness and the unwillingness to pay that extra buck for veggies grown like this."

Next Story : TB or not TB