In a first-of-its-kind move, the Bombay HC allows establishment of a counselling centre on its premises to help couples cope with marital discord 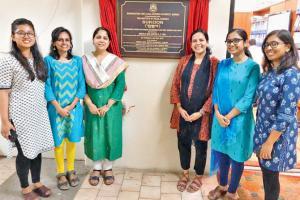 The Sukoon team with counsellors at the newly-opened centre at the Bombay High Court on May 2, 2019


Underlying mental health issues can be exacerbated by the emotional stress of divorce. This journey, from a private life to a public space like a court, is not an easy one. Add to this the circuitous journey of hearings, which last months, sometimes, years. But, a duo from TISS is slowly making a difference by prioritising mental health of litigants. On May 2, the Bombay High Court finally recognised their efforts and set up a first-of-its-kind counselling centre on its premises.

Today, Sukoon, a field action project of the School of Human Ecology, TISS, deals with cases of divorce, child custody and access, maintenance and domestic violence. Sukoon is also involved in pre-litigation counselling at Bombay HC. The journey to setting up the service has been a long one.

Dr Aparna Joshi, practising psychotherapist and assistant professor at TISS, was instrumental in running a similar centre called Seher at the Bandra Family Court. This was back in 2006. The centre was operational for more than four years. "Along with the provision of counselling and psycho-social services, the centre was involved in conducting a number of initiatives, to sensitise the legal system to the mental health needs of litigants. Unfortunately, the project had to be wound up due to organisational and financial constraints," Joshi says.

There was, however, a need to re-initiate the centre. So, along with TISS's Dr Amrita Joshi, Aparna re-initiated the stress management and counselling centre at the Thane and Bandra family courts in March 2017. Amrita, the project's co-director, shares, "The objective of these centres was to hire trained counsellors to provide free stress management and counselling services to individuals, couples and families approaching family courts for matrimonial disputes."

During March-May 2018, a research project funded by the Maharashtra State Commission for Women was carried out. Under this, 100 litigants from family courts of Thane and Pune were interviewed. Amrita adds, "These interactions clearly indicated that matrimonial conflicts and the process of litigation were major stressors for litigants, making it difficult for them to go about their everyday life." Some of the difficulties included anxiety, depression, lack of sleep, low motivation and facing the stigma of separation and divorce. "There were also gendered concerns, such as, in cases of violence against women, women reported the dilemma of being in an abusive relationship versus facing the stigma of divorce, both aspects having dire consequences," Amrita says.

The district and sessions courts address both civil and criminal cases. Therefore, the space in these courts is not conducive to address cases as emotionally charged as matrimonial disputes. "Therefore, Sukoon's services seemed even more pertinent in such settings. In January 2019, Sukoon's centre was set up in the district and sessions court at Kalyan," Aparna says.

But, it was then noted that matrimonial disputes are not only within the purview of these courts, for their cases often get challenged in HC. "Citing this need, the Bombay HC finally decided to share Sukoon's vision, making it the first facility of its kind in an Indian high court," Amrita says. The team now plans to expand the model to courts across Maharashtra.

Next Story : Soon, you can drink out of Mumbai's restored pyaavs