He was rushed to nearby hospital where he was declared dead on arrival. Kharghar cops have filed an Accidental Death Report (ADR) in connection with the incident 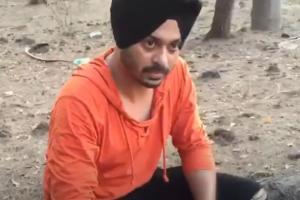 
32-year-old actor Manmeet Grewal committed suicide by hanging himself at his residence in Kharghar, Navi Mumbai on Friday night. Manmeet, was depressed over having no work and debt. On Friday night, he hanged himself in bedroom. Even though his wife tried to save him by lifting him up, reportedly nobody from neighborhood came forward fearing Coronavirus infection.

Manmeet, had acted in daily soaps ‘Aadat se Majboor' and 'Kuldeepak'. He also appeared in few commercials. According to reports, Manmeet Grewal had taken personal loans from friends. After the lockdown was imposed  his work had totally stopped and he was worried about repayment of the loans. According to some of his friends, he was also concerned about how he would pay rent of is apartment.

On Friday night, he hanged himself by the ceiling fan with the help of a odhani (A type of shawl). Manmeet's wife tried to save him by holding his legs and cried for help. But allegedly nobody came forward to help her. Finally cops arrived at the spot as someone from neighbourhood had alerted. Meanwhile, security guard had cut the odhani and took down Manmeet.

He was rushed to nearby hospital where he was declared dead on arrival. Kharghar cops have filed an Accidental Death Report (ADR) in connection with the incident. "The actor was in so much of trouble, that they had mortgaged golden ornaments. He didn't have money to pay Rs 8500 as rent," said an officer from Police station on condition of anonymity.