National Green Tribunal issues notice against the Haji Ali Dargah Trust after student activists file petition, alleging that the shrine is releasing thousands of litres of excrement into the sea 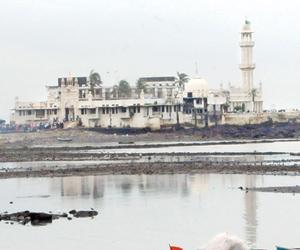 The National Green Tribunal (NGT) issued a notice against the Haji Ali Dargah Trust yesterday to answer allegations that the shrine was illegally dumping waste in the Arabian Sea. The notice was issued after a band of law students from Pune filed a petition before the environmental court on January 23. Justice Jawad Rahim, chairman of the NGT, has given the dargah until March 5 to reply to the allegations. The petitioners are students of ILS Law College – Aamir Shaikh, Deepak Chatap, Vaishnav Ingole, Revati Bagade, Shraddha Savakhande, Rakesh Mali — who recently visited the Haji Ali Dargah and found the shrine and its surroundings in an unhealthy, dirty and unhygienic condition.

Sea of waste
Shaikh, one of the petitioners, said, "Various cloths, flowers, incense sticks, etc, are being brazenly and routinely disposed in the Arabian Sea, as well as all along the nearly kilometre-long approach road leading to the dargah. This is in addition to humongous quantities of human waste being discharged from the toilets in the premises of the dargah straight into the Arabian Sea on a daily basis."

He added, "This discharge forms part of the same water in which children play, thereby being seriously deleterious to the health and safety of those visiting the dargah, in addition to damaging the marine life and ecology of the sea. However, perhaps owing to the sacrosanct nature of the religious tomb, the transgressions have not yet been made a focal point of any serious mitigating action, whether legal or social."

From loo to sea
The students' petition is being led by lawyer Asim Sarode, who said, "The toilets are constructed within the premises of the dargah and have their sewage outlets leading straight into the sea. There is an outlet at about 10-15 feet from sea level, which releases the waste from the toilets." "Around 40,000 pilgrims visit the Dargah on peak days like Thursday, Friday and Sunday. It can be said with a reasonable amount of certainty that at least 25% of such individuals make use of the toilet facilities. Thus, a probable 3,000 litres of urine or excrement is discharged from the toilet facilities into the sea on a daily basis. The ecological harm caused to marine life owing to such practice is monumental and irreparable. There is absolutely no system at this place to treat the sewage or ensure that such is not polluting the immediate surroundings," he further explained.

The students also observed a huge amount of plastic waste (bottles, carry bags, gutkha wrappers) at the shrine, and have submitted photographs as evidence. He added, "The erring parties seemingly operate with impunity. Interestingly, several legal luminaries and senior politicians are on the board of trustees of Haji Ali Dargah," said Shaikh.