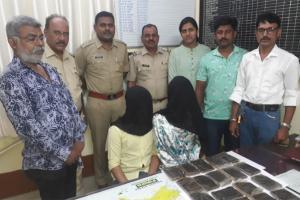 
The Wadala police have seized 4.5 kilograms of hashish worth Rs 9 lakh from 2 persons on Wednesday afternoon. Cops have also arrested the 2 persons in this connection to the crime from Hariyali Hotel, Wadala (E).

On 17th July at noon, Police sub-Inspector Ashwini Mane received information that 2 persons will be arriving at Wadala in order to sell some hashish. A trap was then laid by the Wadala cops and they managed to nab the two suspects near Hariyali Hotel in Wadala (E).

Cops recovered 4.5 kilograms of hashish from the duo with a worth of Rs 9 lakh in the market. The accused are identified as Mushtaq Anwar Ali, 22, resident of Jari Mari Mata Mandir, Sakinaka and Mahmood Umar Hussain Jeeva, 52, resident of Versova, Andheri (w).

Cops are currently investigating the case trying to find out their target customers as well as the source from where they got the drug. A process to book both the accused is currently underway.

Next Story : Building collapse: Dongri a hub of illegal constructions