Mumbai Rains: Short spells of thundershowers likely for next 4 days

With a drop in the intensity of the rains on Friday, Skymet has reported that the frequency of the showers will further reduce significantly 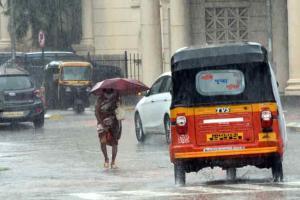 This picture has been used for representational purposes. Picture/Satej Shinde


Mumbai has been witnessing heavy to very heavy rains from Monday that has left many low-lying areas inundated in the city and suburbs. The incessant rains also led to three building collapse incidents.

With a drop in the intensity of the rains on Friday, private weather agency Skymet has reported that the frequency of the showers will further reduce significantly.

Heavy downpour continued over #Mumbai and suburbs. #Santacruz recorded 155 mm and #Colaba 24 mm #rain. Significant decrease in rain is anticipated now. Rains will be patchy for next 3 to 4 days. #MumbaiRains @mybmc @SkymetWeather

According to Skymet, the drop in the intensity of the showers in Mumbai is due to the east-west shear zone that was over north Konkan regions, and Goa and was persistent over the city is moving towards the north. The convergence of the low-level wind is also seen to be weakening that has led to a reduction in the rains.

However, Skymet also reported that the skies will remain cloudy with occasional rain and thundershowers likely to continue for the next three to four days. Moreover, the city temperatures will also see a slight increase in the coming days.

On Thursday, heavy rains lashed Mumbai and suburbs with Santacruz recording a three-digit rainfall for the second consecutive day with 155 mm rain. Meanwhile, Colaba recorded 24mm rains in the 24 hours. Instances of waterlogging were also reported from low-lying areas such as Matunga, Dadar, Santacruz, Bandra, and Antop Hill.