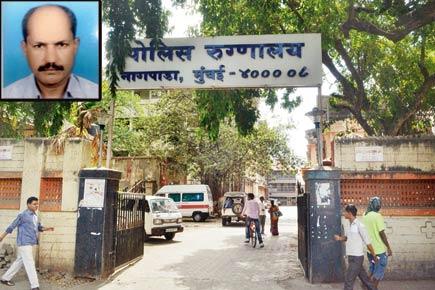 A doctor at the Nagpada Police Hospital, the nodal health centre for the police force in Byculla, has come under the lens of a high-level committee formed last month to probe the death of a State Reserve Police Force (SRPF) cook during treatment at the facility last December. 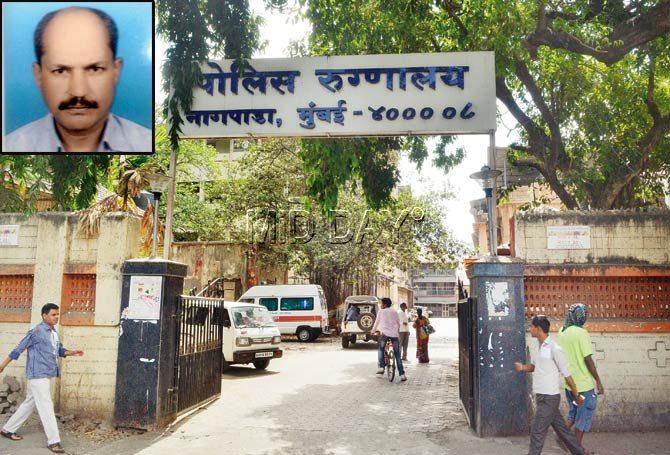 Booba Poojari (inset) was admitted to the Nagpada Police Hospital for weakness on December 3, 2015. Pic/Datta Kumbhar

In cold storage
The cook, Booba Poojari (48), reportedly an alcoholic, had served as an assistant cook with SRPF Group B for over 20 years. On December 3 last year, he was admitted for weakness to the police hospital under the care of Dr Sanap. He died six days later. Poojari’s body was sent to JJ Hospital for an autopsy and the Nagpada police registered an accidental death report under Section 174 of the CrPC.

Soon after, a letter, reportedly signed by Poojari’s son, Kaushal, was sent to the CM, requesting a high-level probe into the matter. Kaushal (19), however, told mid-day that neither has he written the letter nor does he have a complaint against anyone.

The matter went into cold storage, but last month, the police surgeon received a letter from the deputy director of health services, Thane, asking for a probe into the death. Accordingly, a committee was set up and it found serious lapses on the part of Dr Sanap.

Dr Patil confirmed that a probe was conducted against Dr Sanap. “The histopathology report [of Poojari] is awaited. Only forensic surgeons can tell us the exact cause of death after they receive this,” he said.

‘No one will be spared’
While Dr Ratna Raokande, deputy director, health services, said she has asked the police surgeon to send a detailed report within a week, along with the statements of nurses and other hospital staff, Dr Patil said the report was sent to the health department last week itself. Dr Raokande refused to comment on this claim.

Dr Mohan Jadhav, director, health services, said he is yet to see the report. “In case any negligence is found on the part of the treating doctor, necessary action as per the rules will be taken.”

Anup Kumar Singh, JCP (administration), said the report is with the health department and it is up to it to take the necessary course of action.