The first of the two accidents occurred in the wee hours, at Ghodbunder Road in Thane, where an SUV carrying six men turned turtle. The second mishap took the life of a scrap labourer in Goregaon 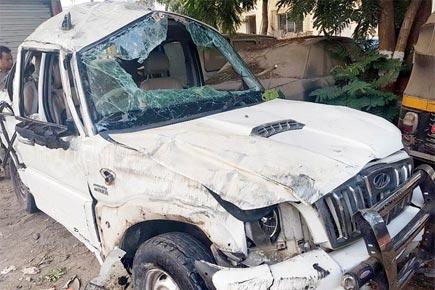 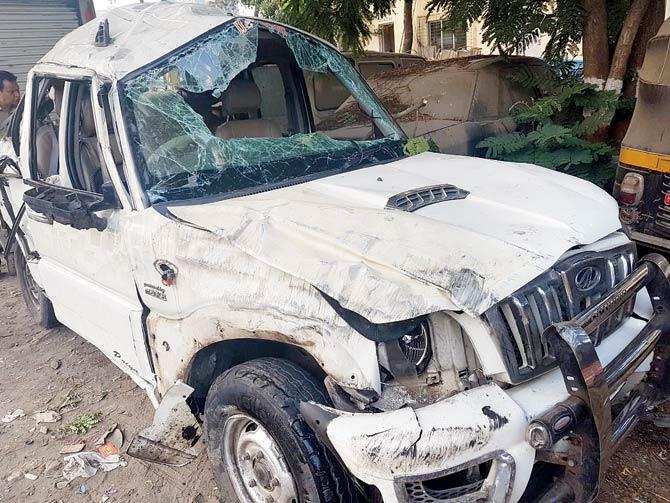 Two fateful road mishaps killed three in the city on Thursday. The first of the two accidents occurred in the wee hours, at Ghodbunder Road in Thane, where an SUV carrying six men turned turtle. The second mishap took the life of a scrap labourer, who died after being run over and dragged by an ambulance.

Revelry ends in disaster
In the Ghodbunder Road mishap, the six passengers have been identified as Rahul Pawar who was driving the car, accompanied by Santosh Sanghvi, Ravi Bangare, Ankit Solanki, Chetan Rajendra Chavan and Nikhil Palan, all resident of Wagle Estate in Thane.

They were travelling in an SUV in high speed, when Rahul lost control and hit a pole, after which the car turned turtle more than three times in front of Rutu Enclave Society. “The incident took place at around 2:15 am. I heard a loud noise and when I came out to see the car, I saw that it had turned turtle more than three times,” said N Sawant, the watchman of the building. Chetan and Nikhil succumbed to their injuries, while Santosh, Ravi and Ramdas are admitted in the ICU. Rahul has suffered minor injuries and is undergoing treatment.

“We have registered a case against Rahul, who was driving the vehicle and are further investigating the matter,” said DD Tele, senior police inspector, Kasarwadavli police station. “All of them were drunk and were heading for dinner, when they hit a pole. The pole was totally bent. We suspect the driver hit the accelerator, instead of the brakes,” said an official who visited the spot late at night.

Death by ambulance
Later in the day, Goregaon was witness to a brutal accident that ended in the death of a Anis Shaikh, a 32-year-old scrap vendor. Police sources said a speeding ambulance hit Anis while he stood speaking to a man when he was walking around with his handcart to collect scrap between Lane 4 and 5 of MG Road in Goregaon West. Cops said that the ambulance dragged Anis till a nearby tree, where he got stuck in between. “Anis was rushed to the Siddharth Hospital. The bones in his left leg were broken into pieces and his hand, too, was broken,” said Kutbuddin Khan, a relative. He added, “Doctors were roaming around and didn’t start his treatment; no one was ready to touch him. Finally, a doctor came and pressed his chest five times and said that Anis had died.”

The ambulance driver, identified as Bhushan Pawar, suffered minor injuries and has been arrested by the police after being administered first aid. A police official from Goregaon police station said, “We also took samples of his blood to check whether he was drunk at the time of the incident.”

Next Story : Cong-NCP to stage yatra across Maharashtra for loan waiver for farmers