Penguin poll plank: Nitesh Rane the latest to jump on it

Congress MLA-led NGO Swabhiman Sanghatana protests outside Byculla zoo, demands that the project be scrapped and the remaining birds sent back

The controversial penguin project is now facing opposition from another quarter — NGO Swabhiman Sanghatana, led by Congress MLA Nitesh Rane, staged a protest outside Byculla zoo to scrap the project and send the penguins back.

The cold truth
Yesterday afternoon, workers of the non-governmental organisation gathered in front of the zoo gate and protested against the project and termed the death of one of the aquatic birds as murder.

The protest went on for at least an hour. Sanghatana has written a letter to the zoo director, warning of an intensified protest if demands are not fulfilled. 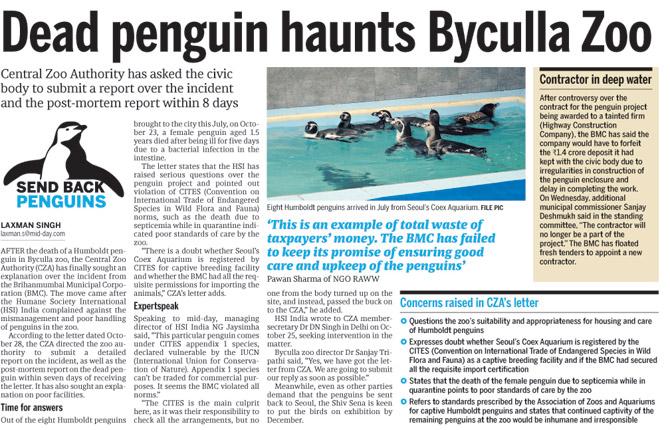 Speaking to mid-day, Rane said, "I had opposed the project right at the start, because penguins are used to living in cold climate, and hence, Mumbai is not an ideal place for them. My concerns proved right... The BMC did not make the required arrangements, leading to the death of one penguin."

"This project has been nothing but a waste of money… one for personal profit, like a stubborn child fulfilling its wish for entertainment. The civic body should send back these penguins. If it fails to, we will intensify our protest," he added.

Opposition all round
On July 26, Shiv Sena-led BMC had brought eight penguins from Seoul in South Korea. Because it was a pet project of Yuva Sena chief Aaditya Thackeray, the civic body brought the penguins in spite of the exhibits not being completed.

After the death of one female penguin and revelation of fake documents submitted by the contractor, opposition parties slammed the BMC and Sena. They all have demanded that the remaining penguins be sent back and an inquiry into the project be set up.

Opposition leader Pravin Chheda has complained to the Lokayukta about irregularities in the project. A few days back NCP workers had put up a board taunting the Sena — "Marun Dakhavla" (murdered the bird), with a photo of the penguin attacked by an arrow.

Animal and bird activists too are up in arms. Sunish Subramanian of PAWS (Plant and Animal Welfare Society) has written to the environment minister and the Central Zoo Authority to cancel Byculla zoo's recognition, send back the birds, and register an FIR against the BMC, zoo authorities and the contractor for forging documents to bag the project and for not taking proper care of the bird.