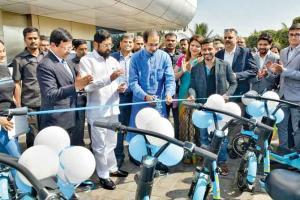 The CM launched the first e-bike project at BKC in March. File pic


Mumbai railways, it seems, is slowly building up infrastructure for the post-pandemic era. Both Central Railway (CR) and Western Railway (WR) have embarked on setting up charging bases and parking spaces for app-based electric bikes and electric autos to provide last-mile connectivity from most of their stations.

While CR has allotted the spaces and invited bids for six major and crowded railway stations, WR has finalised plans to survey and narrow down stations and locations.

"Charging stations are the reality. The finalised areas at the entry-exit points of railway stations have been earmarked as per availability for charging stations, which also have a parking facility," a senior CR official said.

"For running app-based electric cycle/bike services, space will be provided in the demarcated area with charging stations. At CSMT, an about 63-sqm area has been earmarked and at Kurla, we have around 115 sqm. The basic concept is to help commuters in last-mile connectivity from suburban railway stations," he added.

"Commuters will have to download an app and scan the QR code to unlock the cycle. Usage fees will be deducted through the app. For e-auto, CR has allotted work orders at Kurla West and Ghatkopar East and floated open tenders for services at Thane West (two sites), Mulund West and Bhandup East," he said.

WR chief public relations officer Sumit Thakur said they are not behind. "We are planning to float tenders and invite bids after doing location surveys," he told mid-day. The idea originated at Kurla railway station in early March after Chief Minister Uddhav Thackeray inaugurated a project for e-bikes at BKC on behalf of the Mumbai Metropolitan Region Development Authority (MMRDA).