The function on Wednesday will be presided over by Mumbai University Vice-Chancellor Suhas Pednekar and Vice-Chancellor of Central Institute of Higher Tibetan Studies, Varanasi, Geshe Ngawang Samten 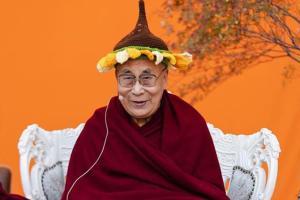 
Tibetan spiritual leader the Dalai Lama, will address students at prominent institutions here during his three-day visit to the city, an official statement said on Tuesday. The 14th Dalai Lama will deliver the inaugural address at the International Conference on the "Concept of Maitri (Metta) in Buddhism", organised by the Department of Philosophy, The Centre for Buddhist Studies at the University of Mumbai.

The function on Wednesday will be presided over by Mumbai University Vice-Chancellor Suhas Pednekar and Vice-Chancellor of Central Institute of Higher Tibetan Studies, Varanasi, Geshe Ngawang Samten.

On Thursday, the 83-year-old leader will speak on 'The Compassion and the Need for Universal Responsibility' at the 11th Silver Lecture to be held at the Guru Nanak College, Sion. The next day, he will address the 22nd TechFest 2018 at the Indian Institute of Technology-Bombay (IIT-B).

Started as a departmental festival, the TechFest is now ranked as Asia's largest science and technology celebration and a conglomeration of scientific thinking and innovations.

Besides, the Friends of Tibet will organise a photo-cum-painting exhibition, film screenings and a Wellbeing Tibetan Medical Camp in the city in honour of the Dalai Lama's visit.

The highlight would be the Dalai Lama's pictures clicked by Suresh Natarajan and paintings by Ravikiran Parameshwar.

The day-long free medical camp Thursday will be held at the IDC School of Design in the IIT-B to be conducted by Dorjee Rapten Neshar, the CMO of Men-Tsee-Khang, Tibetan Medical and Astrological Institute of the Dalai Lama.

Next Story : Cong loss in Ahmednagar civic polls a blow to Thorat and Vikhe Patil