Deonar dump fire: In absence of CCTVs, cops turn to ragpickers for clues

Although the Deonar dump yard had 10 CCTV cameras, some were stolen, while the rest have not been functioning since the contract expired two months ago 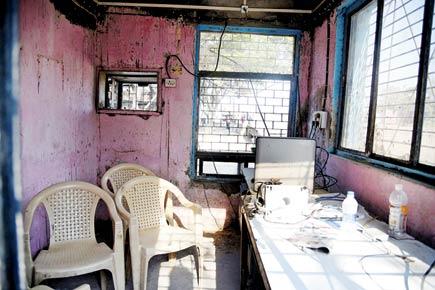 The police’s hopes of using CCTV footage to identify the culprits responsible for Thursday’s fire at the Deonar dumping ground have been dashed after it was found that none of the 10 cameras at the site are in working condition. Undeterred by this, the police have now turned to local ragpickers for clues. 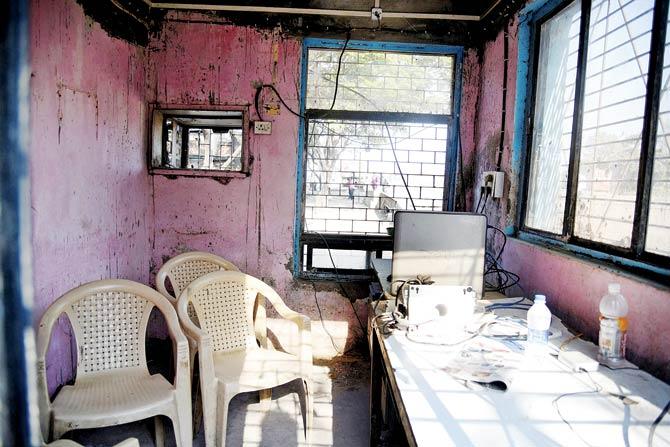 When mid-day visited the spot, not only were several CCTV cameras missing, but even the monitoring system wasn’t there at the command centre. Pic/Sameer Markande

CCTV cameras were installed at the dumping ground just last year. However, none of them have been functioning for the past two months, ever since the contractor’s term expired.

Minesh Pimple, deputy chief engineer at BMC’s solid waste management department, said, “Ten CCTV cameras had been installed at different points -- four near the entrance, to keep a watch on dumpers and six cameras, two each on the three way bridges at the yard. But a few were robbed and the rest haven’t been functional for more than two months.”

mid-day visited the CCTV command centre and found it in an equally pathetic state. Not only had several cameras been stolen, the monitoring system itself was missing from the command centre. Pimple said the system was taken away by the contractor at the end of his term and has not been replaced since.

“At the end of the one-year contract, the monitoring system developed some issues and the contractor took it away for repairs, but it wasn’t brought back after that. Since the last two months, we have been in the process of floating a new tender, which led to a delay in the installation of a new CCTV system. Soon, new cameras and monitors will be installed and we will be able to keep a tab on the dump yard again,” he added.

Too little, too late
BMC officials said Rs 5 lakh has been sanctioned for the installation of cameras and the process started yesterday. However, Samajwadi Party corporator Rais Shaikh said this was too little, too late.

“It is after the fire that the authorities have woken up and started installing cameras. If the cameras had been active at the time of the fire, the accused would now be behind bars. This is absolute negligence. Not just installation, but proper maintenance is also required. The monitoring system itself was missing, and the cameras developed issues because of the dust from the yard,” he said.

Ragpickers enlisted
The police may not have eyes in the sky at the yard, but it now has thousands of eyes and ears looking for clues, after local ragpickers were roped in to help the probe.

“We have approached ragpickers living in the vicinity and asked them to report any information they may have on the fire and have also asked that they keep an eye out for anything suspicious,” said an officer from the Shivaji Nagar police station.

The police are already on the hunt for three juveniles who were spotted trying to start another fire at the ground on Saturday, even as fire officials were trying to control the smoke from the earlier blaze on Thursday.

The dumping ground has now been shut temporarily and ragpickers are no longer being granted access. However, cops are hopeful that they might still have some information on either Thursday’s or Saturday’s incidents.

Juvenile arsonists
On Saturday afternoon, around 12.58 pm, fire official Sampat Karade (50) was part of the team trying to quell the smoke billowing from the dump yard, when he spotted kids lighting another fire there. “He said he saw three kids of about 10 to 12 years trying to start another fire about 300 metres away. He started to pursue them, but they fled and he could not locate them in the vast yard,” said Police Inspector Hussain Jatkar.

An FIR was registered against the unidentified boys under Sections 427 (mischief causing damage), 435 (mischief by fire or explosive substance) and 34 (common intention) of the Indian Penal Code. The Shivaji Nagar police had registered a similar case in 2014, after a fire had broken out in the dump yard.

The police suspect the boys could also be ragpickers who were trying to burn the waste to salvage metal and other valuable items from it. “Normally the ragpickers burn wires and other items to get metal from it, but this can result in a major blaze. Such fires can also start when someone throws a lit cigarette on the ground,” said a police officer.

Next Story : Ragpickers' livelihood takes a hit after Deonar dump yard is shut