The iconic venue drew Sena followers in droves from within the city and outside; unmindful of the split in the party, they called their presence a ritual 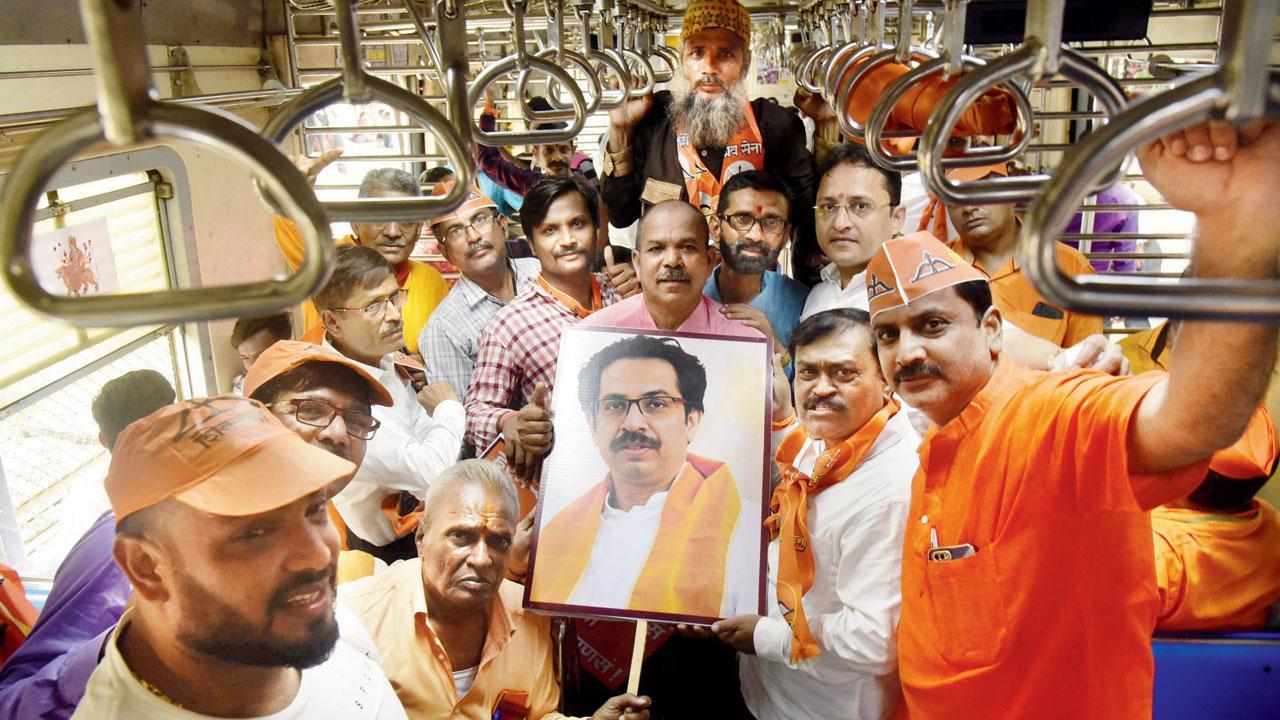 
Thousands of men and women thronged the Shivaji Park to attend the Dussehra rally of Uddhav Thackeray on Wednesday, calling it their duty towards loyalty and legacy. Several of them came from outside Mumbai as well. The Uddhav faction’s annual rally took place at the iconic venue after a COVID-enforced gap of two years. It was also for the first time supporters had to choose between two leaders of the party—Thackeray or Eknath Shinde.

Since morning, supporters trickled into the ground. They came by private vehicles, local and long-distance trains. The area around the Dadar ground was filled with huge cutouts of Thackeray as well as Chief Minister Eknath Shinde, the head of the rebel group.

As the evening progressed, the crowd started swelling in the ground. Soon, all chairs were occupied, prompting others to sit on the ground as everyone waited for their leader to address the gathering.

Shakil Bhai Qureshi, the deputy shakha pramukh from Masjid Bunder walked all the way from Regal Cinema to Dadar to attend the rally. For over a decade, Qureshi said, he has been a staunch Sena supporter and chose to remain with the Thackerays after the split in the party. He hung two banners around the neck and started at 11 am and reached at 3.30 pm.

“I walked all the way for the Dussehra rally of Uddhav ji because I want the Muslim community to come together and support the Shiv Sena. The way Uddhav ji handled the Covid situation during his tenure is commendable. Those who back-stabbed him for their personal benefits will have to face the consequences in coming elections.”

Balasaheb Kasar, who had come with another party worker from their village in Mulshi Taluka of Pune district, said he has been attending the Sena’s Dussehra rally since 1986. “We all come here in our own vehicles. Nobody asks us to visit this place, we come here on our own. This is a ritual for Shiv Sainiks.”

Ishrat Shaikh, a karyakarta from Goregoan, said, “We have been coming to Shivaji Park for more than 15 years. We only follow Thackeray, no one can take his place.” Bhandup resident Sujay Kanade has been a part of the audience for over 10 years. “Every year, my friends and I come to attend this rally. No forces us, this is like a tradition for us.”

Hanumant Kharat covered nearly 360 km from Pandharpur to be a part of the event. “Many leaders have deserted the Thackeray family, but the grassroots karyakartas are with them,” said the 67-year-old, adding that he has been attending the rally for the past five years. “We don’t even expect that someone will provide us with food. We come at our own expense.”

Kedar Kale, 55, came from Hingoli, which is over 500 km from the city.  “I’m a farmer, all I need is bhakri. We come here for the Thackerays,” he said as he relished dal khichdi distributed by the party’s transport union. About 50,000 packets of chivda, snacks, were also distributed among the party workers. Anil Deshmukh of Ulhasnagar said he came to the rally for the first time. “I used to watch the rally on television every year. This year I came here to extend my support to Uddhav Thackeray.”

While Thackeray’s speech ended at 8.33 pm, some from the audience began leaving the venue. They told mid-day that they didn’t want to miss their trains as they had come from outside Mumbai. A few others said they wanted to avoid the traffic. None of them agreed to be photographed or identified.