Mumbai eateries will find it hard to keep reusing stale oil. Here's why

From next month, the food watchdog will scrutinise restaurant records to check whether they are re-using stale oil beyond the permissible limit 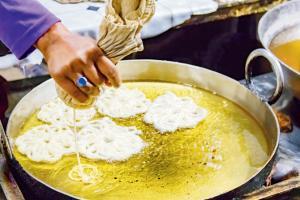 
Soon citizens won't have worry whether their French fries or bhajias were cooked in stale oil. Come March 1, restaurants and eateries will find it hard to keep re-using stale oil, with the Food and Drug Administration (FDA) carefully watching their oil consumption.

Re-using oil can cause severe health issues like high cholesterol, blood pressure and liver issues. The new rules of Food Safety and Standards Authority of India (FSSAI) now prohibit cooking more than three times with the same oil. To ensure that the rule is followed, eateries will be required to keep a log of their purchase and use of edible oils from March 1. The FSSAI has directed all Food and Drug Administrations (FDA) across the country to notify restaurants using more than 50 litres of oil per day to maintain a daily chart.

As per the Food Safety and Standards (Licensing and Registration) First Amendment Regulations, 2017, use of edible oils more than three times is forbidden, as it leads to severe health consequences. "Repeated usage of cooking oil leads to changes in the physiochemical, nutritional and sensory properties which cause severe health issues. During frying, total polar compounds or TPCs are formed in the oil, which are also called frying fats. The regulation has been introduced to stop this," said Pallavi Dadare, commissioner of FDA (Maharashtra).

As per the new rules, the TPC limit is 25 percent, beyond which the oil is not suitable for use. "To ensure that such used cooking oil is neither directly used in the food preparation nor reentered into the food chain, it has been decided that all Food Business Operators whose consumption of edible oils for frying is more than 50 litres per day, shall maintain the records and dispose used cooking oil to agencies authorised by the Food Safety and Standards Authority of India or Commissioner of Food Safety of States/UTs from time to time," reads the notification sent by FSSAI.

Restaurants will have to submit data such as name of the oil, quantity of oil taken for frying, quantity discarded at the end of the day, date and mode of disposal and which agency the oil was handed over to. "Overuse of edible oils can lead to health issues like high cholesterol, blood pressure and liver issues. It is always advisable not to use same cooking oil on a regular basis. This accountability can help to control this habit in hotels," said Dr Saurav Mehta, a general physician.