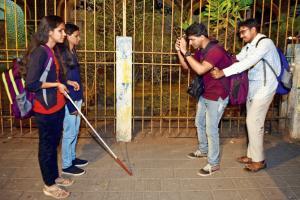 
"It's like if you walk around with a white cane in your hand, then you must be begging," Babita Saroj, a third year BMM student at St Xavier's College says. The 22-year-old has 75 per cent visual disability, and is a dancer, mallakambh player and actor.

She even represented the country at an Accessible Tourism in South Africa. Concerned about the stereotypes the visually challenged face, she along with a group of students from the city has launched an initiative that aims to shed light on their diverse talents.

VCparty6 was initially set up as an email group for sharing notes among visually challenged students five years ago. Only last month, it was converted into a participatory initiative, ideated by Xavierites Jayesh Panchal, Shahul Bhujbal and Talha Ansari, to change perceptions about the blind with about 15 members on board.

"Someone once gave me biscuits at the CSMT station saying it was 'bhagwan ka prasad' and ran away," Ganesh Phalke, a final year BA student recalls. "I completely lost my vision in 2009. We have to really keep proving ourselves. Of course, you should help a visually challenged person cross the road. But there is no need to give us special treatment," he said.

The group is now open to suggestions from people to help take the project ahead on social media. So far they have received responses from visually challenged students from Delhi and Rajasthan with suggestions for creating a hashtag. "I want to address the issue by including fun elements in our writing and storytelling through videos," said TISS student Ajaykumar Shukla, who is working on creating video content for the group. Ansari said, "A lot of times policies are discussed without consulting us. A lot of NGOs are run by people, who don't know anything about what it means to be visually challenged. If time and resources permit, we will expand this into something more ambitious."

Next Story : Mumbai: Cleaner dies as Metro barricade rips through bus in Goregaon