According to the workers, the animal had taken refuge near buffaloes after it lost its way or was chased by dogs 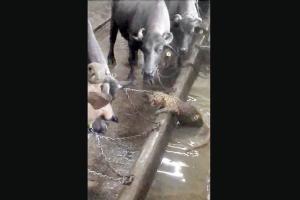 Screenshot of the video showing the cub near the buffaloes


In what can probably be called the first record of a leopard sighting in the daytime, a leopard cub which may have lost its way or been chased by stray dogs, entered a tabela at Aarey early Tuesday morning. However, alert workers correctly guided the wild cat away following which it vanished into
the trees.

On Tuesday morning, around 7- 7:30, workers milking the animals at the tabela of Farhan Patel unit number 13 in Aarey got the shock of their lives when they saw a leopard cub inside the area. The workers immediately left the area and gathered to one side and soon realised that the animal looked frightened and had taken refuge near the buffaloes. The workers informed the tabela owner who instructed them not to disturb the animal and guide it back to the forest patch.

Patel told mid-day, "Aarey Colony is a forest and so sighting leopards is quite common for us. The people working in my tabela were surprised to spot the leopard inside the place, but it might have entered after losing its way or being chased by other animals."

The video of the leopard soon went viral on social media and Additional Principal Chief Conservator of Forest Sunil Limaye instructed a leopard rescue team from Sanjay Gandhi National Park (SGNP) to reach the spot and create awareness among the locals.

On Tuesday evening, a team of independent volunteers involved in camera tracking exercise to study leopard movement in Aarey also visited the spot and camera traps were installed in the forested patch. On Wednesday, Range forest officer (RFO) Vijay Barabde who is also in charge of the Leopard Rescue Team along with his staff visited the area and informed the locals about the dos and don'ts when they spot the big cats. A local also told mid-day that a tribal who had gone in the forest along with his goats for grazing had spotted a mother leopard with her cubs. As per trecords, there are around 6 to 8 leopards in Aarey Milk Colony.

6-8
No. of leopards currently in Aarey Milk Colony

Next Story : Eknath Khadse blames his exit solely on Fadnavis