Mohit Kamboj Bharatiya claims a ‘big big’ NCP leader will be in jail soon; as he also demands the reopening of irrigation scam inquiry, all eyes on former deputy CM Ajit Pawar on Day 1 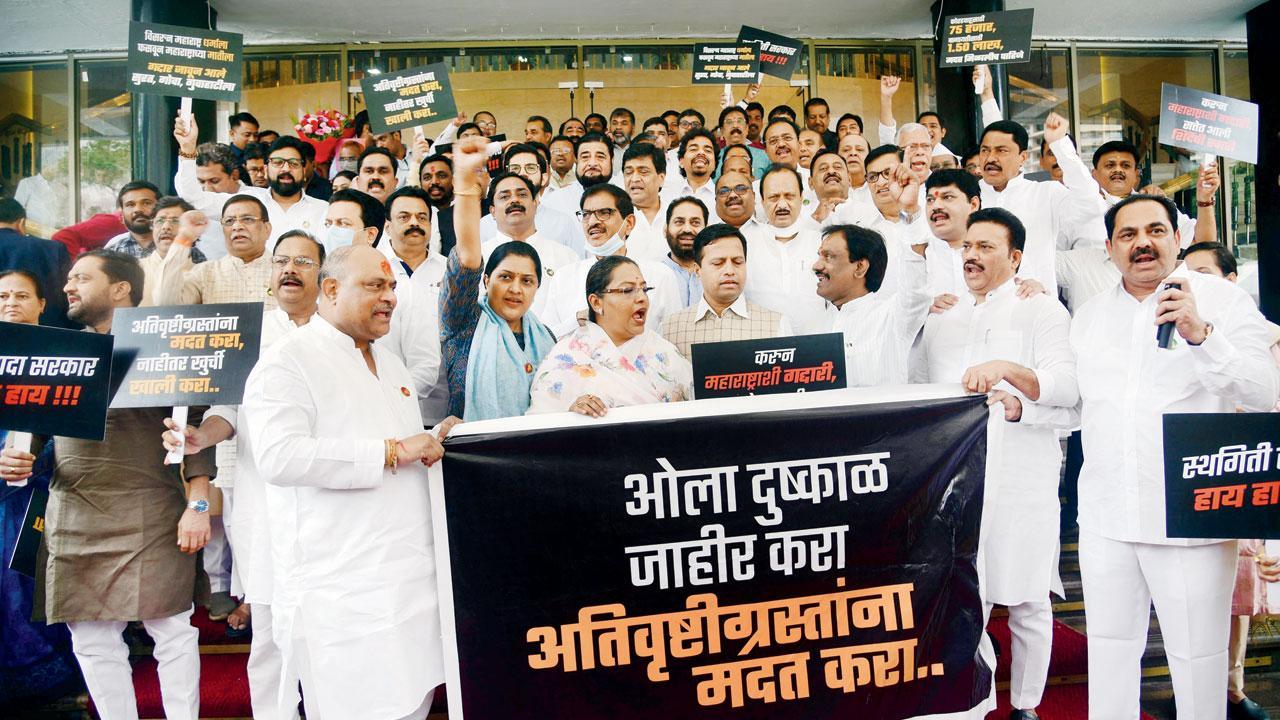 Opposition leaders from Sena, Congress and NCP protest during the monsoon session, at Vidhan Bhavan on Wednesday. Pic/Pradeep Dhivar


A social media post by BJP leader Mohit Kamboj Bharatiya claiming that a senior NCP leader would soon join his party colleagues, the former ministers Anil Deshmukh and Nawab Malik, in the jail created quite a flutter on the first day of the monsoon session of Maharashtra legislature.

Since Bharatiya demanded that an irrigation scam be reopened for inquiry, all eyes were on former deputy chief minister Ajit Pawar, now Opposition leader in the Assembly, who had faced allegations in the matter related to the irrigation (water resources) department.

Bharatiya tweeted on Wednesday that the scam,  the probe in which was closed in 2019 by Param Bir Singh, be reopened for inquiry. Sources said the case closure report that was filed by the ACB is still pending in the court. 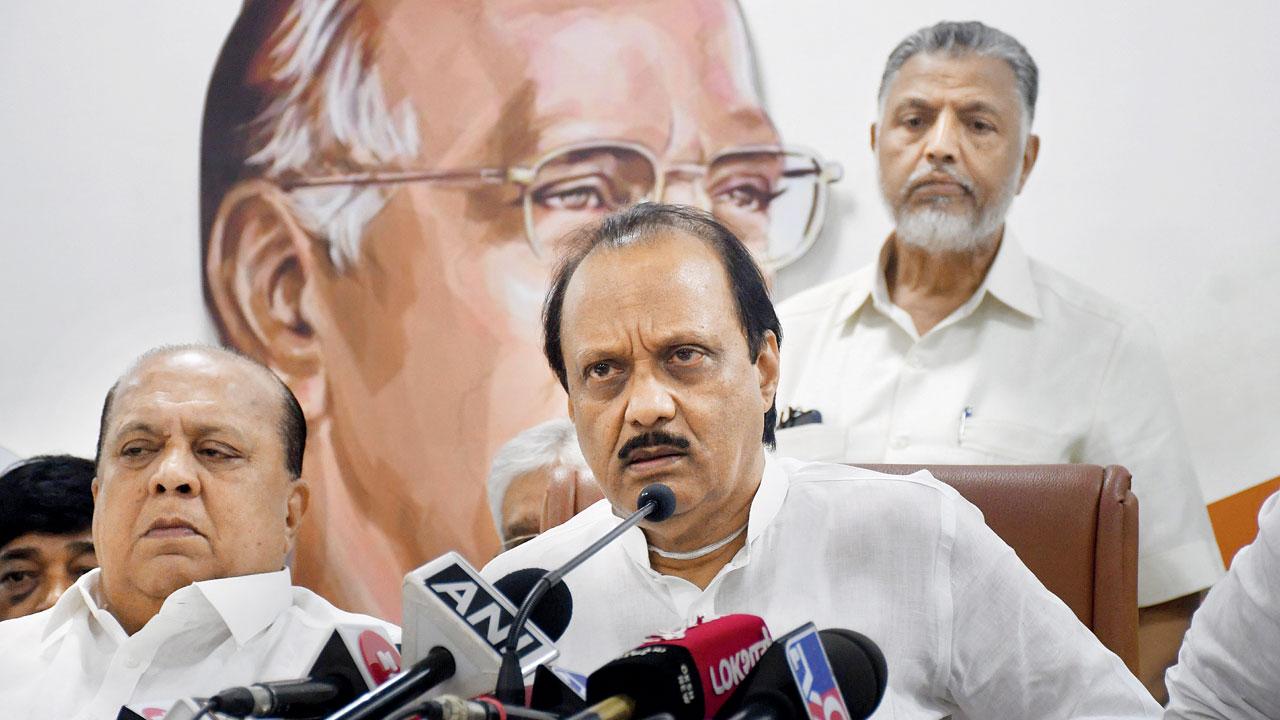 In the past, his predictions about the arrests by central agencies had proved correct. He listed four names—Deshmukh, Malik, Sanjay Raut, Sanjay Pandey and kept the fifth place blank, adding, “my strike rate is 100 per cent”.

Opposition leaders said it was an attempt to muzzle them ahead of the session. NCP spokesperson Amol Mitkari said Bharatiya was BJP’s parrot. “We don’t get scared by such threats. They don’t speak on farmers’ issues, GST. Bharatiya should also be investigated if he knows where the ED [Enforcement Directorate] would raid next…” Mitkari added. Deputy CM Devendra Fadnavis refused to comment, but BJP’s Pravin Darekar said the NCP shouldn’t worry about the tweet if they were clean.

Mumbai BJP president Ashish Shelar also said Bharatiya’s strike rate was 100 per cent. “I’m not part of the government, but a member of the ruling party. I will not speak about Pawar’s case or the indications of inquiry. The government will give information. Bharatiya may have evidence and he may furnish it. If someone has evidence, he can tweet and make claims. Democracy allows it,” added Shelar.

The state legislature continued to witness unprecedented occurrences with the chief minister and Opposition leader in the legislative council coming from the same party, at least on record. The rebellion in the Shiv Sena has also caused a peculiar situation in the Vidhan Bhavan as the members were split into both the ruling and Opposition sides. In the upper house, the Uddhav Thackeray faction of the Sena has got its member Ambadas Danve as the Opposition leader. The two groups came face-to-face in both the houses, but not much happened on the first day as the proceedings ended by early afternoon. 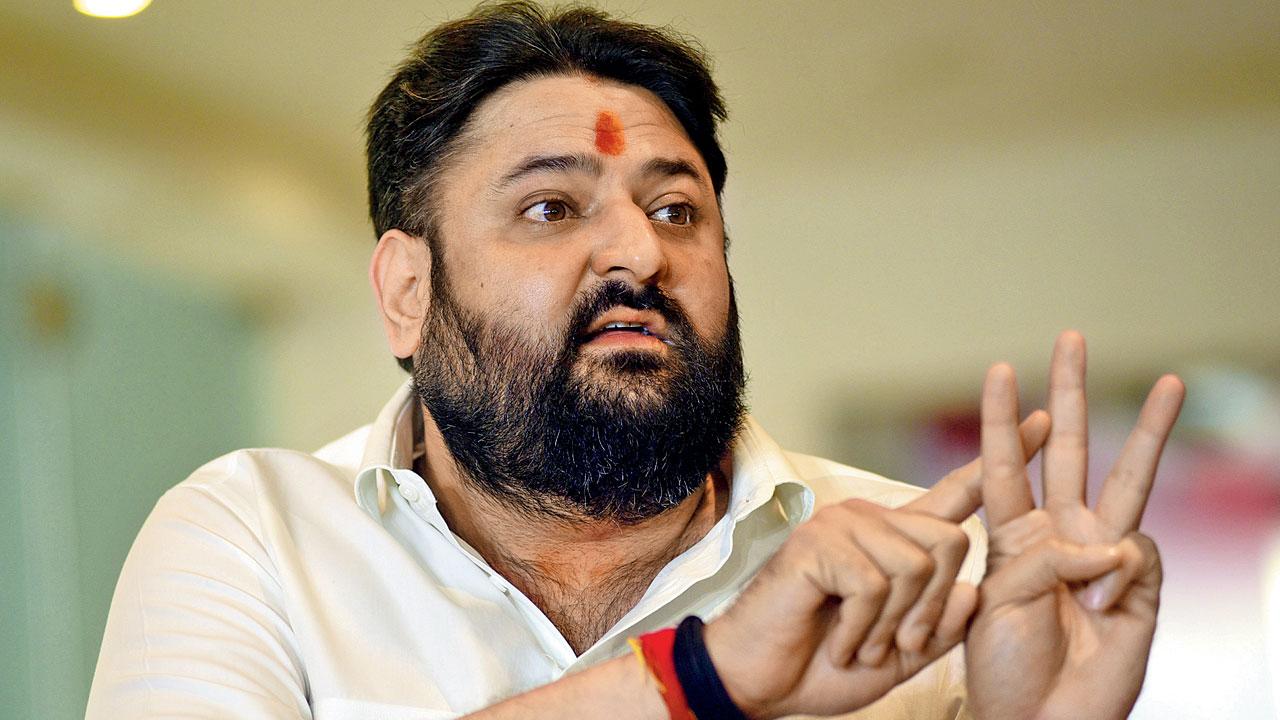 The first day saw the Opposition members agitating on the steps of the Vidhan Bhavan. They shouted slogans, made a purported reference to the money spent on the transfer of power even as the Shinde faction MLAs entered the building. All senior leaders from the Sena, the NCP and the Congress participated in the protest. However, former CM Uddhav Thackeray, who has decided not to resign from the upper house, didn’t turn up.

The state government placed a supplementary demand of  R25,000 crore from the budget. The extra money will be used for various purposes. However, the money needed to be given to the rain-hit farmers wasn’t part of the demands because the government has enough reserves for disaster management, said finance minister and deputy CM Fadnavis.

Next Story : Maharashtra: IPS reshuffle soon, some reforms on the anvil