Investigation has revealed that after Mohsin Khan, mastermind of the group Ummat-e-Mohammadia, added a new member, Talha would tell the person what to do 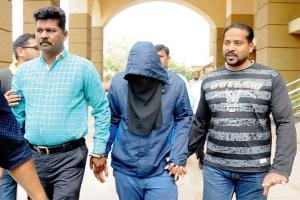 
Talha alias Abubakar Potrekar, recently arrested for allegedly being part of the group with connections to banned organisation IS, appears to be its 'HR manager'. Investigation has revealed that after Mohsin Khan, mastermind of the group Ummat-e-Mohammadia, added a new member, Talha would tell the person what to do.

A management student, not an engineering graduate as reported earlier, he is also a trained scuba diver and encouraged the group members to start physical training to get fit for the forthcoming 'war', said Anti-Terrorism Squad (ATS) sources.

Talha was allegedly part of a larger conspiracy busted by the ATS last week with the arrest of nine youths. The 24-year-old was arrested by ATS Maharashtra from Mumbra. Talha is the 10th accused to be arrested in the alleged plan of chemical attacks in India. "The first meeting of this group took place in August 2018.

After that, Talha advised all the persons in the group to start working out. He told them if they wanted to wage war, every person should be physically fit", said an ATS source. "Talha played the role of second commander in the group," the officer added. "He is smart and very sharp. He used his management skills to make the functioning of the group flawless. He is from a well-off family," added the source.

To understand the network better, ATS officers will interrogate all the accused in front of each other. Officers still have questions about the money trail, locations where the accused purchased chemicals and the role of other members of the group.

Officers also want to know why people from Mumbra were roped in, and specifically what their targets were. Members will be quizzed on their interaction with the ISIS handlers from Syria.

Next Story : Mumbai: No more going round in circles at Bandra Reclamation