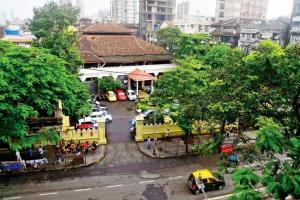 The Parsi community has argued that if underground Metro III corridor were to pass under Wadiaji Atash Behram, it would desecrate sacred fire burning within. File pic


The massive battle put up by the Parsi community to save two of their sacred Atash Behrams from Metro III is now drawing to a close, as final arguments on both sides ended yesterday in the Bombay High Court. While the final judgment is expected soon, the Mumbai Metro Rail Corporation Limited (MMRCL), in their response, has rejected all the eight alternatives proposed by the international expert appointed by the community.

Parsis say 'No'
Emotions ran high in the packed courtroom, as members of the community intently listened to every word spoken by Srihari Aney, senior counsel for MMRCL, especially due to the 'insensitive' comments he had made a couple of weeks ago. When Aney suggested that the sacred fire can be reconsecrated in another area, all the Parsis in the room unanimously yelled "No."

Temples aren't a social evil
Referring to customs like Sati, child marriage and moral policing, Aney stated that if the belief of a community is considered so important, there will be no way to rid the world of social evils. "Does my building the Metro fundamentally violate the belief of Parsis? No one can stop the Parsis from entering the temple and indulging in every religious practice they follow," he said, adding that beliefs have to be based on evidence, and that a line must be drawn between superstitions and beliefs.

Total rejection
Apart from arguments on the constitutional right to freedom of religion, the discussion went on to MMRCL's response to the report filed by the Parsi community's technical expert, Nicola Della Valle, a mining engineer and a tunnelling consultant. Aney said that of the eight alternatives, MMRCL had rejected two of them since they made no sense from an engineering point of view. On the other hand, the Parsi legal team said that none of the alternatives had been rejected in the MMRCL's reply sent on October 1.

F E DeVitre, who was representing the trustees of the Atash Behrams, said that MMRCL had stated that the diagrams provided by their expert was not detailed. "MMRCL says that our alternatives do not meet international standards. But that is just a matter of detailed design. Air ducts, for example, won't be in the conceptual design. But, if they want us to, we can give detailed drawings," he said. Aney pointed out that the alternatives proposed by the experts representing the Parsis were in the form of diagrams that didn't include other aspects of the plan, including the station.

"In the eight diagrams, they have not included the electrical fittings, signalling units, emergency exits, and these are matters of calculation. Their alternatives don't meet the international standards," he said.

Referring to the remaining six alternatives that can be considered, he said the diagrams do not include all the aspects, and the process of preparing the entire plan would take them back to square one. "If we have to prepare the drawings again, it will set us back three years, to when the Metro was first being designed," he added.

'Give us this week'
Countering his point, however, DeVitre pointed out that since MMRCL had agreed to shift the tunnel by 3.5 m, they would have to prepare the diagrams from scratch in any case. "If they agree then they can prepare the diagrams for 7 m, since they have to prepare new plans any way. We can give them a basic design by the end of the week, if they want," he said. Last week, the advocate for the Parsi community had filed a notice of motion, with the prayer of putting the report filed by their tunnelling expert, as well as the MMRCL's response, on record, so that it is considered for the final judgment.

08
No. of alternatives proposed by Parsis

3.5m
Width by which MMRCL had earlier agreed to shift the tunnel

Next Story : Mumbai: Teenager drowns in Banganga during devotees' rituals