Mumbai: Did Dadrawala's presence force Desai to stay away?

The BPP president had earlier sent a mail to the Bhikha Behram well trustees to not invite Dadrawala for a prayer meet, as he was a reformist 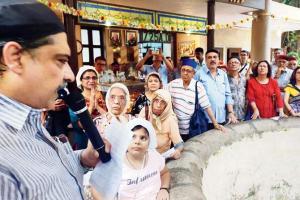 
The rift between BPP trustee Noshir Dadrawala and BPP president Yazdi Desai seems to be widening, all thanks to a so-called "cautionary" email sent out by the latter, asking the Bhikha Behram well trustees to not invite Dadrawala as the chief guest and speaker at their 10th anniversary celebrations of Ava Roj, which takes place once every month. However, the BPP trustee was invited at the event and he was very much present, while Desai stayed away.

Ava Roj or the 'pray together and stay together' event takes place once a month at the Bhikha Behram well in SoBo, when Parsis get together to pray. Confirming that he had sent a mail to the trustees, Desai explained why he was against Dadrawala giving a speech at the event. "He is projecting himself to be an orthodox, which he is not. He is a reformist," said Desai, speaking with mid-day. "I was trying to draw the attention of the trustees (of the well) towards the fact that he is not on our side when it comes to religious matters."

Friday's prayer meet went off smoothly and Dadrawala did give his speech, which was based on the "importance of enlightening the mind by dispelling the darkness of ignorance". Funnily enough, Burjor Antia, chairman of the Bhikha Behram well trust, to whom Desai had written the "cautionary" email to, was present at the event along with BPP trustee Viraf Mehta. Speaking to mid-day, Dadrawala said, "I had attended the first ever prayer gathering 10 years back and am glad that I was there today as well. I am also happy that my fellow BPP trustee Mehta was present at the function." Commenting on Desai's absence, he said, "I don't know why he did this, but to each their own. It is very unfortunate."