Mumbai: Man comes back from the 'dead' before post-mortem

45-year-old wakes up at morgue in Sion Hospital; doctor, who declared him dead by merely checking pulse, shreds death intimation report to save face 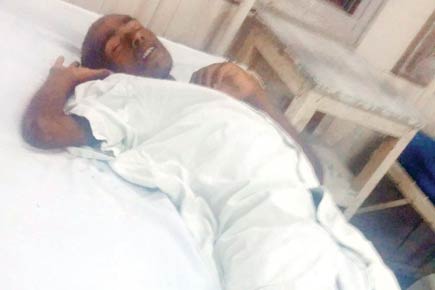 In what could have been a scene from a comedy, a patient at Sion Hospital woke up minutes before his post-mortem, after a doctor had mistakenly declared him dead. The reality is far from funny, however, as the incident points to shocking negligence at the civic hospital. 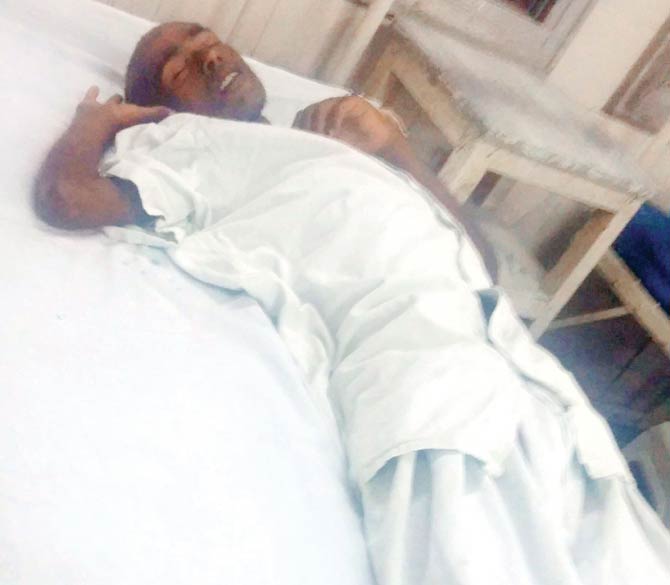 This man, who has not been identified yet, is suffering from malnourishment and an ear infection

What’s worse, according to the police, the doctor at fault immediately destroyed all records of the incident in an effort to cover up his mistake. Around 11.15 am yesterday, the Sion police received a call about a citizen lying unconscious at the ST bus depot at Sulochna Shetty Marg. 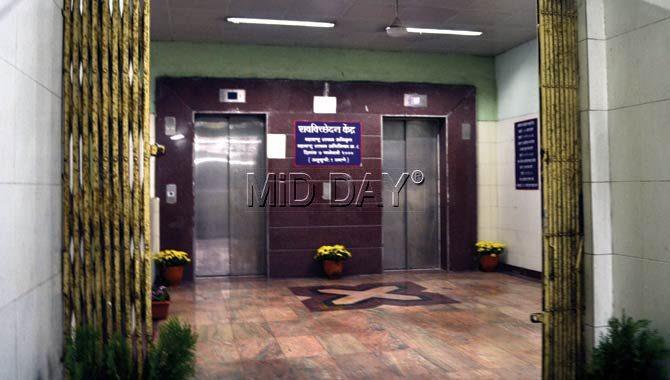 The patient woke up on a gurney right outside the lobby lift in the mortuary, just before he was to be taken for the post-mortem. Pic/Datta Kumbhar

They immediately sent out a patrolling team that arrived at the spot within 10 minutes, picked up the unidentified man and rushed him to Sion Hospital also known as Lokmanya Tilak General (LTG) Hospital. According to sources at the hospital, Chief Medical Officer Dr Rohan Rohekar was on duty at the time and he immediately declared the man dead after checking his pulse.

Hospital procedure requires dead bodies to be held in the casualty ward for two hours for what is called a cooling off period, when there is still a chance of revival. However, Rohekar allegedly told hospital staffers and cops to take the body to the morgue immediately.

A police officer said, “The dead body was covered with a white cloth and the doctor made an entry about the death in the casualty ward diary and a death intimation report was prepared.”

Still breathing
The body was taken to the mortuary on a stretcher, where it was kept near the lift in the lobby. From there, the body was to be taken to the first floor for the post-mortem. But just as morgue staffers Subhash and Surender were about to take the body upstairs, they received a shock: “The dead man was breathing. We saw his stomach moving up and down,” said Subhash.

Insiders at the hospital said that the ‘dead’ man woke up during the ensuing commotion, just as the staffers went to inform the casualty ward about their discovery. “Dr Rohekar rushed to the mortuary. He tore up the death intimation report and even erased the entry that he made in the casualty ward diary. The doctors then referred the patient to the ENT department,” said a staffer at the hospital.

Cops arrive
Around this time, cops from the Sion police station arrived at the hospital to carry out a panchnama of the body and register an Accidental Death Report. “When we reached the post-mortem centre, we were shocked to learn that the dead person was alive and had been sent for treatment,” said an officer.

“Senior Police Inspector Yeshudas Gorde came to the hospital, but the doctors did not let him in and they refused to show us the diary entry about the death. The doctor did not even tell where he had dumped the records he had torn out,” said another cop.

SPI Gorde said, “It is a serious case of negligence by the doctor. We were shocked to find patient was alive after he had been declared dead. We have written to the dean of Sion Hospital, asking him to conduct an inquiry and give us the report. Once the report is out, we can take action. The hospital authorities should take action against the person responsible for this incident.”

However, when mid-day contacted the dean, Dr Suleman Merchant, he said it was not unusual for doctors to miss the pulse of a patient, particularly if the patient was in shock or trauma. This is why the patient is kept in the ward to check whether there is revival.

“We have reprimanded the doctor and have told him that in such cases the body must be kept in the casualty ward for a cooling off period of two hours. This doctor is new to the hospital; he joined us a week ago, and so isn’t familiar with the procedure,” he added. Dr Rohekar could not be reached for comment.

Patient X
While the cops are yet to confirm the identity of the patient, sources said he is around 45 years old. He is currently being treated for an ear infection at the ENT department and is considerably weak due to malnourishment, said hospital sources.