Less than a fortnight after mid-day’s reports about state-run hospitals and colleges including JJ Hospital in Mumbai, running out of medicines, the BMC-run KEM Hospital is facing an acute shortage of basic medicines and non-surgical items. mid-day on Friday found that patients and their kin were told to buy glucose, blood collector tubes, etc. from medical shops.

Asked why doctors were asking patient’s kin to purchase medicines and non-surgical items from outside, they said that’s because the hospital does not have stock. The poor or lower-middle class patients who come with the hope of getting treated for free or at very nominal charges in BMC and government-run hospitals such as KEM, have to bear almost all the expenses.

‘Our priority is our patient’

A resident of Parel, Laxman Goware, 65, suffering from chest pain and high BP was taken to the emergency ward of KEM on Friday noon. His daughter Jaya Goware said, “They don’t even have saline bottles and IV sets. We bought them from outside. It is pathetic that such a big hospital does not have these essential items. We didn’t argue much with them because our priority is our patient.” Another patient, Baban Sawant’s, 55, relative Mukesh Jadhav said, “My uncle has been paralysed on the right side of the body. We brought him from Ambernath to KEM hospital on Friday at around 3 am. But here doctors asked me to buy saline bottles, IV set, medicines, and tubes to collect blood. He does not earn and our family has to bear the expenses.” 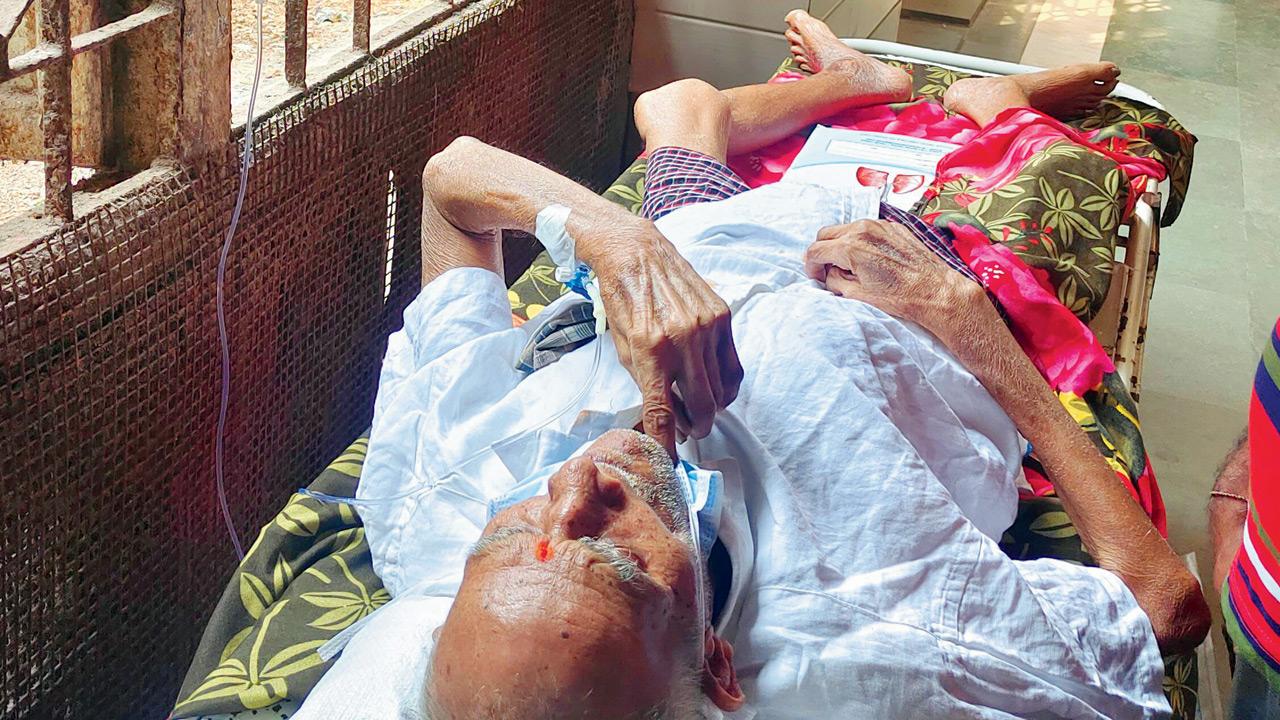 Laxman Sable, whose son Hanumant also said he had to buy saline and IV set

Hanumant Sable, son of another patient, Laxman Sable, said, “My father is a TB patient. The doctor asked us to bring saline bottles and IV set from outside.” A doctor who did not want to be named said, “If there is saline, there is no tube. If there is a tube, then there are no gloves. If there are gloves, then there is no medicine. This is what has been happening for the past two months. This is hampering patient and doctor relationships.”

When asked about the issue, a senior official from KEM hospital said they have been buying medicines, “The schedule list has not been prepared by the Central Purchase Department (CPD). Till the COVID-19 pandemic, there was little demand for non-COVID medicines but now it has increased. For the past two months, the hospital administration has been purchasing the medicine and non-surgical items on local level. The dean of the hospital has the right to buy medicines worth R3 lakh at his level and currently we are doing that.”

KEM Dean Dr Sangeeta Rawat was not available for comment. Ramakant Biradar, deputy municipal commissioner, CPD, said, “The question of shortage of medicines in hospitals does not arise as the dean and heads of departments have been given the right to make local purchases in case of shortage. We have a schedule and our job is to appoint an agency for the purchase of medicines. After the appointment, the hospital administration is told that they have to take medicine from the concerned agency.”

However, Additional Municipal Commissioner Suresh Kakani admitted there was a shortage. He said, “It’s a temporary shortage. Hospitals have the authority to buy on the local level. I will check where the delay has happened.”

Next Story : Mumbai: Summer’s here, but not enough pools to dip in