As the civic body gets ready to raze dilapidated buildings, residents plead for state intervention to help redevelop the area 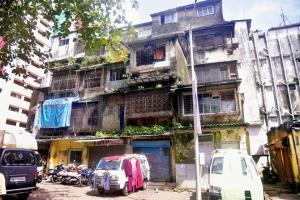 Punjabi Colony was built in 1950, and 1,200 flats were spread over 25 buildings. Pic/Pradeep Dhivar


The Punjabi colony at Guru Teg Bahadur Nagar (GTB), which is more than 70 years old and has been home to Sikh and Punjabi refugees who came from Pakistan shortly after Independence, might be on its last legs. Post the Govandi building collapse incident, the BMC has started rigorous action to vacate all dilapidated buildings in the city. The plan for demolition is ongoing and execution will start in October. But, residents are pleading for government intervention, as they haven't found any solution for the redevelopment or alternate accommodation.

All the 25 buildings of Punjabi Colony are in a dilapidated condition and the BMC had started sending evacuation notices to these buildings almost two decades ago in 1999. But after all these years of court cases, agitation and redevelopment process, the BMC has started disconnecting water and electricity. It has already cut connections of 14 buildings. "We plan to cut the connection of all the remaining buildings over the next week, as they are dilapidated, and we cannot take any risk. The demolition process of buildings will start in October," said Gajanan Bellale, assistant commissioner of F North ward consisting Wadala and Sion. While the residents also do not feel safe staying in these buildings, and many of them have already shifted, the main issue of redevelopment and alternate accommodation remains unresolved.

The buildings in Punjabi Colony at Guru Teg Bahadur Nagar had been constructed before 1950 on the 12-acre land. While the structures fell apart over the years, development could not be done as the land belonged to the President of India. "The collector has given them a letter of ownership. Now, it depends on them how to redevelop a property. Neither BMC, nor the Collector office, is responsible for alternate accommodation," said one of the officials of the BMC.

Mithilesh Sinh, resident of building number 5, said, "While talks are going on with the redevelopers, no one has been finalised yet. People are not getting alternate accommodation, or even rent."

Next Story : Here's how schools in Mumbai are gearing up for unlock amid COVID-19