Residents, local police say contractor built the speed breaker just near a sharp turn, creating a death trap; removed only after a life was lost 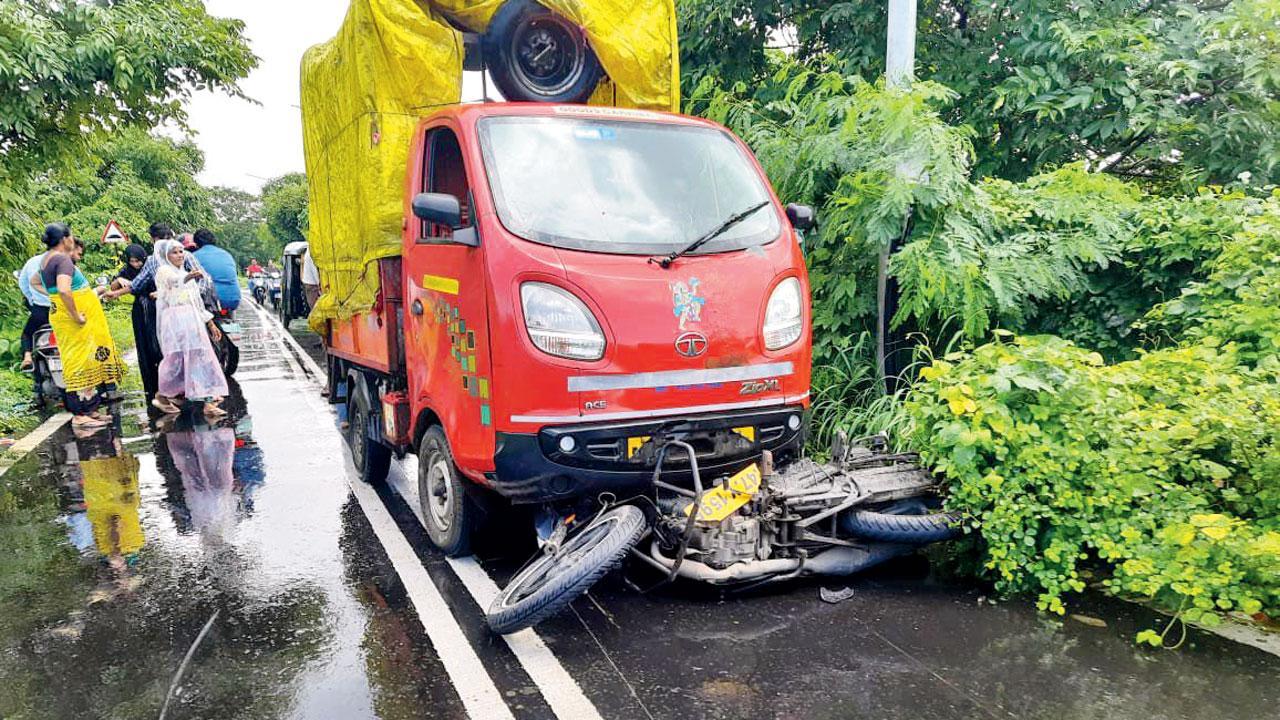 The bike that skidded and crashed near the speed breaker a few days back. The couple came under the mini truck, but are out of danger now, say locals


A deadly speed breaker built on the Gorai Jetty road 15 days ago claimed the life of the youth who died on Monday, said the locals. The contractor, who ignored numerous complaints from the locals, removed it only after the fatal accident. They blame the BMC as well for ignoring their complaints.

The 2-km stretch from Gorai Jetty to T-Junction was built four months back, and mid-day in July highlighted  locals’ concerns about the slipperiness of the road. Hundreds of vehicles have skid on the road since. According to police records, on an average 1-2 vehicles skid on this stretch daily.

The speed breaker was built 50 metres ahead of a turn on the road, people in Gorai and the local police said when a mid-day team visited the site on Friday. A speed breaker is meant for the safety of the people, but this became a death trap as the contractor built it in the wrong place, they said. 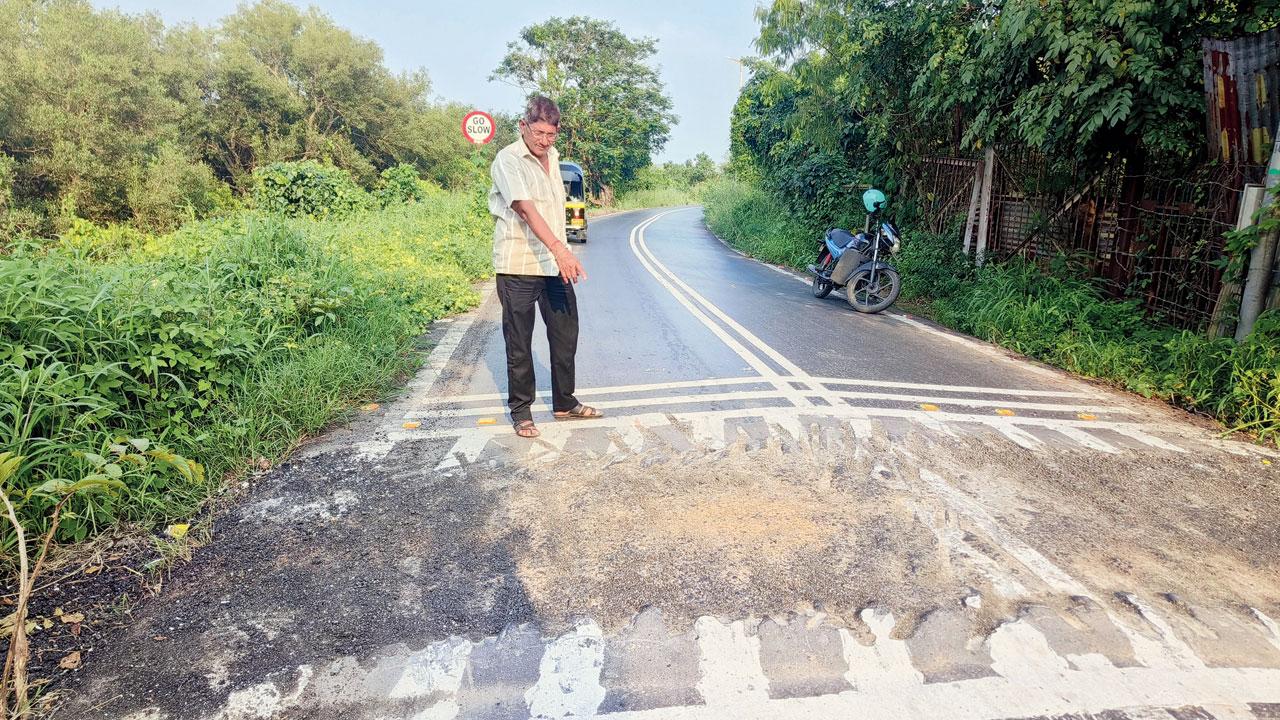 Vishnu Patel, the auto driver who rescued the youths in Monday’s accident, points to the section where speed breaker was built

A senior officer from Gorai police station said, “This road was constructed a few [about four] months ago, but it’s deadly. This road is uneven and slippery. We get information about skidding incidents daily.

The now-removed speed breaker was built in the wrong place and it is where Ganesh Chavan died [on Monday]. Locals had complained to the road contractor about the dangerous speed breaker multiple times, but he removed it only after the fatal accident.”

Chavan, a resident of Poisar in Kandivli West, died when his bike skidded on the stretch. His friends Shubham and Siddhesh Rane survived. “In the police statement, Rane told us that they couldn’t see the speed breaker. It appeared suddenly, he said,” the officer added.

Vishnu Patel, the local auto driver who rescued Rane and Shubham, told mid-day, “The contractor did not remove the speed breaker despite numerous complaints. He did so only after the fatal accident to escape from taking responsibility. This road is releasing oil and is slippery. The BMC has now installed a signboard saying: wet surface please go slow.” 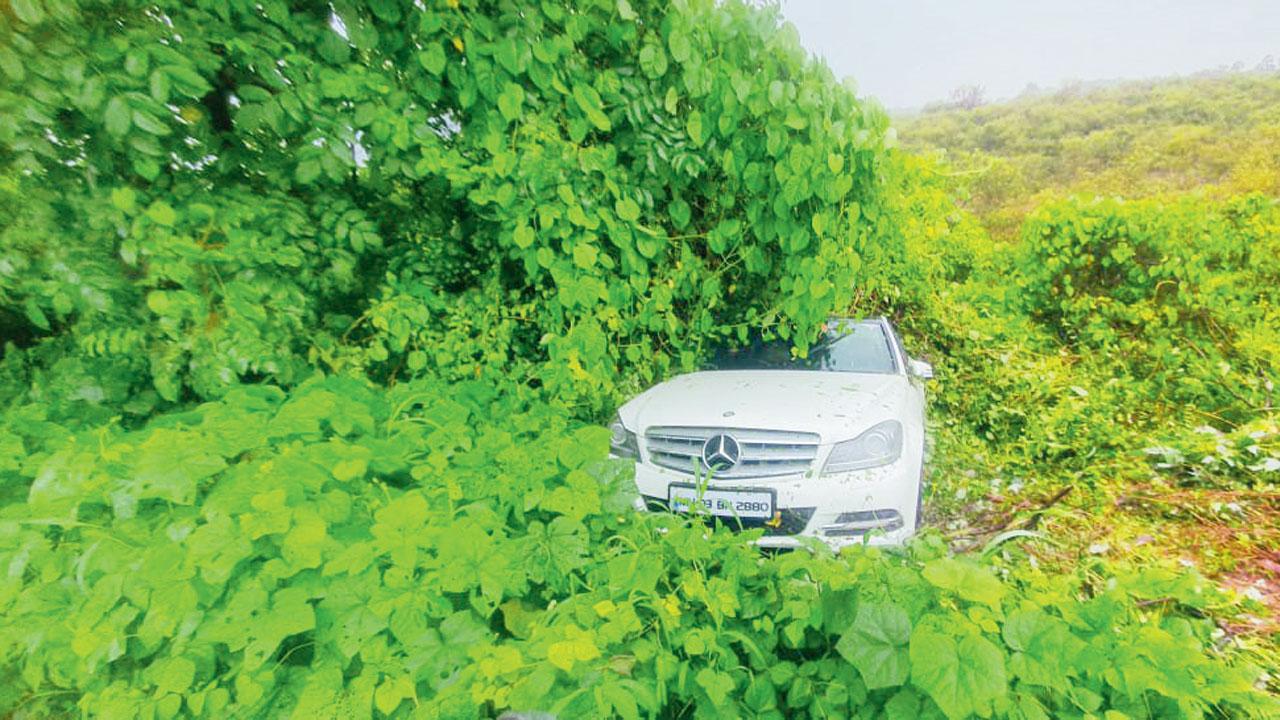 A Mercedes skidded after crossing the speed breaker and fell into the creek. Pics/Shirish Vaktnia

Another police officer said, “So far, more than 200 people have been in an accident at this spot and 70-80 of them have been seriously injured. We register cases of accidents, but those were incidents of vehicles skidding.”

3 had brush with death

On September 16, a Mercedes skidded on this stretch and fell into the creek, said police. Rupesh John Aitolea, a resident of Gorai village, told mid-day, “I was returning home after dropping my daughter to school around 11 am. After crossing the speed breaker, I lost control of my car, which skidded and fell into the creek. Luckily, I didn't sustain any injuries. And thank god, my daughter was not in the car.”

“I was driving at no more than 30-50 kmph. I called the road contractor to the spot. Instead of taking responsibility and helping, the contractor alleged that I must be speeding or drunk. I have complained to the Gorai police about the accident and the bad road,” he said. Two days back, a couple’s bike skidded on the spot and a mini truck hit them. They were hospitalised and are out of danger, a local said.

15
No of days back the speed breaker was built