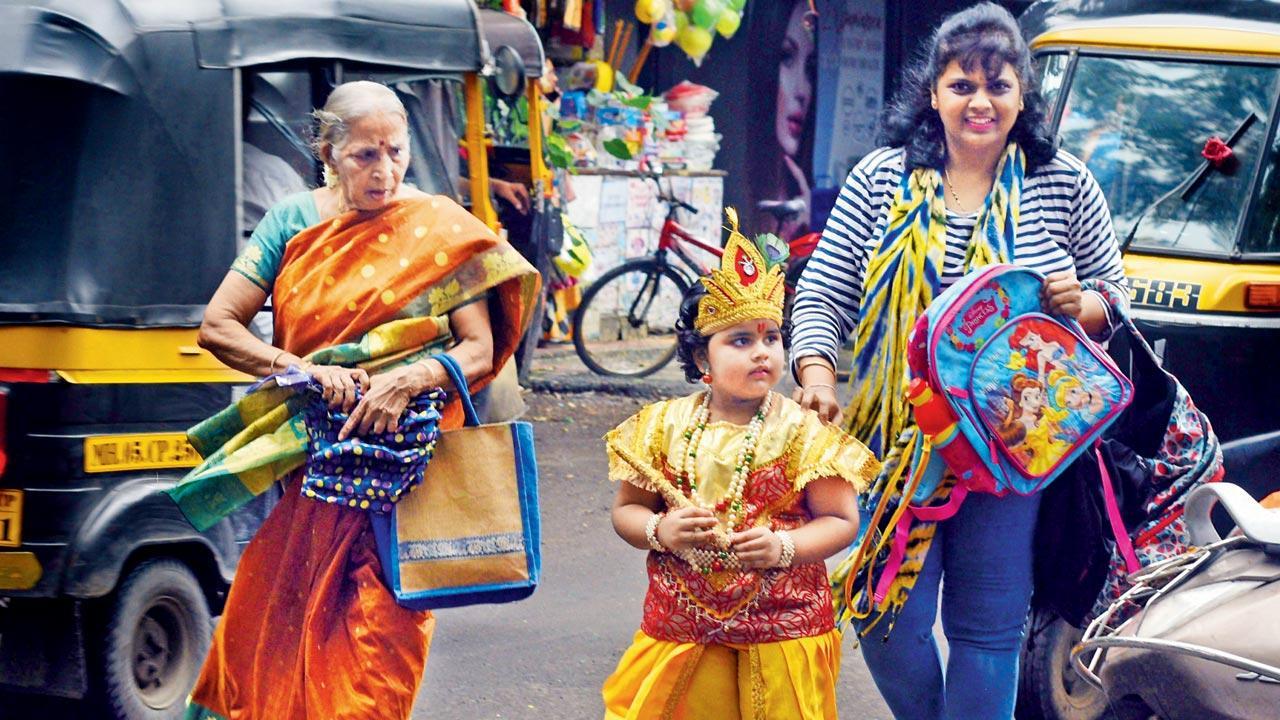 
Krishna in a traffic Jam

With the city getting into the mood to celebrate Janmashthami, a student dressed up as lord Krishna, crosses the road at Patkar Nagar in Dombivli.

Pundole’s fine art auction on September 13 is one for the ages. Gallerist Dadiba Pundole remarked that of the 86 lots on sale, the largest collections are those of late Mukund Lath and Mumbai’s Dilip De. Apart from a special Ganesh Pyne in the Lath collection, he said, “There are some rare early Bengal works by Gaganendranath, Rathindranath and Abanindranath Tagore, as well as a few Jamini Roys in the De collection.” Another storied work in the collection is a Ghashiram Kotwal canvas by MF Husain. Pundole described the story of how the choreography of Vijay Tendulkar’s iconoclastic play inspired the artist to create a series of watercolours. The Ballard Estate auction house will certainly be art central come September. 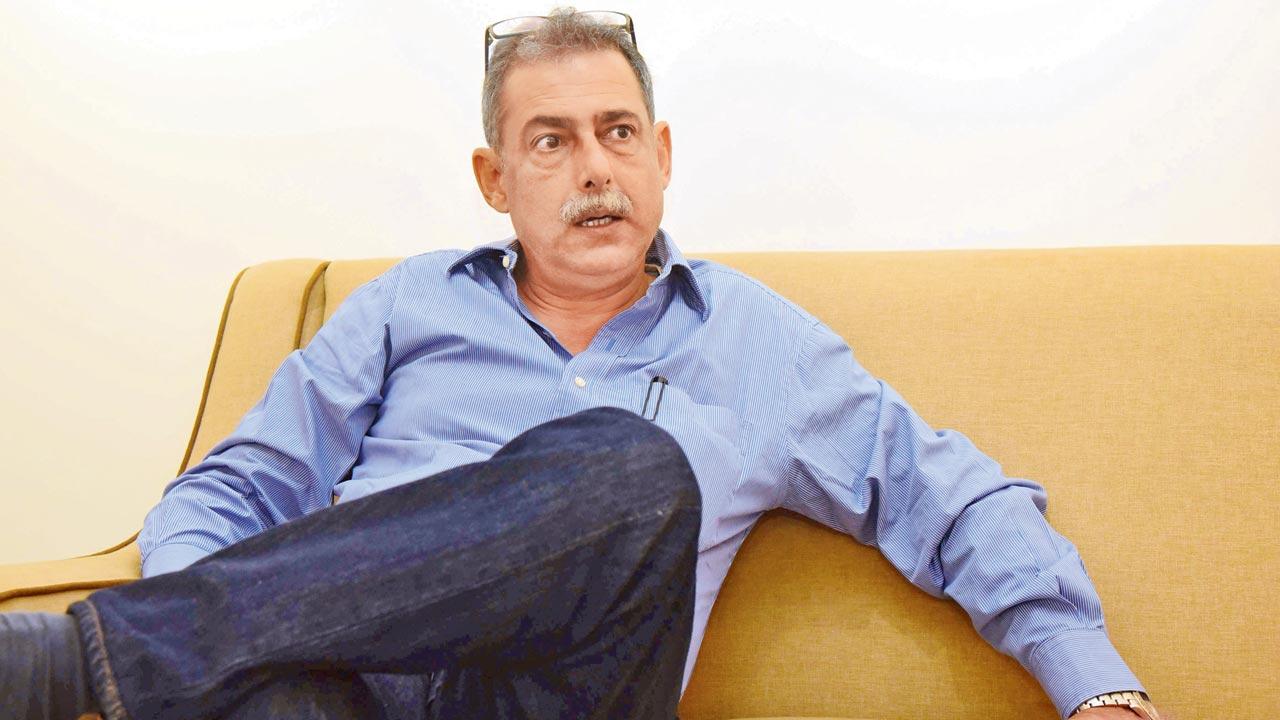 Chai on the wall 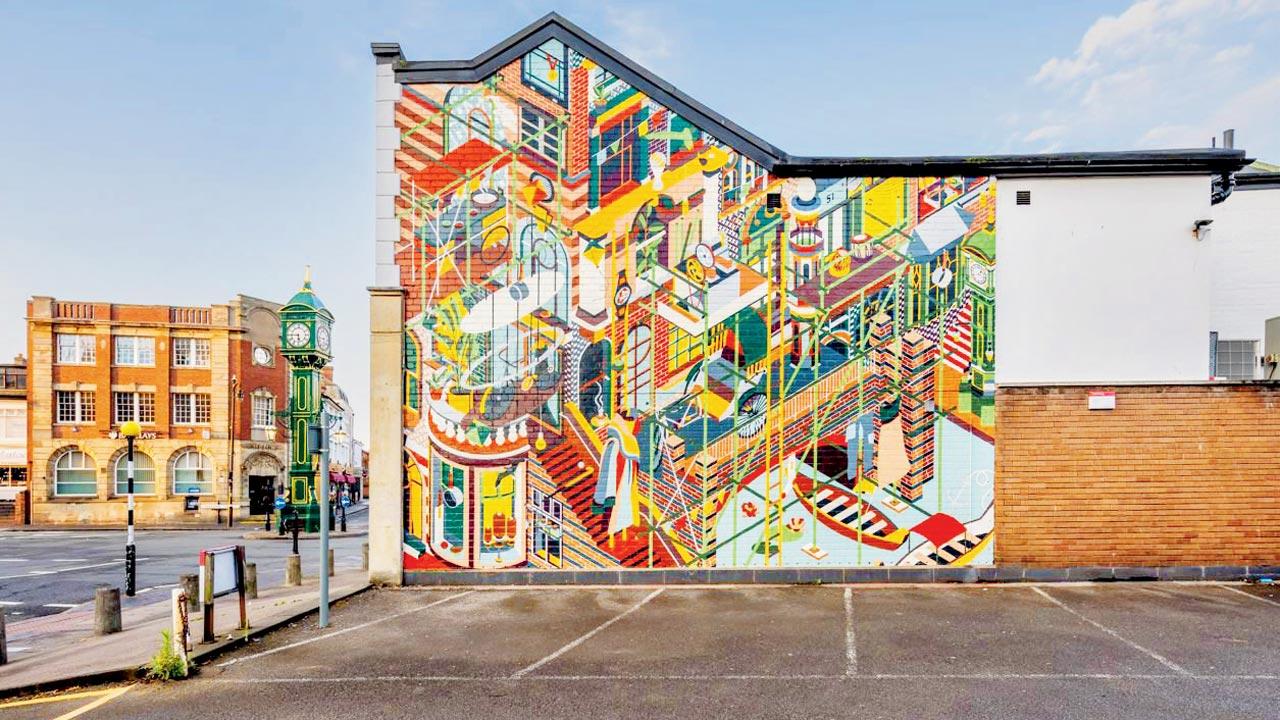 Take a moment to soak in Aashti Miller’s highly detailed mural located at Jewellery Quarter, Birmingham, in the United Kingdom. Miller is an architect, designer, illustrator and daughter to veteran Mumbai artist Brinda Chudasama Miller. It is part of a project titled Paint Spectrum Birmingham fronted by Mural Republic and Birmingham City Council for the Commonwealth Games held earlier this month.  Titled Saudade, the mural features elements from the city’s historical and popular locations. It also depicts elements such as chai, a hockey stick and birds from India, Pakistan and Bangladesh considering the city’s large South Asian population. “Seeing your work on a large scale is always amazing,” Miller told us. 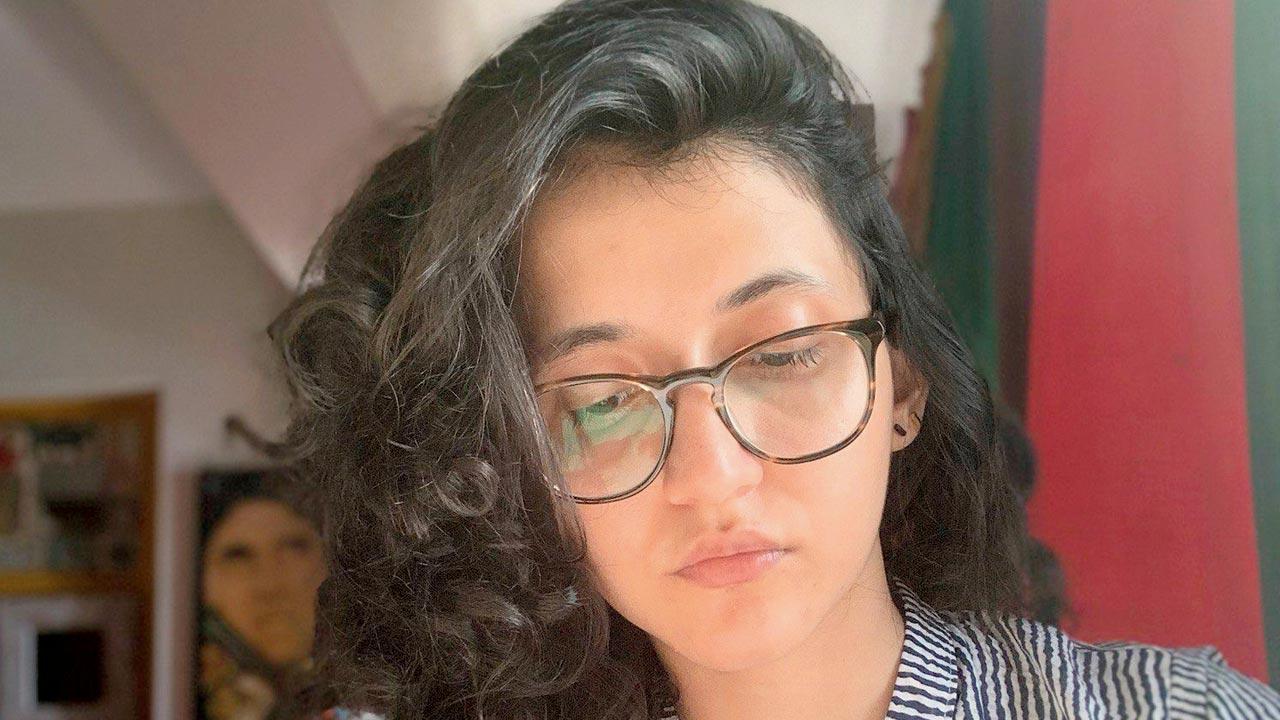 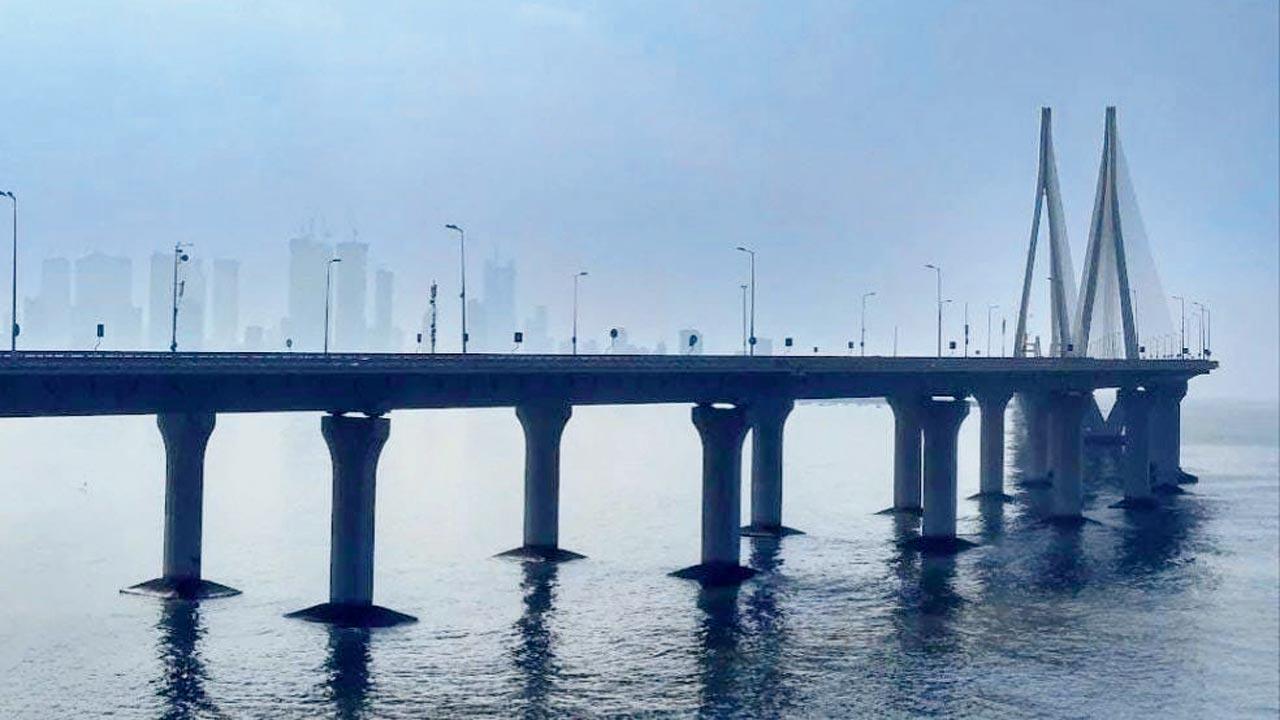 We all have photos of clouds on our phones. However, Bandra girl Joanna Fernandes recently created an Instagram page dedicated to these candyfloss clouds. She started a worldwide photo collection of the sky on her new Instagram page, @skylinegalore, which was launched last week, and includes skies from Australia, Oman, Pondicherry, and, of course, Bandra. The page calls for entries of clouds and skies from all over the world. She told us, “I’ve always wanted to start an Instagram page and dedicate time to working on it every day. With this page, I believe I am getting a chance to connect with people across the globe and learn about new places, too.” 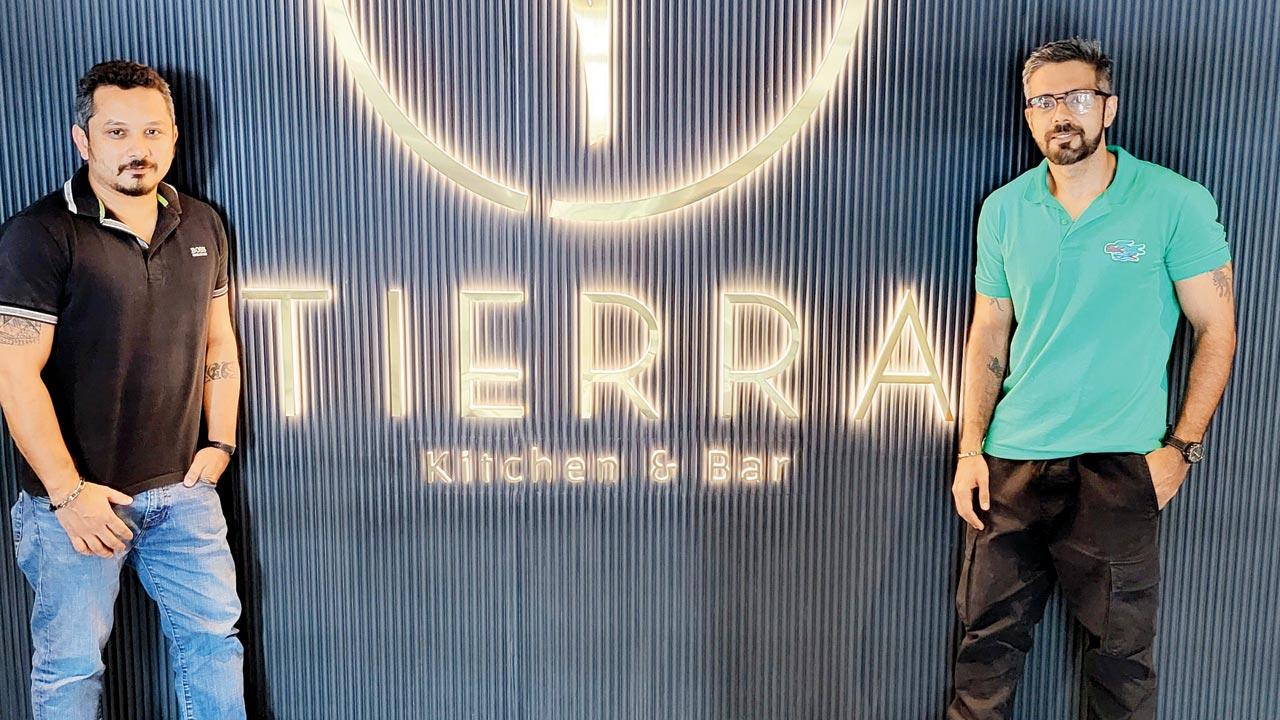 The past few years have marked the rise of conscious eating in the city, with more offerings for vegetarians and vegans on the table than ever before. To cater to this growing crowd of conscious gourmands, ex-The Wine Rack chef and food curator Himanil Khosla  has joined hands with restaurateur Ankit Bhalaria to create Tierra, a vegetarian-vegan restaurant in a plush Worli mall. Of Spanish origin, the name translates to mother earth, Khosla informed us in the midst of last-minute preparations for the hangout that opens doors next week. “We’re trying to source produce mindfully. My philosophy has always been cuisine without borders,” said Khosla about the menu that boasts of delicacies across the world. “In the day, it will offer a contemporary minimalist ambience; by night, the energy will change completely. The bar focuses on earthy, botanicals-infused cocktails.”