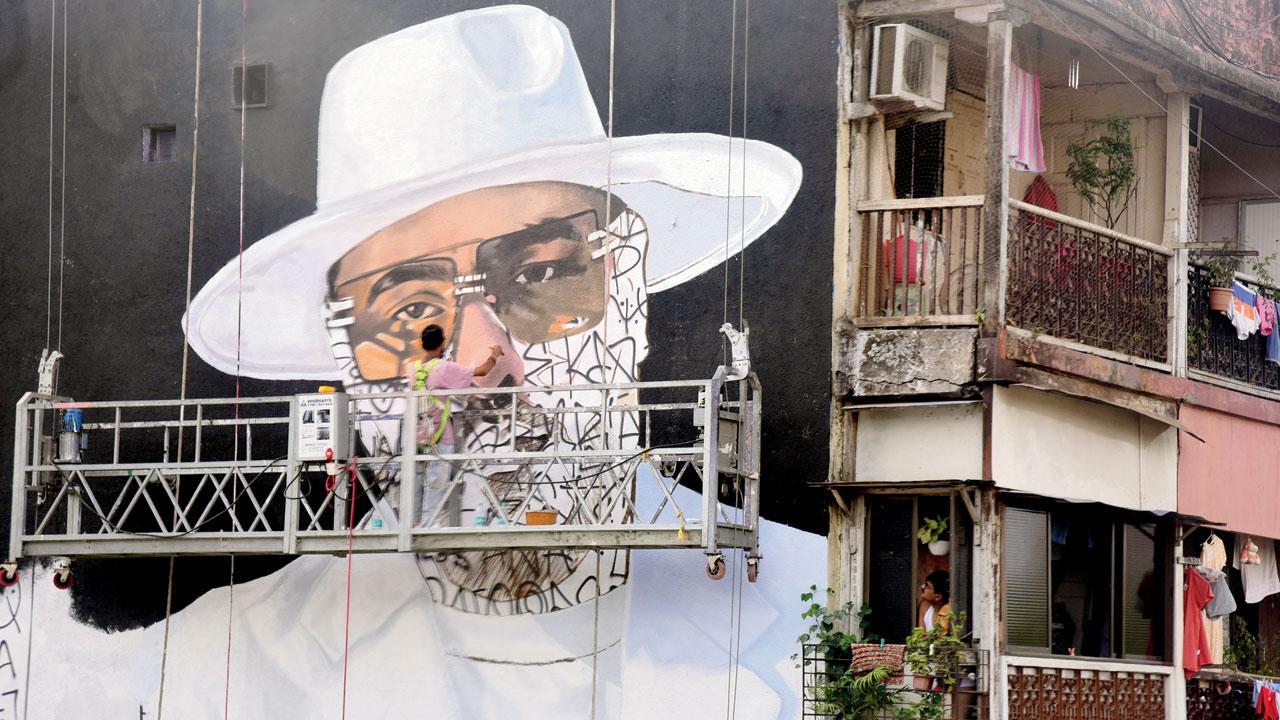 A mural artist is seen working on a gigantic artwork in Lalbaug. 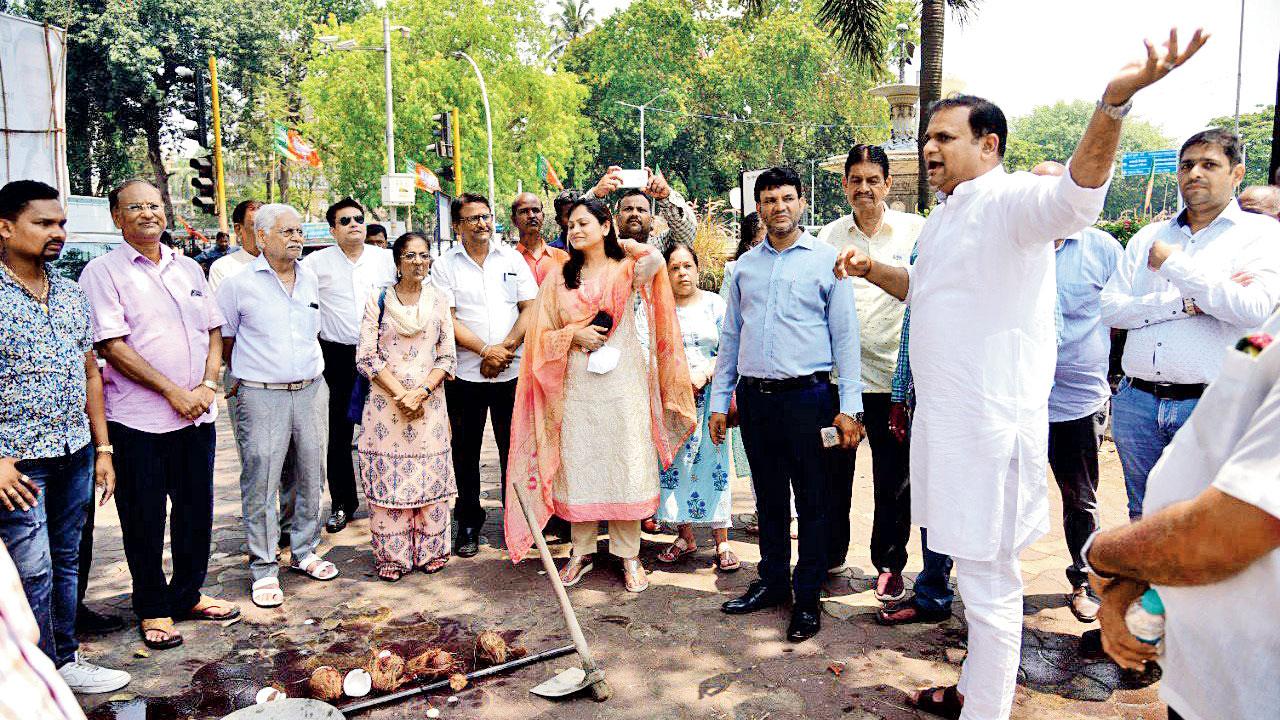 On April 7 this year, BJP corporator Harshita Narwekar led a team into the Regal precinct parking lot at Colaba. Narwekar announced the formal opening of the beautification project of the Regal and Churchgate junction. “The project is the brainchild of our MLA Rahul S Narwekar and the funds were sanctioned by then Chief Minister Devendra Fadnavis,” said Narwekar. A month later, in early May, a tweet appeared by Shiv Sena leader Aaditya Thackeray about, “commencing revamping work on Fort Heritage precinct around Dr Shyama Prasad Mukherjee Chowk, near Regal cinema.” At the time of BJP’s inauguration, Narwekar had warned, “remember this is our [BJP] initiative, even if somebody else tries to take the credit”. When asked about this tweet, she said, “this is typical of the Shiv Sena.” Meanwhile, Pervez Cooper, Colaba local and Shiv Sena member said, “It is Aaditya Thackeray’s initiative. It is typical of some to bring down those who are doing good work.” Ouch. The frenemies are on fire! 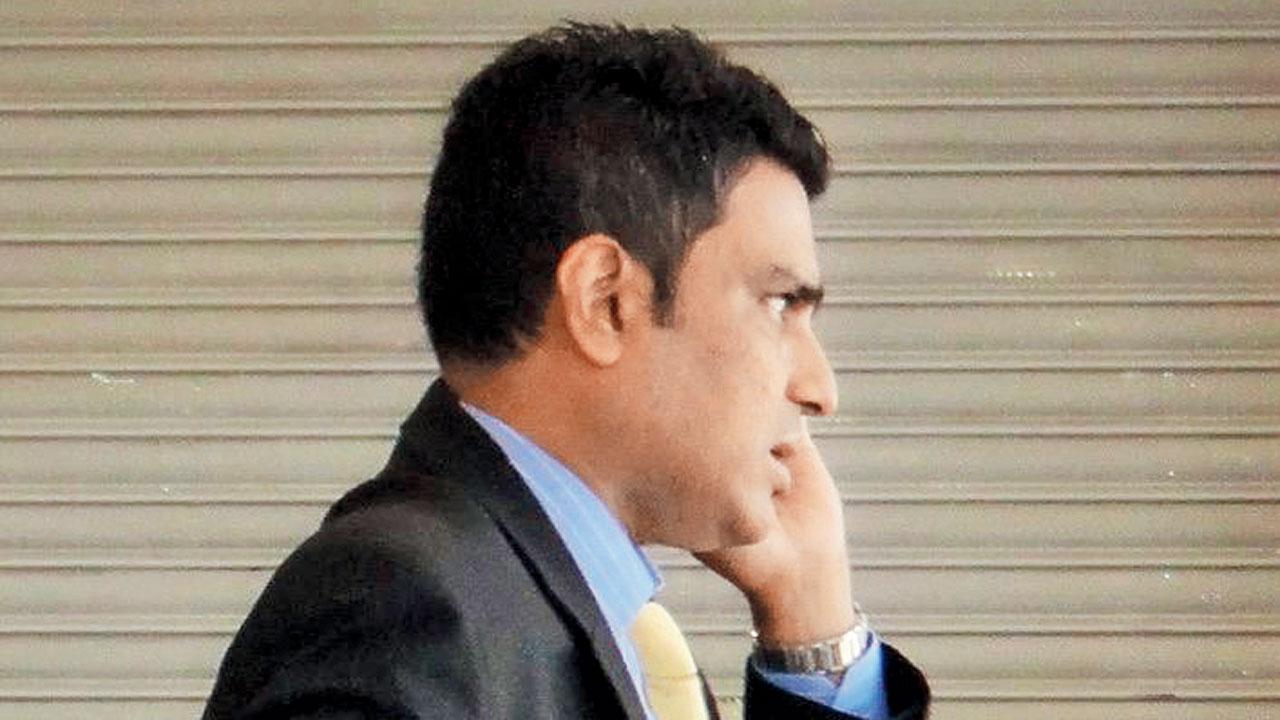 Sanjay Manjrekar knows more than anybody else that he will be slammed no matter how sound his views are on Twitter. Yet, he plays that risky shot as it were and speaks his mind. He did so in connection with Virat Kohli’s dismissal for seven in Friday’s IPL Qualifier 2. Manjrekar wrote: “Virat wanting to be on the front foot no matter what is not helping his cause. Mental toughness takes you far sure, but technical issues cannot be ignored completely. Crunch game... front foot to a short of length bouncing ball cost him his wicket again.” Now, some may question the number of limited overs runs Manjrekar has scored as compared to Kohli. That’s a no contest, but Manjrekar knows technique. At one time he was one of the most technically sound batsmen in the Indian team. Trollers, you need reminding. Play on, Manji boy.

A song for the voiceless 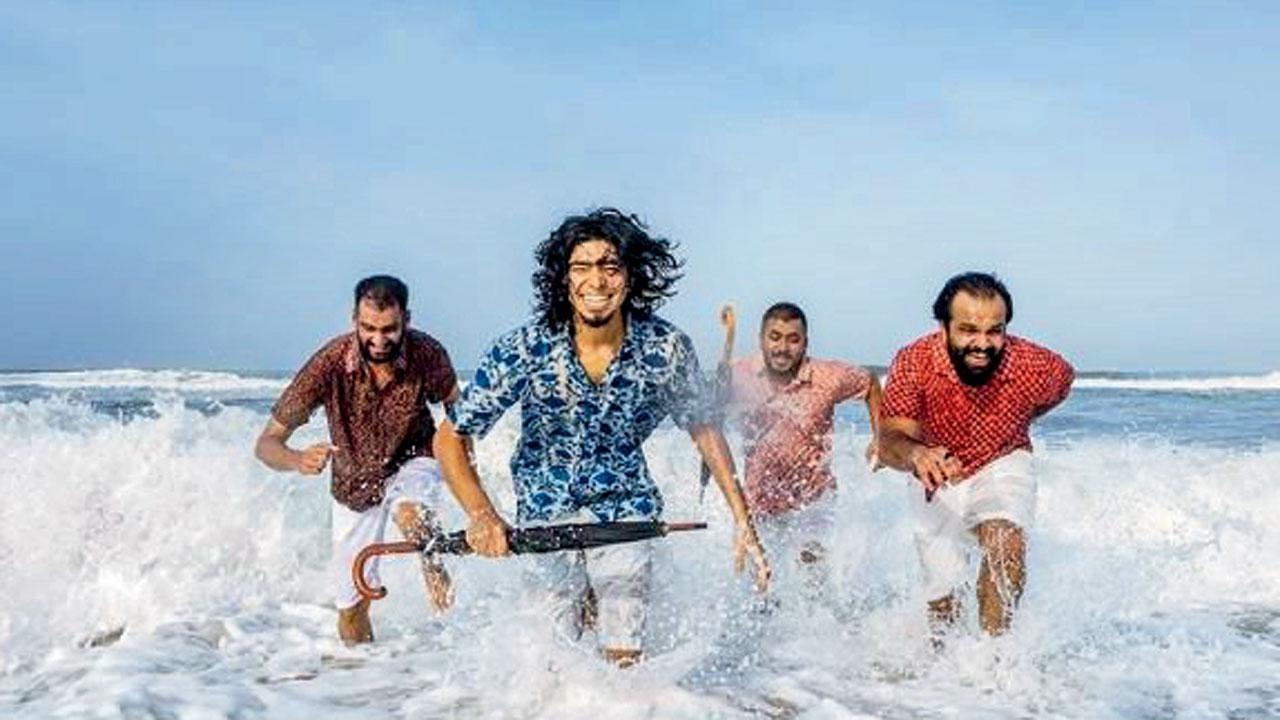 When Chai Met Toast (WCMT), the popular Kochi-based indie folk band, has created an anthem to unify every animal loving human being. This song was a part of the #Naamkaran movement by  Youth Organisation in Defence of Animals (YODA), an animal welfare trust in Mumbai and Haryana. In the movement, animal lovers lend their names to shelter animals and the ones who are homeless and deserve a family. The video for Humein Jeena Saath Hai Yahaan, the song sung by WCMT features media personalities like Bhumi Pednekar, Riteish Deshmukh, Genelia D’Souza, Barkha Singh, Amrita Puri, among others. The band sticks to their style of multi-lingual music with English as well as Hindi lyrics. “With this, we hope to increase awareness, and reduce the taboo of adopting shelter animals. It’s an earnest call to take action to protect, respect and care for our community animals across the gullies of India,” YODA mentioned in their Instagram post. 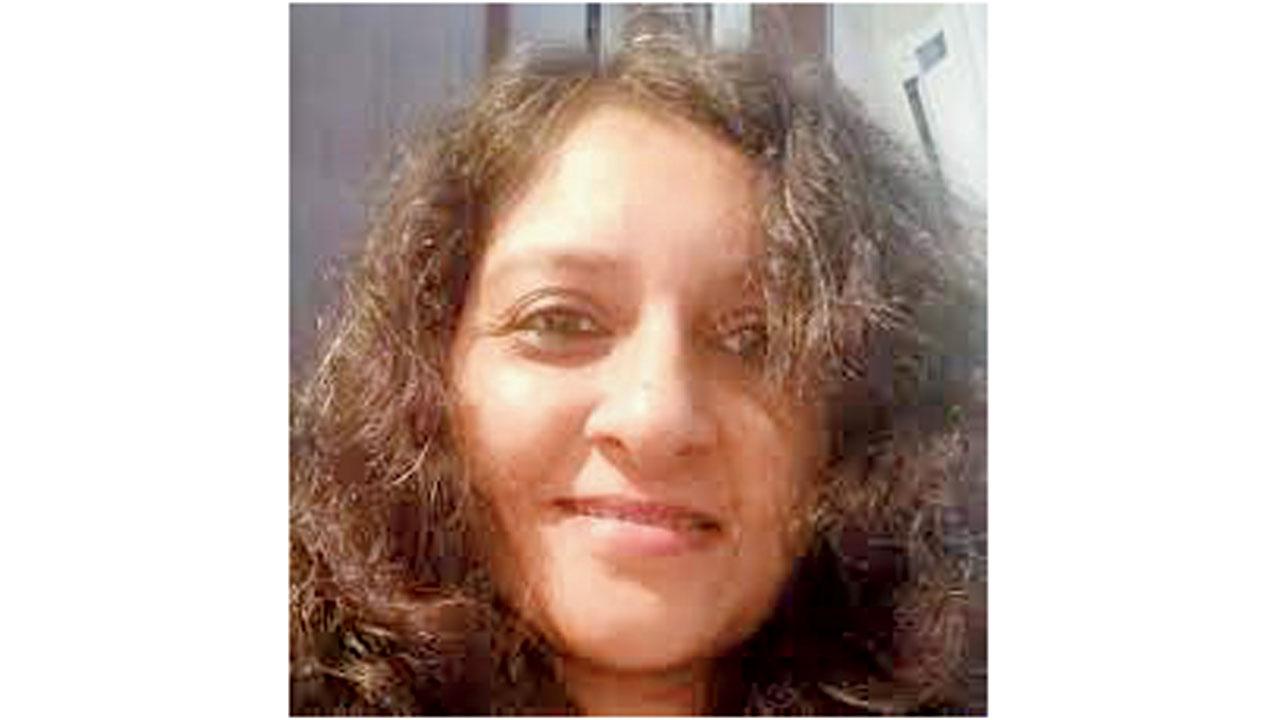 Westland Books has finally moved on from Amazon. The Indian publishing house had witnessed a huge upset early in 2022, when the retail giant had announced its closure. Starting next month, Westland will begin afresh with publishing platform Pratilipi. “It’s been five years of building new imprints and titles with authors we believe in, and we hope to continue publishing with a similar focus. We’re looking forward to creating innovative and meaningful relationships for our writers across platforms, including translations, comics and audio, with our colleagues at Pratilipi,” said publisher Karthika VK. Westland will start by publishing existing titles of authors who’ve chosen to stay with them, and launch with a new catalogue by September. Some of the star authors of Westland, including Ashwin Sanghi and Amish Tripathi, who recently signed up with a new publisher, will be conspicuous by their absence.

What is the old guard up to? 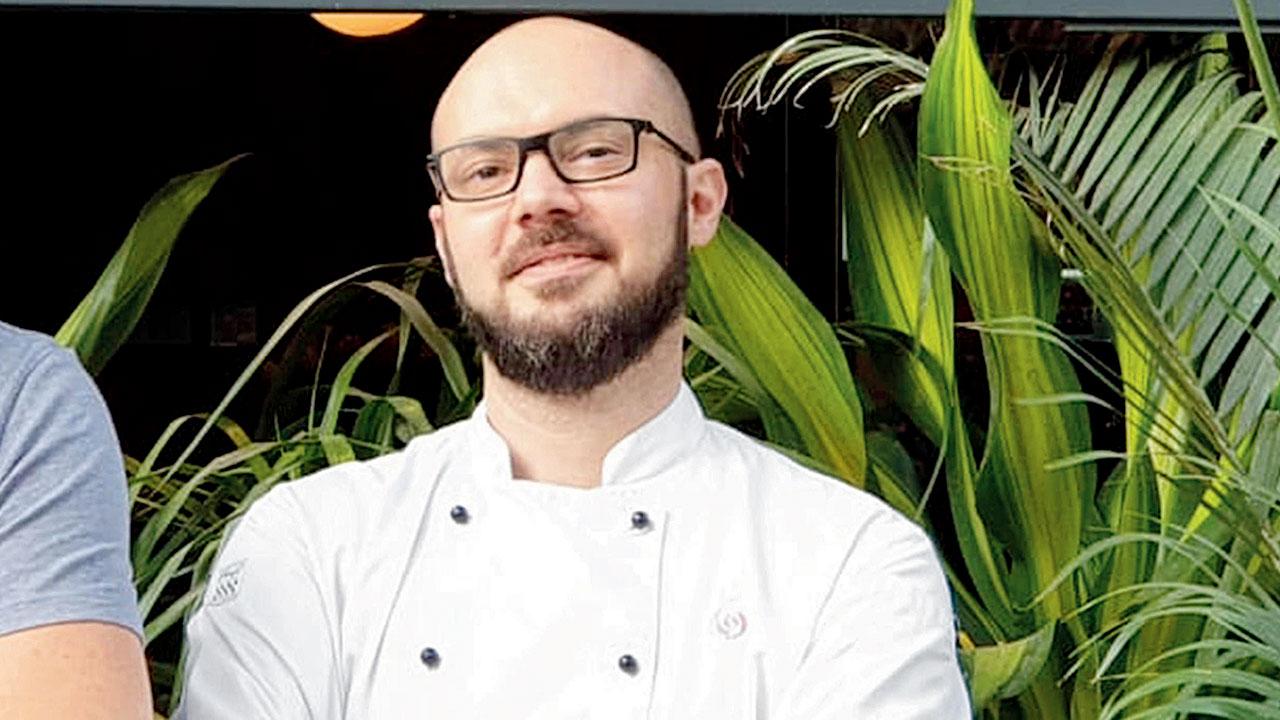 We told you about Slink & Bardot reopening its doors. While we are happy with Vicky Singh joining hands with Riyaaz Amlani and giving it a new lease of life, we couldn’t help but wonder what Nick Harrison and Chef Alexis Gielbaum, the French duo running the restaurant since its inception in 2017 until it shut down during the pandemic, has been up to? An industry insider told us that while Harrison got hitched and moved to Canada for good, Gielbaum was in Goa until recently. When we reached out to the chef, he confirmed this, saying that he was in Goa to help open a French restaurant, but has now moved back to France. Unless of course, a new project calls him!

Next Story : BMC to act against big stores, showrooms on main roads with no Marathi signboards