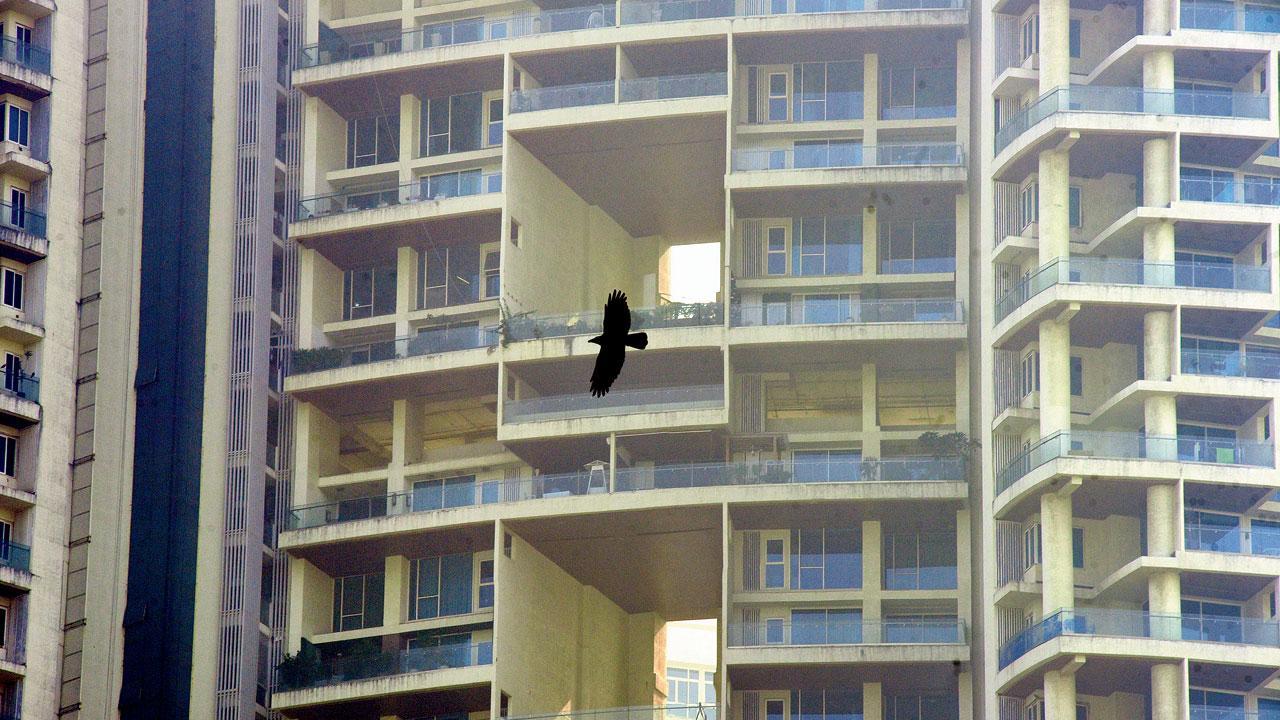 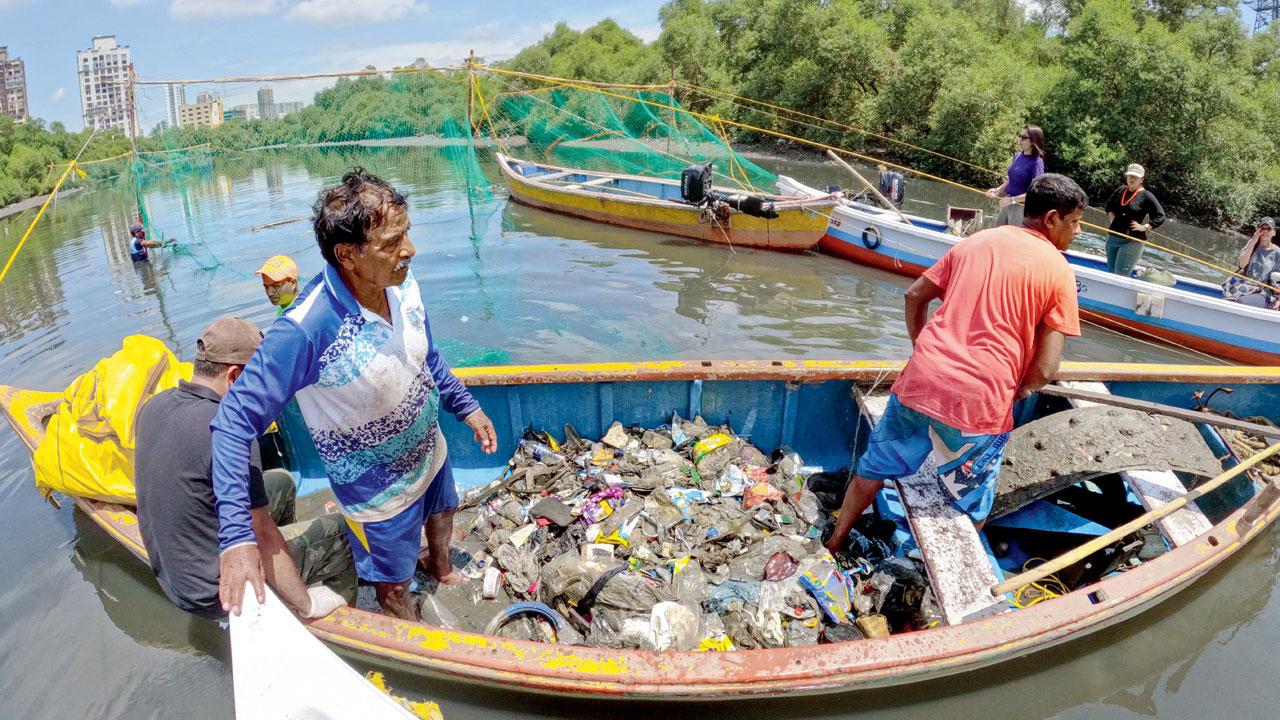 Did you know that the Versova nullah is actually called the Kavtya Khadi? The word nullah throws up images of water pollution, an association that has furthered the degradation of this creek, which is integral to the Koli community thriving on its waters. Bombay61 Studio, an urban solutions think tank working in the area for over eight years, found that most often, fishermen end up trapping more waste instead of fish while fishing in the khadi. After multiple conversations with the community, the studio along with the Tapestry research project and Ministry of Mumbai’s Magic (MMM) started working on #NewCatchInTown — a solution created in alliance with the fisherfolk to remove as much as 5,000 kg trash every month from the city’s creeks. Jai and Ketaki Bhadgaonkar, co-founders of Bombay 61, told us they’ve devised a fishing net installation that they set up in the khadi, inspired by the community’s traditional dol nets. It collected 500 kg of waste in three days. “The size of the net can be modified as per the width of the nullah. We intend to propose the mechanism to the BMC,” said Ketaki, while Jai added, “It’s important to sort and manage the waste collected that requires manpower and infrastructure and we’re looking into it.” Harpreet Bhullar, programme manager, climate lab and MMM Campaign, said, “We want the youth to support this pilot and start a conversation on how communities which are vulnerable can be engaged towards creating innovative indigenous solutions.” 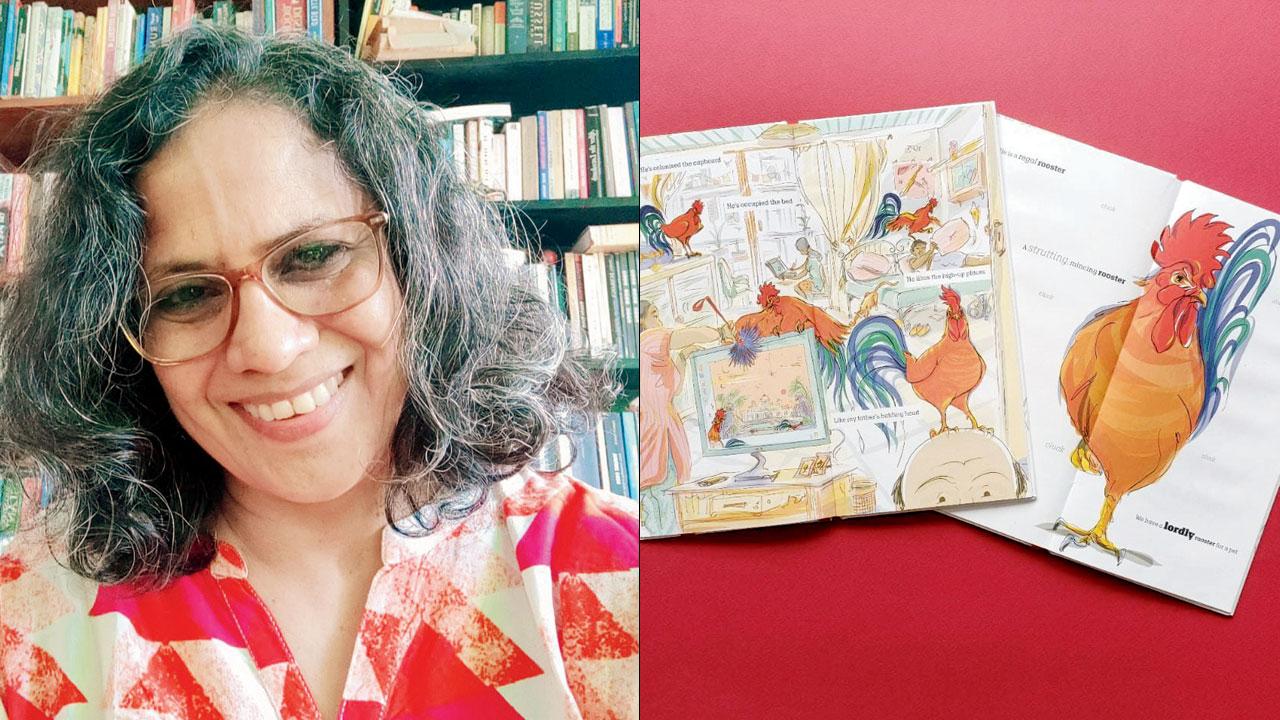 Towards the end of last year, this paper had reported about a documentary on an unlikely happening — a rooster living in a two-bedroom Mumbai apartment with four human occupants. Tungrus, Rishi Chandna’s short film, caught children’s writer Anushka Ravishankar’s eye. And now, she is releasing a book inspired by the quirky tale. “Animal antics and the range of human interactions they forge have always thrilled me,” she said. The title, A Rooster for a Pet (Tara Books) follows the course of the film but speaks from a child’s viewpoint. “It carries no messaging; I wanted to share an interesting situation,” the author told us. The book that carries illustrations by Emanuele Scanziani is set to release in the first week of September. 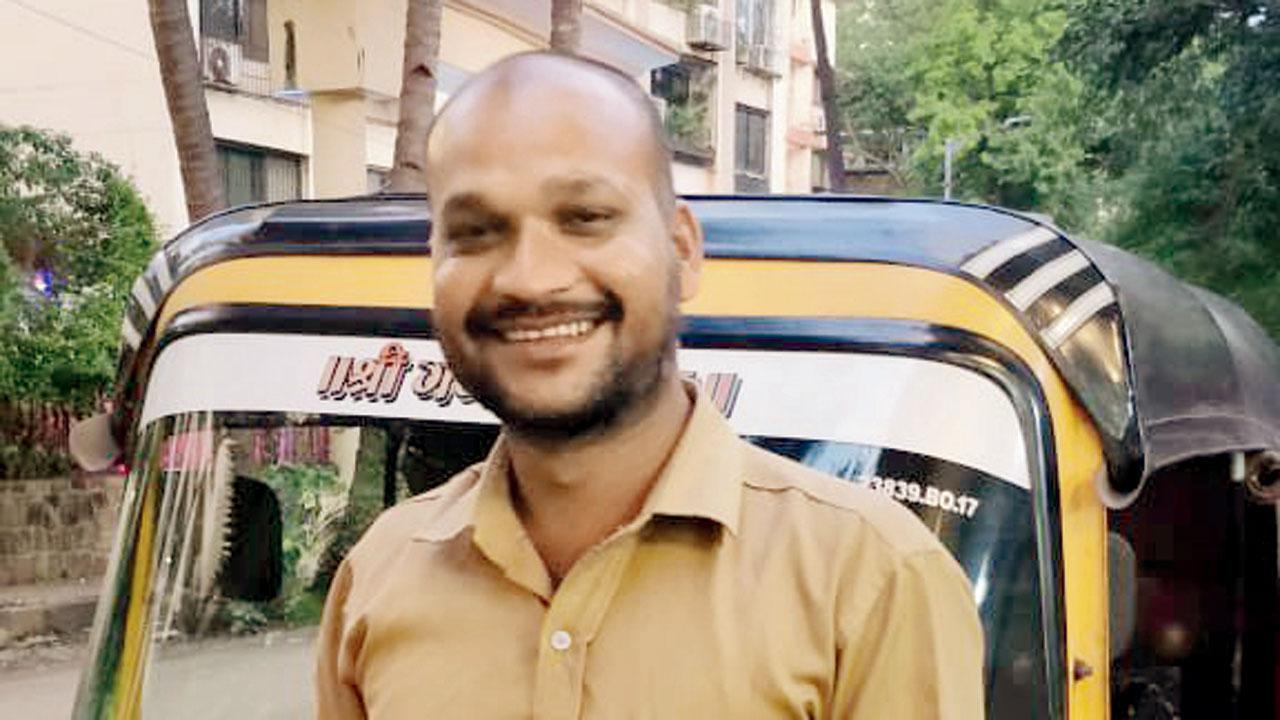 We book MH number so-and-so, we don’t hail. When our ride arrives, they call on a standard number for the platform ending in double one always. Then when we ascend, we don’t mention the destination, only the pin, and the driver follows directions on a map on his phone. This routine has been established since long. Recently, this diarist hailed a rickshaw without middlemen applications. “Check Google Maps,” said Dharmendar Singh (in pic), 27, from Uttar Pradesh, and requested for the estimated travel time. When we shared that it would take 15 minutes, he replied, “Three kilometres.” We checked, and he was right. The distance of the upcoming turns was estimated correctly, too. But how? “I have gained judgement from doing this job every day,” he laughed. We did not continue the game, but carried on with the engaging chitchat. 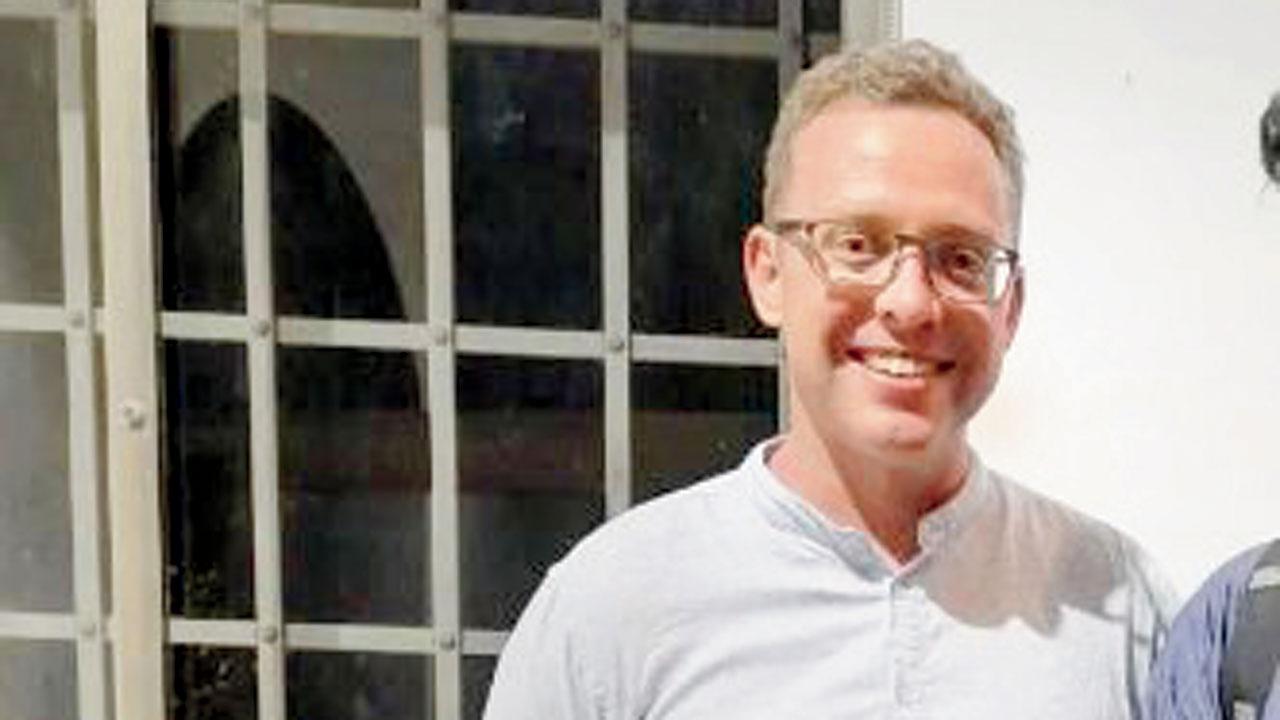 On an ordinary day, architect and civic historian Robert Stephens’ (inset) posts on Instagram barely fetch a score of likes. But a picture of an old library card (in pic, right) fetched him some 300 likes. The card in question is a membership card for The Asiatic Library that led Stephens to Arthur Crawford’s book, The Development of New Bombay. He recalled, “Back then, I was researching for Bombay Imagined and this was an important document. 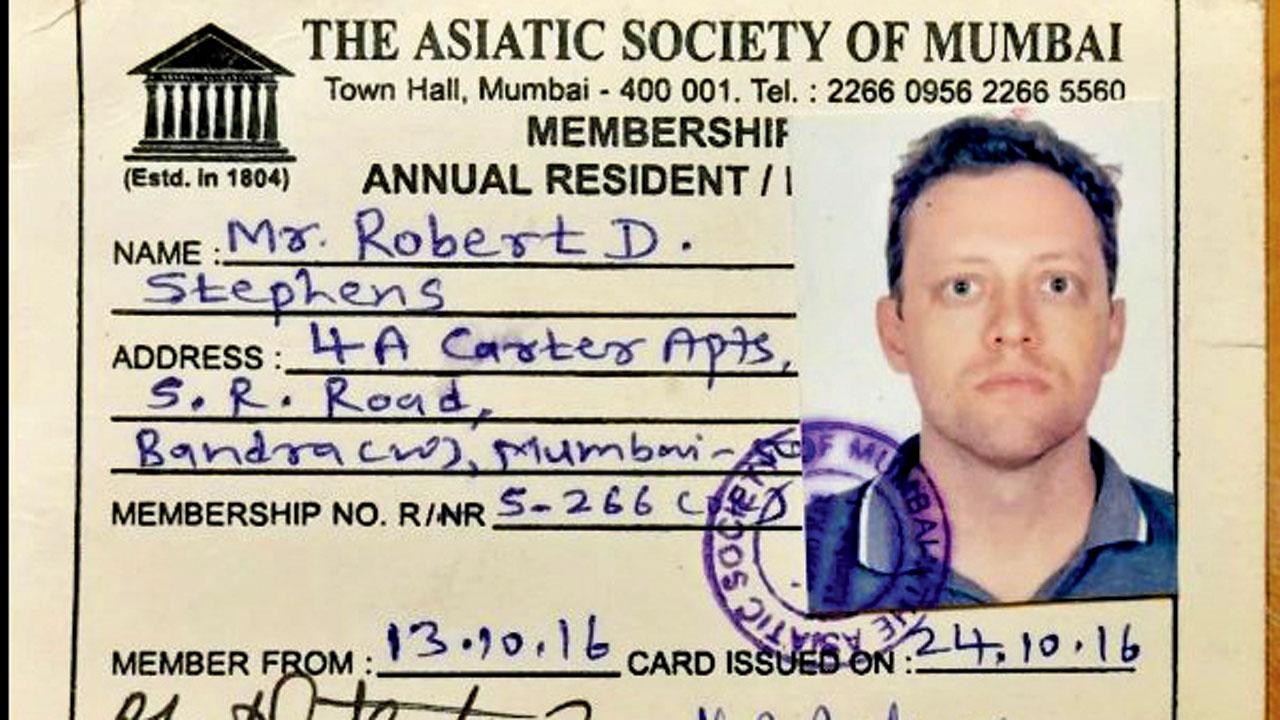 Accessing public libraries was difficult for me as I was also working at the time. I wrote to the University of Minnesota, which had the book, requesting them to send across a scanned copy. That didn’t happen because although they had the book, they didn’t have its coordinates. Then in 2016, after a lot of hard work for character references, I finally reached the Asiatic Society Library and the book was handed over to me in 20 minutes. I was overjoyed.” 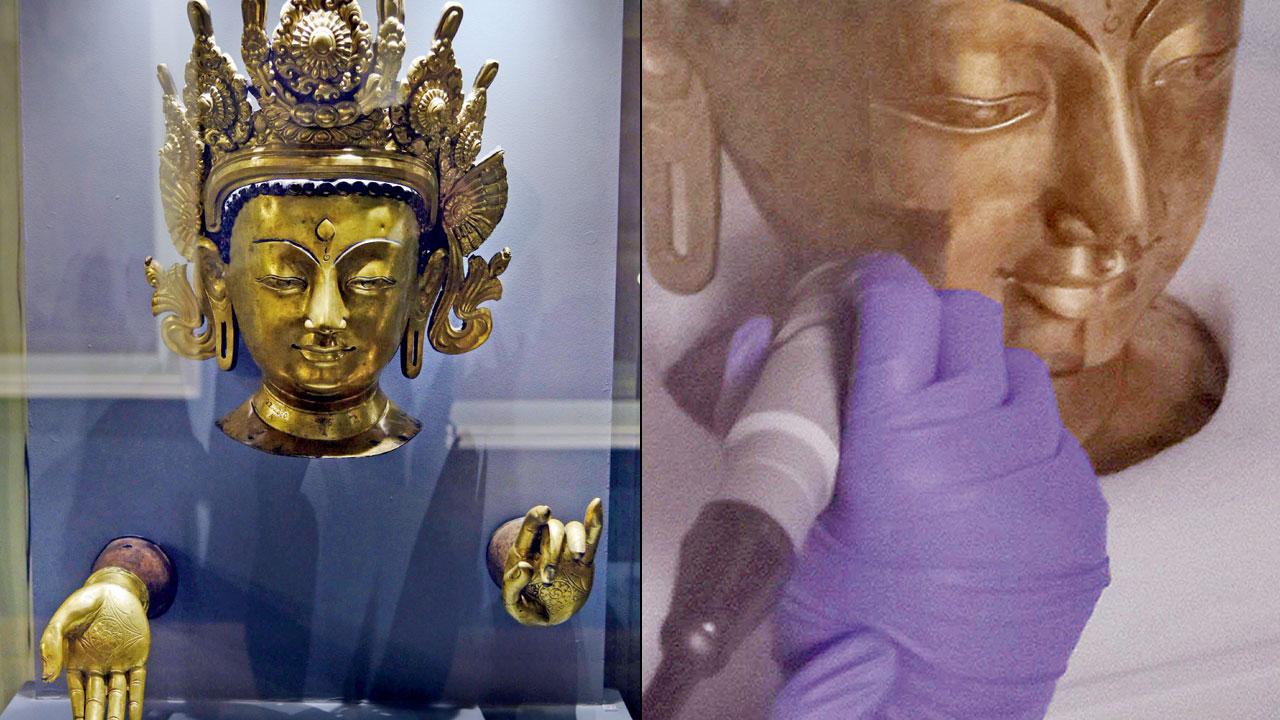 The 18th century CE Avalokiteshvara at ConservArte; (right) a close-up of the object with its dull coat

This diarist maintains a memo of city-based exhibitions she can experience either on her day offs or in the course of work. While some of these are ticked off, some aren’t. But not being able to view some displays doesn’t hurt as much as missing a gallery filled with exhibits from Sir Ratan Tata’s Art Collection. Although she missed a previous display at Chhatrapati Shivaji Maharaj Vastu Sangrahalaya, she made it in time for ConservArte — currently ongoing at their Karl and Meherbai Khandalavala Gallery — which houses a few objects from his collection, too. A Buddha statue greets us in tranquility. We learn the article is made up of gilded bronze (18th century CE, Nepal); the Avalokiteshvara — an earthly manifestation of Buddha, had a dull grey coat. The conservators at the museum removed it using YAG laser cleaning method. and now, it’s resplendent in its golden skin. The exhibit speaks of Vajarayana Buddhism that believes in the all-encompassing existence of protective deities whose main role is to protect and act compassionately.

Next Story : In Taloja creek, sand mafia has a free pass