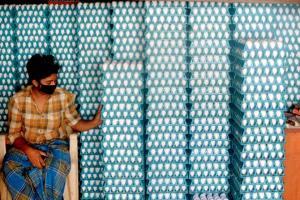 
Not the sunny side up

A trader awaits customers at the Sonapur market in Kurla amid the lockdown. Pic/Sayyed Sameer Abedi

After peacocks, leopards and squirrels, citizens under lockdown are waking up to the wonders of another species — flamingos. Several pictures of the pink migratory birds, whose numbers usually peak around April, have been doing the rounds on social media.

Sandeep Bangia, from the Navi Mumbai Environment Preservation Society, who lives in NRI Complex off Palm Beach Road, posted a clip of the birds taking off during dusk.

"These birds come every year. It’s just that we are so engrossed in other things that we forget to look around. Now that we are all locked up at home, we are appreciating nature. I can see 10,000 of them right now in front of me and it’s an amazing sight. Now that people are not walking along the lake, the flamingos have spread themselves out," he said. "We are trying to protect this paradise and hope it is declared a flamingo sanctuary," the Navi Mumbai resident added.

Fighting Corona, a song at a time

Doctors are not only on the frontlines in the battle against the virus, they are also in our homes, trying to keep our spirits high in these times. After mid-day reported about a group of doctors who run a social media page to keep people entertained during this period, another group of doctors came together to launch their first online concert, singing from home. The virtual session took place on Facebook yesterday and featured doctors from across the city performing live.

Dr Bipin Pandit, who is part of the collective called Sargam, said, "The current lockdown has been a challenging task for individuals across all age groups and is affecting the psychological and emotional well-being of many. This initiative aims to help people ease their stress and bring cheer in their homes, during the time of isolation and self-quarantine." The group, which was started by practising doctors who began performing at medical conferences, now performs across India.

Instituted in honour of the poet, novelist and artist, the Rabindranath Tagore Literary Prize recognises the revival of poetry and books that can change lives. The shortlist has been announced and three works by Mumbai-based writers have made the cut. These are Jonahwale by Ranjit Hoskote (poetry), Cobalt Blue by Sachin Kundalkar translated from Marathi into English by Jerry Pinto (literary fiction), and Paper Asylum by Rochelle Potkar (haibun).

"I’m elated that the prose-and-haiku form of haibun is getting accepted. In the standstill tunnel under Coronavirus, such news acts as a lamp to my literary journey. I hope to conduct an online haibun-writing workshop soon. Catharsis, for us, should come from writing, too," Potkar told this diarist. There was another "Bombay" touch to the shortlist as Varun Thomas Mathew’s The Black Dwarves of the Good Little Bay is also set in the city.

Their hearts beat for Mumbai

Despite being one of the worst-hit cities in India, Mumbai has been trying to hold on to its indefatigable spirit and motivate citizens. A recent four-and-a-half-minute video made by filmmaker Manthan Shah, his sister Roshani, and friend Ganesh Vanare does just that by creating a timeline of the past few weeks of the lockdown, highlighting the medical community’s fight and getting more than 80 influencers and videographers to spread awareness.

A screenshot of the video

"Vanare wanted to help spread some positivity in this time. So we approached many videographers and influencers who sent us video messages, urging people to stay home. Some of them sent us drone footage, while others are shots that I took. I edited them to create the video in three days. I’m really happy that people are appreciating this," said Shah.

The ongoing crisis has seen the emergence of partnerships of all kinds to help those from the underprivileged sections of the society. Take for example, khaanachahiye.com, an initiative to provide meals to those who do not have access to it, that has brought together restaurants, social workers and entrepreneurs alike. The citizen founded and led initiative with help from Project Mumbai has in a matter of 10 days built a supply capacity of over 10,000 meals a day and operates at 12 sites in the city. 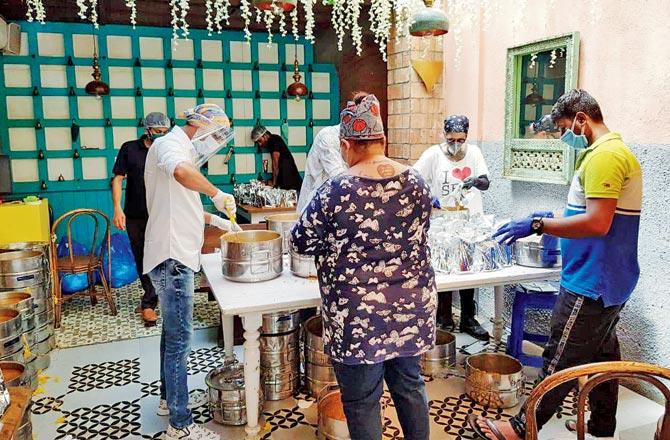 "This is an attempt to crowd-source the hunger map of Mumbai, measure the demand from those who need the food and marry it with the kitchen capacity. We started with a pilot on the Western Express Highway to feed over 1,200 people. Now, we have a team of over 50 people. If you know of a cluster of people who need our services, please inform us," said co-founder Ruben Mascarenhas. For more information, log on to the website or to effortsforgood.org.

Next Story : Rules of movement must be equal for all