Protesters demand complete rollback of 35 per cent rise in fees; institute says fees make up less than 10 per cent of revenue, stand firm on decision 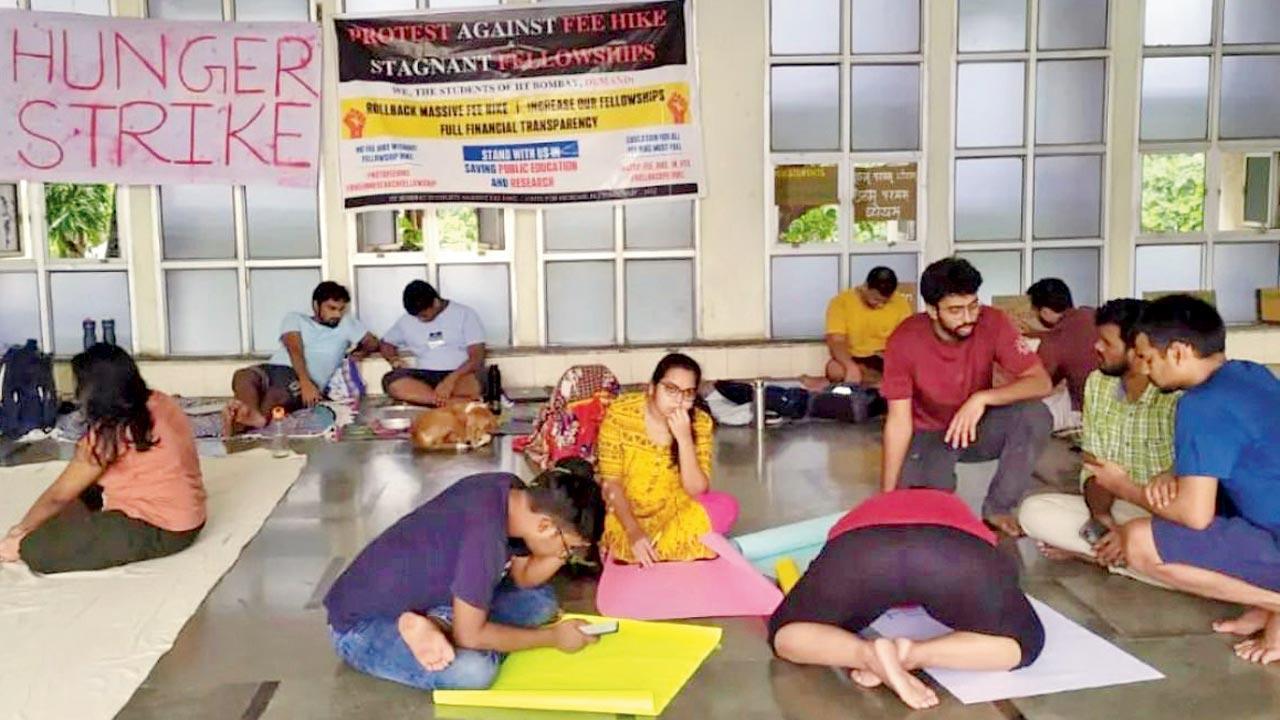 
Following the ongoing protests and hunger strike by students and research scholars over fee hike, the Indian Institute of Technology-Bombay (IIT-B) on Sunday issued a statement justifying its stand. The institute’s deputy director (finance and external affairs) made a presentation to the students to explain where fees are being spent, and what fraction of IIT’s expenses are covered by fees.

After almost 15 days of protest, students got a minor relief as administration earlier this week reduced R1,800 from the Semester Mess Advance component of the fee structure. However, students continued with a relay hunger strike starting Saturday, demanding a complete rollback of fee hike.

“The hostel amenities fees were already included in the Semester Mess Advance component. However, the hostel amenities fee was also collected under the semester fees under the new fee structure, resulting in double collection of fees for the same thing. We brought out the issue during the open house on July 26, and the administration has since corrected this error. Even though this reduces the overall cost amount, our protest is not over yet,” one of the protesting students said.

The institute stated that students who have economic difficulties, including those whose stipends are delayed by the sponsoring agencies, will be provided with a way to get a deferral of fees. IIT-B also declared that it will be working on scholarships for Masters students with financial restraints along the lines of scholarships for UG students. In addition, the students have been allowed to pay the semester mess advance in two instalments to avoid a significant burden at the start of the semester.

The statement issued by the institute read: “We are cognisant of the fact that several of our students have economic challenges at home, and we are fully supportive of such students. Following the open house, IIT-Bombay has taken several steps to address student concerns. Four student members from the elected student body have been added as permanent invitees to the fee committee.”

“While no one enjoys paying more than what they used to be charged before, it is also imperative that an institute continues to adjust its charges accordingly to stay alive and grow, to serve the students of today and tomorrow equally well,” it added.

Nearly 100 students at the premier institute in Powai area are currently protesting to raise their voices against the exorbitant fee hike in Masters and PhD courses at the beginning of July. According to information provided by students, the fee structure for both is increased by 35 per cent for the autumn semester.

Meanwhile, the institute said, “A small but very vocal number of IIT-Bombay students have been protesting against the recent fee hike. The IIT-Bombay administration had a meeting (open house) with students on July 26 to explain the reasons behind the fee hike and get students’ input on any issues. In brief, the bulk of IIT-Bombay’s funding comes from the government, with fees being only 8 per cent of our revenue. While tuition fees can never cover our overall costs, it is the expectation that the hostel-related fees will at least be comparable to the hostel-related expenses incurred. These operational expenses are well above the hostel fees we were collecting earlier, and even with the increased fees, the operational expenses are still more than the fees collected.”